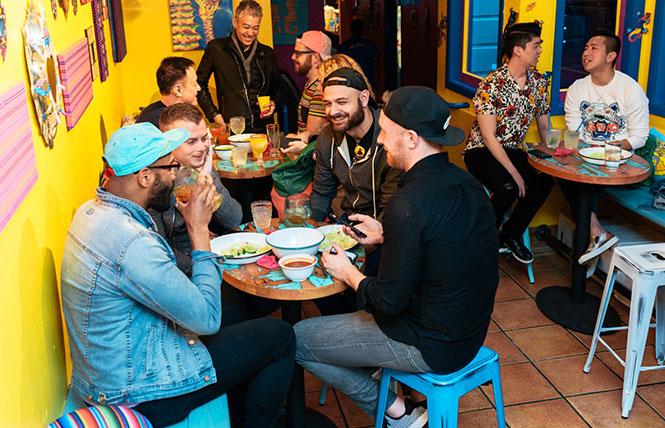 Opened on Cinco de May, the kitschy-cool Papi Rico brings a permanent Puerto Vallarta vibe to the heart of the Castro. Its frenetic fiesta decor begins with a wall of skimpy swimsuits that greets you at the front door. The mood is extended all the way into the sunny back courtyard, where a mural of studly beach boys gazes down upon a crowd that gives them a run for their money on sunny weekend afternoons. 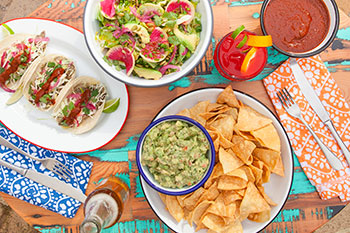 The star of the tight food menu is one of the city's best bargain bites: Big belly-filling quesadillas for only $5 and $6, depending on your choice of protein: The garlic sautéed prawn and tangy carnitas are standouts. Generously portioned shrimp ceviche and guacamole are also good bets.

The advance forecast for Pride weekend has temperatures in the mid-70s, so expect big crowds to gather at the back bar for Papi Rico's signature frozen drinks, including the Punta Negra, an intoxicating slush of tequila, lime, passion fruit and kicky habanero chile. Tequila, mezcal and socol cocktails flow freely and the beer selection includes five different Mexican imports.

Playing den mother, soul sister and-as needed-chief disciplinarian at this permanent beach bash is one of the gems of San Francisco's hospitality scene, Katrina Parlato. She keeps the fast-moving staff on its toes and works the room, checking in on guests with a smile as bright as the Mexican sun. 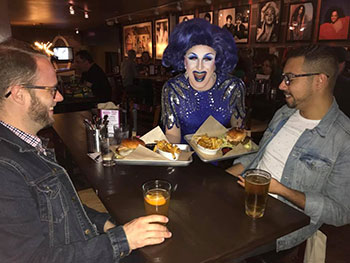 Mary me a little

Just down the block away is the reincarnation of local legend, Hamburger Mary's.
The original Mary's, a South of Market staple, opened in 1972, when burgers were the least of the meat up for grabs in that part of town (A nearby bar was named The Hungry Hole).

Before closing down after three decades in the same location (currently gay-friendly taproom The Willows, which does a solid burger of its own), the tightly packed favorite of the leather scene and its hangers-on developed an outsized reputation, attracting drop-ins by everyone from Divine to a young Chelsea Clinton.

Beginning in the late '70s, a small gaggle of Marys was spawned through franchising, with branches as far afield as Berlin (now defunct). Today, there are Mary's in seven states and, while some old school San Franciscans may scoff at the phenomenon as too commercial, the fact that gay iconography, double-entendre menu items, and servers in drag have found homes in the likes of Saint Louis, Milwaukee, and Jacksonville points speaks to a major cultural shift over time.

The months-old Castro location also wins points for finally putting a business in its prime gayborhood location, once home to another community favorite restaurant, The Patio, which closed in 1999. A vacant-eyed drag queen is always preferable to a 20-year vacancy.

And there's this: the juicy namesake dish, at $10 with most toppings, is well-priced and well-portioned at a hefty half-pound. In a city where burgers can cost twice that much once you add a slice of cheese, that's worth a Hail Mary.

Saturdays and Sundays feature drag performances at brunch, and for Pride weekend, reservations are recommended. 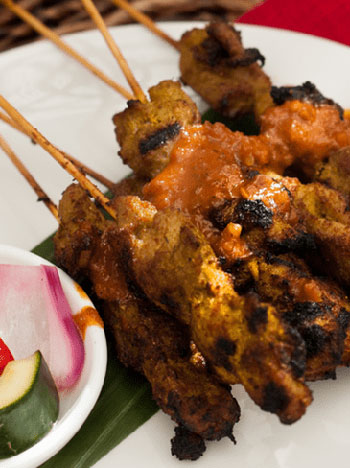 Looking to take out-of-towners out for dinner and quiet conversation after a Frameline screening at the Castro Theatre? The newest option for a more upscale dining experience in the neighborhood is Indo, a San Francisco location of the successful Palo Alto restaurant featuring "Indonesian-fusion" cuisine and a warm, relaxed atmosphere.

No need to fear the unfamiliar: Chef-owner Diana Anwar incorporates favorite Indian and Thai flavors in dishes like green seafood curry, pad Thai noodles (including a version with lobster), and lamb korma as well as venturing into authentic Indonesian specialties:

Instead of a papaya salad, consider opting for gado gado, which features vegetables, hard boiled egg, tofu and crispy crackers, all drizzled in a distinctive peanut sauce.
Another salad option-and perhaps the menu's most traditional Indonesian dish-is rujak manis, morsels of vegetables and fresh fruit to be dipped in a pungent sweet-and-spicy sauce made with tamarind and shrimp paste.

The fusion dishes aren't limited to Asian hybrids. Anwar works western favorites into the mix as well with the likes of osso bucco served in a red coconut curry sauce and Norwegian salmon scented with kaffir lime and chili. 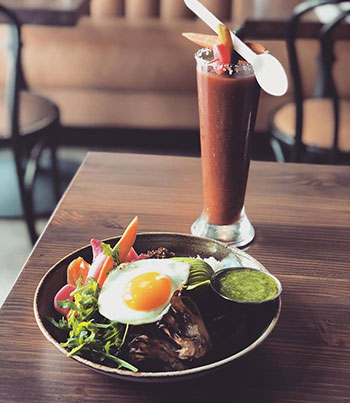 The neighborhood's most recent opening is Wooden Spoon, a breakfast-and-lunch-only spot in the former Aatxe space at the Swedish American Hall. With cute country kitchen décor, including a mini-mural made of its namesake utensils, this is a welcome alternative to old reliable Café Flore and a worthy successor to the late lamented Blue.

If you're looking to eat even lighter, there are pastries and Sightglass coffee to enjoy around a communal table. And, this being the Castro, there are cocktails-but they're specifically concocted for day drinking, including a Breakfast Spritz with bubbly, aperol and white peach puree and whisky spiked "Coffee du Nord." 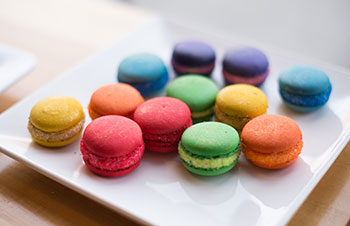 When Judy Kahn decided to cook up something special to celebrate Pride this year at her Mission District bakery, Kahnfections, she knew that rainbow colors alone wouldn't cut it. From the rainbow layer cakes that draw oohs and aahs on the counter at the Castro Fountain, to the infestation of Technicolor cupcakes all over town, brightly hued June goodies are old hat in this town.

But Kahn's concocted something to take things up a notch: Her rainbow-toned macarons come with built in beverages; cocktails, to be more precise.

Kahn stirs up batches of seven mixed drinks that she then uses to infuse rich buttercream fillings. While each macaron's middle is white, the colors of the almond meringue cookies that sandwich them indicate their cocktail flavos: Red holds strawberry daiquiri; orange, Bellini; yellow, pina colada; green, Midori sour; blue, blue moon; and violet, purple haze.
Because the macarons are baked before they're filled, the alcohol is not cooked off, which makes these cookies a little kicky. Why not belly up to the bakery and give them a shot?