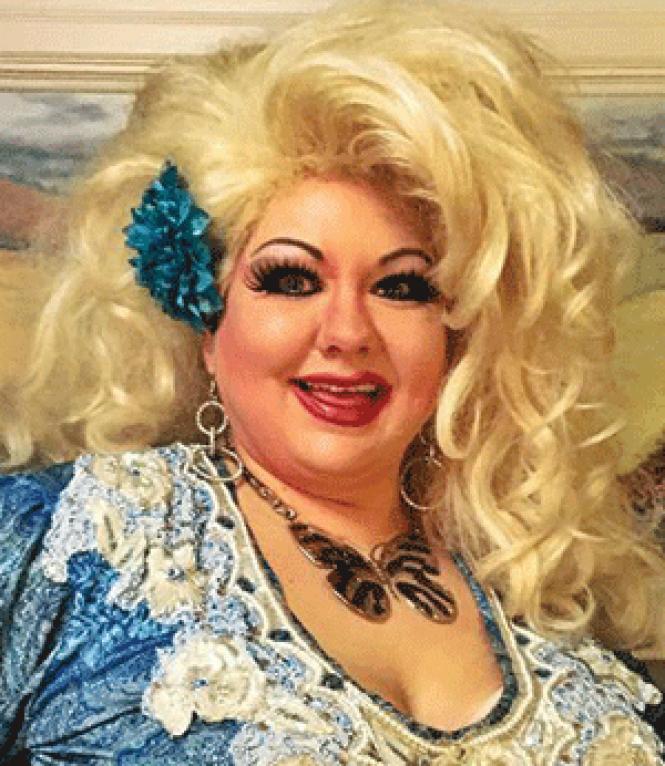 Deana Dawn couldn't be happier about being honored at this year's Pride parade with the Audrey Joseph LGBTQ Entertainment Award.

The award, given by the San Francisco LGBT Pride Celebration Committee board, recognizes those who have made a significant impact on the LGBTQ community through artistic expression. It is named for Joseph, the former longtime Pride main stage producer.

"Women didn't always get a nice reception in gay bars back then," she told the Bay Area Reporter. "It took a few years to find my niche and I found those bugle-beaded queens in the Imperial Court. Once again I was embraced by queens and most of them didn't make an issue that I was a girl in drag."

Dawn's star began to rise when she became a performer at gay rodeos â€" it made her happy to see that many of these events served as fundraisers for charities that are near and dear to her heart.

"I was hooked after one gay rodeo event where they raised money for nonprofit groups. I jumped into the gay western lifestyle by first earning the fundraising titles of Ms. Bay Area Rodeo 2001, Ms. Golden State Gay Rodeo 2002 and Ms. IGRA first runner-up 2003," she said, referring to the International Gay Rodeo Association. "I was required to learn to ride, but it was worth the saddle sores to be able to give back to the community while living my dream as Dolly Parton. The IGRA taught me to be a leader and for that I'm forever grateful."

Dawn said that Parton, perhaps the most famous figure in country music, played a major role in influencing her career path. Parton has also consistently been an outspoken LGBT ally.

"Dolly Parton is my idol," she said. "Since I can remember I have loved her elaborate costumes and amazingly big, blonde hair. Dolly's iconic joviality, talent and rags-to-riches story showed me that anything was possible, even for a country girl like me."

For Dawn, though, fundraising has been the icing on the cake.

"Early in life I learned that giving back is rewarding," she said. "As a kid, my wonderful mom took me to volunteer at nursing homes to visit the elderly. I'd help her hold craft and bake sales for charity. She's a dedicated volunteer to this day whose passion is child abuse prevention. I owe my love of paying it forward to mom."

Dawn has used her drag talent to help more than 30 charities, including the AIDS and Breast Cancer Emergency Funds, Pets Are Wonderful Support, Richmond/Ermet Aid Foundation, the Transgender Law Center, and Jazzie's Place.

Dawn, also known as Deana Hemrich, talked about the origins of her name and what drag means to her.

"My given first name is Deana," she explained. "Deana Dawn was created on the second Trannyshack bus to Reno in 1999," she said. "I had a wild, red wig that came with the name Dawn. By the end of that crazy trip, the two names joined and it stuck like spirit gum. Drag is a creative outlet by which you can express yourself and be inspired by life. It's an incredibly empowering state of mind, and once that wig goes on, you can conquer the world."

"Drag increased in popularity because of television," she said. "RuPaul's Drag Race made it accessible by showcasing it to the general public. Drag remains popular because it's larger than life, fascinating and hilariously entertaining while having the ability to heal at the same time."

Like many San Francisco residents, Dawn expressed her hopes that the housing affordability and income inequality issues that currently plague the city will be resolved so that many of her fellow performers in the LGBT community can continue to find a safe and welcoming haven in the city.

"The most important issue in San Francisco is the dividing financial gap between the classes and people losing their housing to new developments," she said. "The need for affordable housing is a dire situation that we must continue to fight for to keep San Francisco a welcoming melting pot for residents that can't find acceptance elsewhere. Here your friends are your family that look out for each other."

Dawn said that this year marks her 25th as a Pride parade participant.

"I will march not just for myself, but for all the fabulous queens that lead the way," she said. "Long live the queens!"