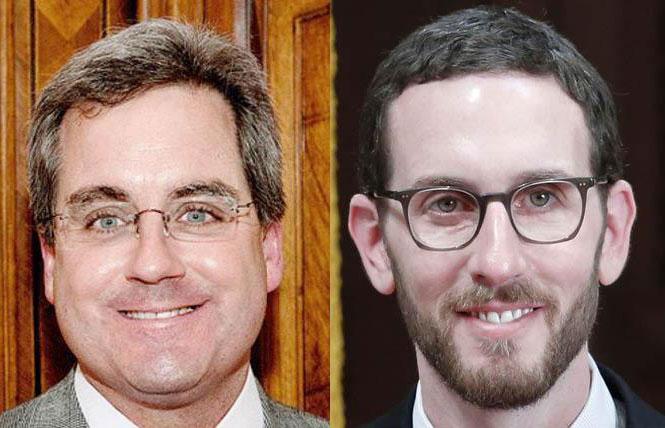 Among the list of district attorneys and state lawmakers with law degrees who could be tapped by Governor Gavin Newsom as the state's next attorney general, there is one name that could lead to San Francisco having the second gay man serving in a citywide municipal office.

City Attorney Dennis Herrera, who defended Newsom when he served as San Francisco mayor, most notably when Newsom defied state law and ordered city officials to marry same-sex couples in the winter of 2004, is in the mix of the dozen or so people speculated as having a chance at being California's top law enforcement officer. The governor will need to name a successor to Attorney General Xavier Becerra if he is confirmed as the country's next Health and Human Services secretary.

President-elect Joe Biden has nominated Becerra to head the federal agency, and Becerra has already begun to reach out to senators ahead of his confirmation hearing next year. It won't take place until after Biden is sworn in January 20.

But with Newsom naming another Latino lawmaker, Secretary of State Alex Padilla, Tuesday to succeed Vice President-elect Kamala Harris in her U.S. Senate seat, as had been widely speculated, the governor will be facing even more pressure to tap a non-Latino for AG, perhaps Contra Costa County District Attorney Diana Becton, a former judge who is African American. It is also speculated that Newsom will name former San Francisco supervisor Malia Cohen, a Black woman now on the state's Board of Equalization, to succeed Padilla as secretary of state.

Had Newsom named another Black woman to the Senate seat, such as Congresswomen Barbara Lee (D-Oakland) or Karen Bass (D-Los Angeles), then Herrera was thought to have a leg up in the AG contest. There is also the possibility of seeing Herrera depart as city attorney for a position in the Biden administration.

Herrera, first elected city attorney in 2001, did not respond to the B.A.R.'s request for comment. Should he step down it will be up to San Francisco Mayor London Breed to name his replacement. And that person would not have to run until November 2022 to serve out the remainder of Herrera's term, which runs through January 2023. (The city's sole out elected municipal officeholder is Treasurer-Tax Collector José Cisneros, who is also up for reelection that year.)

Among possible candidates are three gay men who all worked in city attorneys' offices. Gay state Senator Scott Wiener (D-San Francisco) worked for Herrera as a deputy city attorney alongside state Assemblyman Rob Bonta (D-Oakland), a straight ally who is also among those mentioned as a possible AG pick for Newsom.

Wiener and Breed are closely aligned, with Wiener going from solely backing her gay opponent, former state senator Mark Leno, to dual endorsing the two candidates in the special June 2018 mayoral race. Asked by the B.A.R. about possibly being named as city attorney, Wiener said he didn't want to speculate about what could happen.

"Obviously, I love the San Francisco City Attorney's office. I spent almost a decade there; it is just an amazing place," said Wiener. "I am not going to speculate on what may or may not happen. I love being a senator."

He noted that the governor has a strong list of possible candidates to name as the next AG. Those most frequently mentioned include Assemblyman David Chiu (D-San Francisco), gay Equality California Executive Director Rick Chavez Zbur, and Maggy Krell, chief counsel of Planned Parenthood Affiliates of CA.

"Dennis Herrera would be a fantastic AG; he is just exceptionally qualified for that role. There are other really strong candidates," noted Wiener.

Another potential city attorney pick would be gay District 8 Supervisor Rafael Mandelman, who is seen as having a good working relationship with Breed and had been a deputy city attorney in Oakland prior to being elected to the Board of Supervisors two years ago.

"I think we have a great city attorney now," Mandelman told the B.A.R. "I am not going to speculate about his career. I wish him the best and I think he would be an awesome AG."

A less likely pick for Breed would be gay former supervisor David Campos, a progressive who chairs the San Francisco Democratic Party. Campos also worked for Herrera's office years ago and has long been talked about as likely to run to succeed him whenever he decides to depart. Selecting Campos would require him to step down as party chair and could make it less likely he would run to succeed House Speaker Nancy Pelosi (D-San Francisco) when she retires.

"We'll see. I don't have any control about the future. We'll see what happens," said Campos when asked by the B.A.R. about the political musical chairs that could be underway in the new year.

For now, Campos said he is focused on his new job being chief of staff for San Francisco District Attorney Chesa Boudin.

"I love the job. I'm inspired every day to work with the people in this office, and the more you get to know Chesa Boudin, the more you admire him," said Campos. "It's a great partnership. I have a great opportunity to reform a system that needs reform."

Others seen as potentially seeking to succeed Herrera, whether via appointment or the ballot box, are Chiu, former supervisor Jane Kim, and District 2 Supervisor Catherine Stefani.

Cristine Soto DeBerry, a former deputy chief of staff when Newsom was mayor of the city who now is executive director of the Prosecutors Alliance of California, told the B.A.R. that she doesn't expect Newsom to make any announcements on filling the AG post until closer to Biden's inauguration. While she wouldn't say whom her organization wants to see be named AG, DeBerry did say the person would need to focus on enacting public safety reforms.

"We are excited about this opportunity for California and have a lot of optimism about what a new AG will be able to do around criminal justice issues for our state," she said. "It is a massive job with a lot of responsibility. He will need to choose somebody capable of navigating a range of issues. What is undeniable is that criminal justice reform and police reform are at the top of the agenda no matter whom he appoints."

Campos vies for CA Dem vice chair
One position Campos is not being coy about wanting to serve in is vice chair of the California Democratic Party. In announcing his bid for the post Monday, Campos noted he would be the first formerly undocumented person in the Golden State's history to serve in the state's Democratic Party leadership.

With his sister clinging to his back, Campos at the age of 14 entered the country without legal permission, along with his parents, as the family had fled political turmoil in their native Guatemala. They settled in South Central Los Angeles, and after high school, Campos left for Stanford University then headed east for Harvard Law School.

It was in Cambridge where he met his longtime partner and husband Phil Hwang. The couple moved back to the Bay Area when Campos was hired in 1999 as a deputy city attorney representing the San Francisco Unified School District in its school desegregation efforts.

He was elected in 2008 to succeed gay former District 9 Supervisor Tom Ammiano, who departed to serve in the state Assembly. After losing his bid years later to succeed Ammiano in the city's 17th Assembly District seat, Campos took a job as one of Santa Clara County's deputy county executives until being hired by Boudin this fall.

For the past three years Campos has chaired the San Francisco Democratic Party and was reelected to the position in the spring. He has worked closely with Pelosi to marshal the energy of the city's Democrats into helping elect the party's congressional candidates across California and the country.

Now Campos wants to ensure there is a progressive leader among the top ranks of the state party's leadership. In recent years, moderate candidates have routinely won hotly contested races for party chair against progressive challengers.

Already in the race for the party's two vice chair positions are a pair of Asian American women: California State Controller Betty Yee and Jenny Bach, the current party secretary. The vote will take place at the 2021 California Democratic Party Convention being held on Zoom April 26 to May 2.

"This is an important moment in California history," stated Campos. "Post-Trump and post-pandemic we have an opportunity to reach out to communities that have felt disconnected or abandoned by our party and work with them to create real, meaningful change. There's lots of work to be done."

Keep abreast of the latest LGBTQ political news by following the Political Notebook on Twitter @ http://twitter.com/politicalnotes