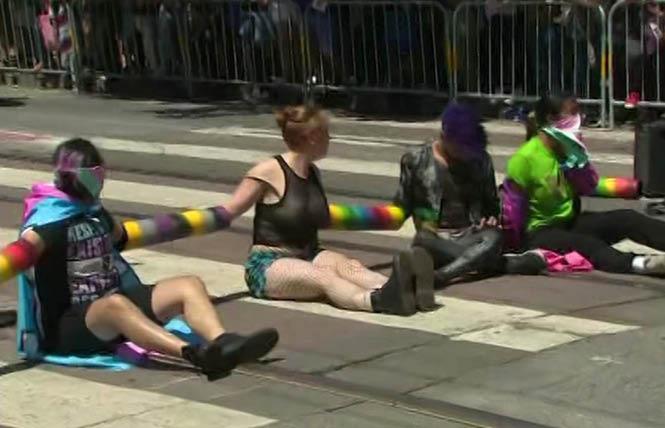 Protesters blocked the San Francisco Pride parade June 30, 2019. One of two people who were arrested, but who said they were not blocking the street, has sued the city of San Francisco in federal court. Photo: Courtesy ABC7 News

One of two people who were taken into custody during an anti-police protest action at the 2019 San Francisco LGBT Pride parade filed a federal lawsuit against the city and four police officers, alleging nine claims for relief, including violations of their constitutional rights, battery, and false arrest and imprisonment.

According to a complaint filed in the United States District Court for the Northern District of California August 6, Taryn Saldivar, who identifies as a nonbinary dyke and who at the time was 21 years old and lived in Oakland, had their glasses and cane broken by police.

"The police officers' actions were completely inappropriate and violative of my client's rights," Saldivar's attorney, EmilyRose Johns, told the Bay Area Reporter during a phone interview. "My client suffered substantial injuries as a result of this. It was brutal - inexplicable why they would treat my client this way."

Johns said that her client was not available to talk to the B.A.R. for this story.

As the B.A.R. previously reported, during the June 30, 2019 Pride parade up Market Street, a small group of protesters broke through the barriers along the parade route, stopping it on Market Street near Sixth Street. The protesters' arms were interlocked, covered by rainbow painted pipes as they spread themselves across the street.

The protesters were demonstrating against police and corporate participation in the parade and blocked the procession for nearly an hour, during which time police and SF Pride organizers negotiated with them.

The protesters agreed to leave, but two people were arrested by the San Francisco Police Department, including Saldivar, who according to the complaint was not one of the individuals blocking the parade route.

An online video posted to Twitter shows Saldivar being shoved to the ground by a police officer, who allegedly broke Saldivar's cane in the process of arresting them. Later on June 30, Saldivar was released and subsequently "transported by ambulance for non-life threatening injuries," according to a contemporaneous SFPD statement.

Saldivar had been on the sidelines leading the protesters in anti-police chants, the complaint states. Johns said that the arrest was in retaliation for these chants. The lawsuit states that retaliation for the chants is "the only reasonable conclusion" to the question of why police would arrest Saldivar.

According to the San Francisco Examiner, which first reported this lawsuit, Saldivar was arrested on suspicion of battering a peace officer, "resisting arrest and interfering with a parade route."

As the B.A.R. reported March 5, these charges were dropped by San Francisco District Attorney Chesa Boudin, as were charges against Kenneth Bilecki of Santa Rosa, who was also charged with resisting arrest and interfering with a parade route. The San Francisco LGBT Pride Celebration Committee had asked for the charges to be dropped.

Suit: City 'failed in its obligation' to train police
The complaint describes the events documented in the Twitter video, alleging that one of the officers - Lieutenant John Burke - "has a documented history of targeting peaceful protesters violently."

It then goes on to list the nine claims for relief, beginning with the claim that Saldivar's rights enumerated in the First Amendment to the U.S. Constitution were violated.

"The assault and arrest of plaintiff Taryn Saldivar was motivated by their constitutionally protected speech," the lawsuit states. "The actions of defendants Lieutenant John Burke, Officer Ryan Gonzalez, Officer Rudy Paredes, and Officer David Hoang were committed with the intent to chill and interfere with plaintiff's constitutionally protected right to speech, assembly, and association."

The second claim alleges that the "excessive force" used in Saldivar's arrest constitutes a violation of the Fourth Amendment right to be free of unreasonable searches and seizures.

The third claim alleges that the officers failed in their "duty to intervene in unlawful uses of force and report such observations to their superiors."

The fourth claim alleges that the City and County of San Francisco "failed in its obligation to adequately train and supervise its police officers" in protecting the constitutional rights of citizens and that the city and county was "deliberately indifferent to the obvious consequences of its failure."

The fifth claim alleges that the Americans With Disabilities Act of 1990 was violated.

"Mx. Saldivar suffered a nondisplaced radial fracture of their right wrist, a partially displaced left hip, and a concussion from the unjustified brutality of [the] defendants," the complaint states. "They also suffered the indignity of having their disability appliance mishandled and broken by San Francisco Police Department officers and used against them to harm them and cause them pain."

The sixth claim alleges "malice and oppression" through the use of "threats, intimidation or coercion with the rights of [the] plaintiff ... secured by the Constitution of the United States."

The seventh claim alleges false arrest and false imprisonment, which claim Johns says is backed up by the dismissal of the charges against Saldivar.

The eighth claim alleges battery by a police officer against those who "intentionally subjected plaintiff ... to harmful or offensive contact."

The ninth and final claim alleges negligence, breach of which duty to not use excessive force "was the proximate cause for [Saldivar's] harm."

The complaint asks for the "incurred costs for medical bills and related expenses" to be paid, as well as for punitive damages, and requests a trial by jury. The lawsuit does not specify a dollar amount.

According to an August 11 court filing, Saldivar's attorney has consented for a federal magistrate judge to oversee the trial instead of an Article III judge, which refers to a federal judge nominated by the president and confirmed by the U.S. Senate.

This was seemingly confirmed by John Cote, the communications director for San Francisco City Attorney Dennis Herrera, in an email response to the B.A.R.'s August 12 request for comment.

"I don't know if we've even been served with this yet," he wrote.

Cote wrote to the B.A.R. August 14 a brief statement: "We'll review the case and address it in court."

Johns said she was planning to serve the city attorney soon, and that the COVID-19 pandemic has complicated this part of the civil procedure process.

When asked for comment, the San Francisco Police Department referred the B.A.R. to the city attorney's office.

SF Pride, of course, has its roots in the 1969 Stonewall riots in Greenwich Village, New York, when LGBTQ people rose up against police violence toward them.

After the 2019 protest and arrests, San Francisco Police Chief William Scott apologized to the LGBTQ community for historic mistreatment, such as the events that led to the Compton's Cafeteria riot in 1966.

"I and the men and women of this police department are truly sorry," Scott said at that time. "We're sorry for what happened and we're sorry for our role in it and we're sorry for the harm that it caused. Some here tonight may ask, 'why now? Why are we doing this now?' And for those of you that might wonder why, I say it's because we are listening. We hear you. And because it's time."

As the B.A.R. reported in February - before the COVID-19 pandemic led to the cancellation of the parade for the first time since its launch in 1970 - the SF Pride board of directors opted not to ban Google, its affiliate YouTube, and the Alameda County Sheriff's Office from the parade and festival after a push by some of the Pride membership. (The Alameda County Sheriff's Office had not participated in the parade in years past, but the proposal was made in the wake of its role in the January 14 eviction of four homeless women and their children who had been occupying a vacant house in Oakland.)

The push for the bans was made by two former Google employees, alleging the company was aiding and abetting homophobia by failing to ban a conservative comedian who Carlos Maza, a YouTube content creator, said was directing his followers to harass him. The comedian, Steven Crowder, called Maza a "lispy queer," among other homophobic and anti-Latino slurs. Google has since updated its harassment policies.

During a June interview with the B.A.R., SF Pride Executive Director Fred Lopez said SF Pride's leaders were discussing the issue of police participation and that there is an ongoing reassessment, though he did not want to state anything definitive about continued police participation in SF Pride, or what other changes will be made going forward.

Lopez and Carolyn Wysinger, the president of the SF Pride board, were contacted for this story and were asked about the current state of those discussions, but the B.A.R. did not receive a response.

Alex U. Inn, a longtime community activist, coordinated with others in launching the People's March down Polk Street for this year's Pride June 28. Inn has told the B.A.R. that the march will continue in the future. Inn had been on the SF Pride board for part of last year, and was a community grand marshal in 2017.

The People's March seeks to return SF Pride to its more activist roots, embracing the Black Lives Matter movement as cities across the nation erupted in protest following the police killings of George Floyd, Breonna Taylor, and other people of color.

In a text message to the B.A.R. Inn said that the police response to the 2019 protest was excessive.

"I've seen the video tons and I saw a version of it before anybody published it and I just can't not only get over how they treated them, but can't get over how if you watch closely, one of the cops punches them as they stand up and think that's perfectly fine," Inn stated. "Why was that necessary and why were so many of them on their body and had their legs like a pig on a stick ... didn't respect them at all."

Inn wrote that the long-standing issues of corporate and police participation in the parade led to this year's People's March.

"Until they [SF Pride] decouple themselves from corporations and police departments that do not take care of our community then they will always be in the same light as our oppressors," Inn wrote. "That's why JUANITA MORE! and I found it important to bring our pride celebration of who we are and how proud we are especially to be Brown, Black, Indigenous people of color, trans and queer. The People's March was led by Brown and Black people who need to be honored at our 50th anniversary because without them we would not have the freedom, or the illusion of freedom, that we have today."