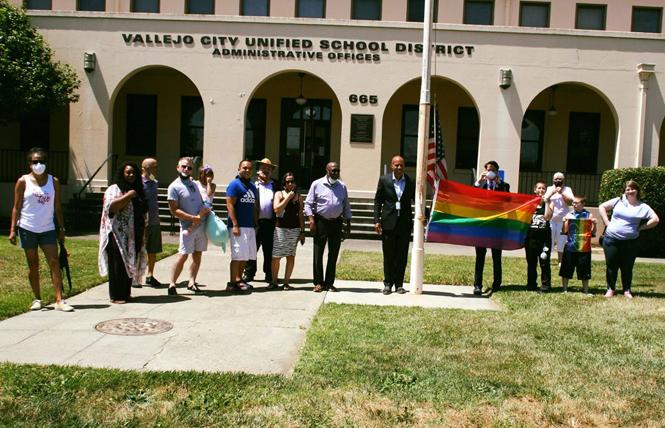 Two years ago voters in Dixon, California overwhelmingly ousted from office a city councilman who had written a homophobic newspaper column in which he called for holding a "straight Pride" event. Thus, LGBT advocates in Solano County were hopeful of seeing the small town's mayor and City Council declare this June as Pride Month.

Similar to their counterparts in two other Bay Area counties — Contra Costa County on the other side of the Delta and San Mateo County on the Peninsula — Solano LGBT leaders and allies had hoped to see all seven of their county's cities this year celebrate Pride Month in some manner. Benicia and Vallejo are both flying the rainbow flag, as is the county government and the Vallejo Unified School District.

The cities of Fairfield, Rio Vista, Suisun City, and Vacaville all issued proclamations recognizing June as Pride Month. And at the request of its mayor, Lori Wilson, Suisun City for the last year has displayed the rainbow flag inside its City Hall on a recessed shelf alongside various awards the municipality has received.

With less than a week left to the month, Dixon remains the lone holdout thwarting Solano County from achieving a countywide Pride observance. San Mateo County officially did so last Wednesday when Atherton was the last of its 20 cities and towns to issue a Pride proclamation. Moraga will make it official for Contra Costa County with its June 24 issuance of a proclamation for Pride Month.

Jonathan Cook, executive director of the Solano Pride Center, the county's LGBT community center located in Fairfield that hosts its annual Pride event in the fall, told the B.A.R. his organization had reached out to all seven cities this year about Pride Month. The center felt it was especially important for the individual cities to observe the annual LGBT celebration in light of the novel coronavirus outbreak resulting in people having to shelter at home.

In the sprawling and largely rural county, the health crisis has increased concerns that LGBT residents will be even more isolated and lonely, noted Cook.

"The reason we think it is important to have the Pride flag raised in each of these cities is to show visibility for the LGBTQ community," said Cook, who had to shutter his center's physical location and turn to offering its programs and services remotely online or over the phone. "We know when there is greater visibility and acceptance of LGBT people there are lower rates of suicide ... if we can show one person they are recognized for their diversity, our hope is we can end any other deaths because of homophobia and stigma."

Fairfield resident Quinten Voyce, a gay schoolteacher who is seeking reelection this fall to the Solano Community College board of trustees, noted while "Dixon has a complicated past," the uproar its former council member caused led to many LGBT residents of the county meeting for the first time.

"We organized a Pride picnic in response and held it outside the City Hall in Dixon in a park there. A couple hundred people showed up," recalled Voyce, 34, who grew up in Suisun City.

Voyce is one of two out elected leaders in Solano County and the highest-ranking due to representing several cities on the community college board. He is currently president of the college's oversight body, which issued a Pride proclamation.

There is no LGBT neighborhood for county residents to gather in and meet, noted Voyce. Their focal point is the Solano Pride Center, he told the B.A.R.

"The Pride center really does help to unify the LGBT community across the county," said Voyce. "Having support from the county and seeing in your backyard at city hall the Pride flag, it is just important to know your city stands with you and acknowledges you as a part of that city." 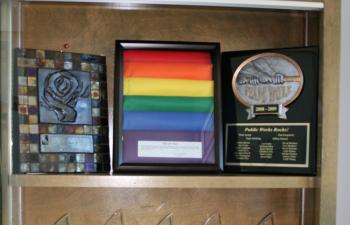 Mayors set tone
As the mother of a transgender son, Wilson, the Suisun City mayor, has made it a priority to celebrate her city's LGBT community. Because it doesn't fly commemorative flags on the flagpole in front of its City Hall, Wilson installed the rainbow flag display inside the building near the entrance.

She told the B.A.R. that it would remain there for as long as she is mayor. Except for one of her council colleagues, Wilson has not received any negative feedback from the public about the Pride flag display.

"We celebrate not just in June but all year long," said Wilson, who was first elected to a council seat in 2012 and elected mayor in 2018. "We want our LGBT residents to know they are a vital part of our community. There is no us versus them here; there is a we when it comes to this community."

Wilson's son, who asked that his name be withheld as he is not completely out, told the B.A.R. his hometown is accepting of LGBT people almost to a fault.

"Honestly, everybody has been really so great and supportive around here when it comes to that, it wasn't as big of a deal as I think it should be," he said of the rainbow flag display his mother installed in City Hall.

With the city looking at re-landscaping the grounds of its municipal building, Wilson is hopeful a second flagpole can be installed behind City Hall that would be visible from its downtown waterfront neighborhoods. It could be used to fly the rainbow flag and other commemorative flags it has also been asked to raise but unable to do so to date.

"It would be a great way to display cultural month flags and things like that," she said. "We need a place to put on full display the diversity and mix of our community."

Benicia Mayor Elizabeth Patterson saw first hand how important it was for straight allies to signal their support for the LGBT community when she showed up to an event in Vallejo in 2015 celebrating the U.S. Supreme Court ruling in favor of same-sex marriage. She had just landed after a 22-hour flight from India, and rather than go home, she had her daughter drive her to the gathering.

"The then-mayor of Vallejo was not friendly of those principles, so people were so thrilled to see the mayor from Benicia. Even though I was still in the clothes I had been in the last two days," joked Patterson.

Ever since then she has made sure her city flies the Pride flag in June, though she noted it took a few years for Benicia to figure out its flag raising ceremony.

"We've gotten better about it. Initially, nobody would show up," she said. "No one was paying attention, so there was no protest, no cheering, nothing."

This year, the city held a small gathering due to the health crisis. Patterson, who has served three terms as mayor since first being elected in 2007, is confident her successor will continue raising the Pride flag. She plans to retire when her term ends this year and focus more of her energy and time on addressing climate change.

"Solano for a long time, particularly up county, had a reputation as being not as open to the LGBTQ community. And indeed there were some Facebook postings a few years ago in a campaign that would indicate that," said Patterson. "But by and large that Supreme Court decision, I think, made a big difference. God bless young people, they don't have the same hang-ups as older people have."

Wilson told the B.A.R. she did reach out to her counterpart in Dixon about why recognizing Pride Month is more than just a symbolic gesture.

In reversal, Foster City will fly Pride flag
Sign up!