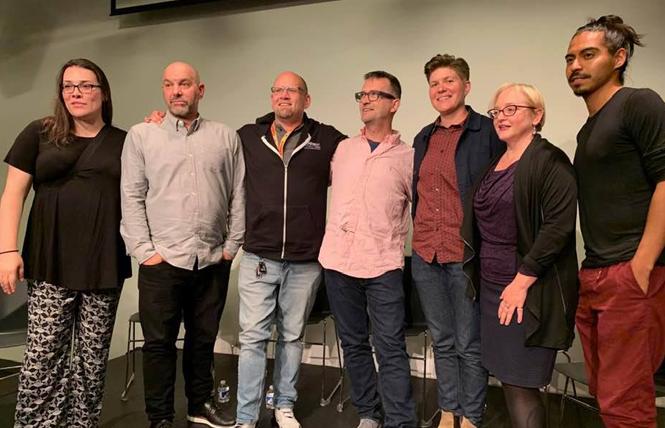 San Francisco's programs dealing with the city's epidemic of methamphetamine use are "just not working" effectively, a local nonprofit executive told a packed audience attending a town hall meeting on meth use in the queer community.

"The status quo is inappropriate," said Billy Lemon, a gay man who is executive director of the Castro Country Club, a nonprofit that serves as a clean and sober gathering place for all people and a home for the queer recovery community. As the head of the country club for the past three years, Lemon has observed hundreds of people seeking help with their addiction.

"The 90-day treatment programs just aren't working, from what I see at my job," he said. People often "cycle in and out" and face a "serious" lack of supportive services when they finish their three-month program, he added.

"I was fortunate," said Lemon, who found subsidized housing, which turned out to be a "golden ticket" that allowed him an extra year "to work on myself."

And lucky in other ways, he said.

"I could've faced time in federal prison for shipping copious amounts of drugs, but fortunately there's a statute of limitation so I'm OK," he said, drawing laughs from the audience during an otherwise somber event.

Now, in the city, "housing is a nightmare," he said. The city has got to figure out a way to create sober living environments for people who need a little more time to figure out what they want to do next, he added.

After 10 years of drug use, which put him in a "very dark place," Lemon said, "finding a community of support saved my life."

Lemon, who has been sober for over five years, said that his drug use began while he was dealing with wanting to connect with other gay men, which led to injecting drugs.

For Lemon, that community of support came from the people and services at Stonewall Project, a drug and alcohol treatment program providing harm reduction-based counseling that integrates substance use, mental health, and HIV prevention and education. It is part of the San Francisco AIDS Foundation.

"I went there every day for seven months and just cried," he said.

Others on the panel found support from the Castro Country Club.

When she came to San Francisco at age 19, finding a job "was very difficult." Instead, she turned to sex work to survive, which led to abuse and rape, she said. To deal with that trauma, Rivera "turned to crystal meth" to numb the pain of the trauma.

Now with five years clean following rehab, Rivera said that despite the many social service programs in the city, it is still difficult to find places where she can comfortably connect with other trans women.

An exception, she said, is the Castro Country Club, "where I have relied on what I wanted and needed: a community where I felt like I belonged. If not for the country club, I'd feel really alone and probably wouldn't have maintained my sobriety."

Finding affordable housing continues to be a problem, she said.

Reina Hernandez, a benefits manager for the PrEP program at SFAF, offered a different perspective on use of methamphetamines. Hernandez, who identifies as gender-nonconforming, said they continue to occasionally use meth recreationally.

Now 28, Hernandez said they have used meth for 16 years. "I got high last weekend," they said.

"I don't identify as a drug addict," Hernandez said. "I like to talk openly and publicly about my drug use but it is still so stigmatizing to admit you do drugs.

"I don't feel bad about my drug use, I go to work and I try to live a full and pleasurable life and part of that is doing meth once in a while," they added.

"That implies that if you're sober you don't have any mind-altering chemicals in your body," which is misleading if people smoke cigarettes or drink coffee, they said.

For Hernandez, people who want to continue to use drugs have difficulty finding role models who lead satisfying lives because "so many people just don't want to talk about their drug use," they said.

"People should know that there are possibilities" other than abstaining and that "non-problematic drug use" is possible for some people, Hernandez said.

Mandelman, who is co-chairing a new meth task force with gay Health Director Dr. Grant Colfax, attended the two and a half hour town hall and acknowledged that the city faces unprecedented problems with the meth epidemic. Mandelman said half the people receiving emergency psychiatric treatment in San Francisco have methamphetamine in their system.

"They should have a place where people can come down and get services outside of the hospital emergency departments. This is for their benefit as well as the benefit for people who need to be in the emergency room for medical issues," he said.

An earlier meth task force in 2005 "ended but the problem didn't go away," said Mandelman. "We needed further conversations, particularly in the queer community," to find solutions.

After three task force meetings and numerous focus groups, "I think we are going to come up with some good recommendations," he said.

The final meeting of the city's methamphetamine task force takes place Thursday, September 12, from 3 to 5 p.m. at City Hall. The task force, formed by Mayor London Breed at the request of Mandelman, will issue its final report in October. The report will contain recommendations on improving city policies and programs to help people seeking help with unhealthy use of drugs.