Guest Opinion: It's time for a conversation on meth use in the LGBTQ community 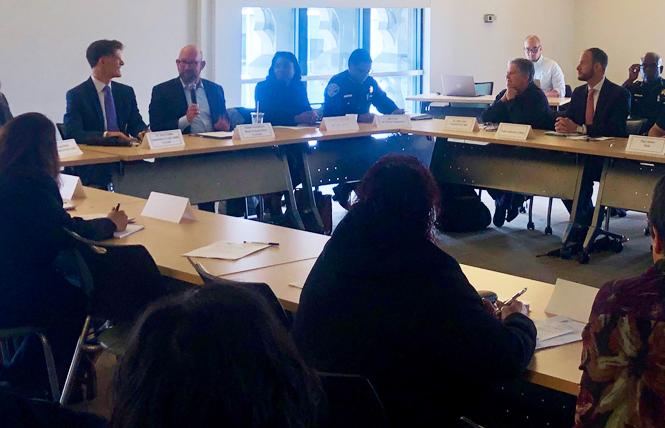 Recent headlines scream that "Meth is back" but we know that methamphetamine never left the LGBTQ community, at least not here in San Francisco. Meth's presence here hasn't changed. What has changed is the increase in the numbers of meth users in our community and the broader population who are in crisis because of our city's housing crisis and shortage of appropriate mental health and substance use disorder treatment services.

In order to solve this crisis, we need the LGBTQ community to come together to care for each other and inform solutions. That's why we, with the support of the Mayor's Methamphetamine Task Force, and in collaboration with other community partners, are convening a town hall to hear from members of the LGBTQ community, especially those with lived experience, on what the city should be doing to end the meth crisis.

Gay former District 8 supervisor Bevan Dufty and then-mayor Gavin Newsom convened the Mayor's Task Force on Crystal Methamphetamine in 2005. That task force met for four years and focused on the needs of the LGBTQ community. It recommended a number of solutions, including increased treatment, many of which were not put in place because of the significant public health budget cuts in 2009. The new task force is picking up that mantle and will make recommendations to the Board of Supervisors this fall on new programs, policies, and funding to better prevent and treat meth use in all communities.

Research has shown that LGBTQ individuals are more likely to use substances and more likely to develop problematic substance use, largely because of higher rates of trauma, than our heterosexual siblings. Gay and bi men, and other men who have sex with men, or MSM, have higher rates of crystal meth use and may face additional HIV transmission risks as a result. In San Francisco right now, it doesn't take much to lose one's housing stability and homeless individuals in San Francisco are disproportionately LGBTQ. Far too many of our community are living on the streets, where meth use can be a survival mechanism. Many of us have had a friend, partner, or family member who has struggled with meth use and felt helpless in the face of their disease.

San Francisco AIDS Foundation's Stonewall Project has found success in serving gay, bi, and trans men who use meth by providing low threshold harm reduction counseling and incentives for abstaining from meth use. PROP, the Positive Reinforcement Opportunity Project, served 126 participants in the last year. Of those, 63% stopped their use of stimulants completely and another 19% reduced their use. Because of the demand for additional services, San Francisco AIDS Foundation will soon expand its effective harm reduction programming, but this expansion will not be enough to deal with the severity of the situation in our city. Significantly more must be done, especially to serve trans women, youth, and monolingual Spanish speakers.

If we are to solve this crisis, we need elected officials, health care providers, people with lived experience, and other community members to come together to generate solutions. We invite you to come share your thoughts on how we can take better care of community members who want to change their meth use, protect those who are not yet at the point of changing their use from greater harm, have more open conversations about our substance use, and heal the traumas that leave many of us vulnerable to problematic drug use. We also want to hear what you think the City and County of San Francisco should be doing and funding — what do we need more of? What do we need less of?