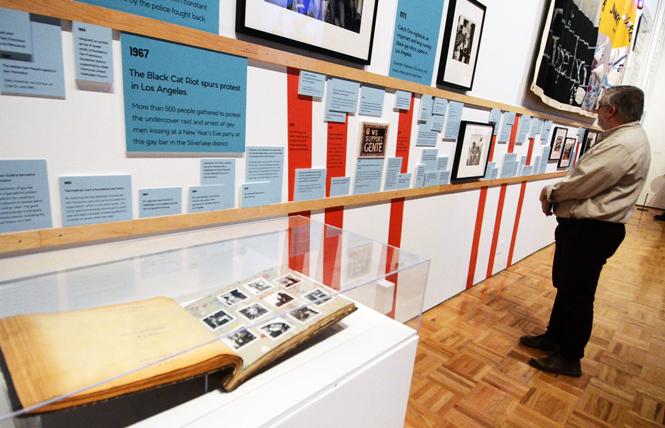 Arriving at the "Queer California: Untold Stories" exhibition at the Oakland Museum of California one recent weekday afternoon, the faint, familiar sound of Sylvester's "You Make Me Feel (Mighty Real)" could be heard coming from MOTHA, a mini-museum set up inside the larger exhibit. The Museum of Trans Hirstory and Art, as it's formally known, is a tribute to trans people and others who have challenged gender norms like Lou Sullivan, Jose Julio Sarria, Miss Major, and the aforementioned disco star.

Chris Vargas, 41, executive director of MOTHA and a trans man, was a collaborator on the "Queer California" exhibit and said at the media preview in April that he developed the online museum as a way to "create an inclusive canon" of trans and genderqueer history. In the physical MOTHA, he said that he used wallpaper in an attempt to bring in more stories. On the wallpaper are the names of bars like Aunt Charlie's Lounge and the now-shuttered Esta Noche in San Francisco, the Trans March, and organizations like St. James Infirmary, which provides services to sex workers.

There is a pair of stilettos worn by Miss Major, a longtime trans activist and former Bay Area resident.

He said there's a lot for visitors to take away from MOTHA.

"So many converging and diverging histories," he said. "There's lots of disagreement." 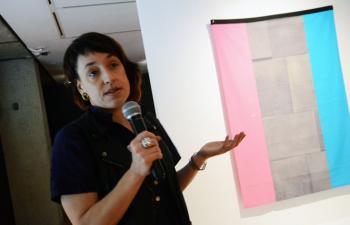 Artist Amanda Curreri talks about her flag creation during a media preview of "Queer California: Untold Stories" at the Oakland Museum of California. Photo: Rick Gerharter

The pop-up museum is just one part of "Queer California," which runs through August 11. And while there are some stories that are not as familiar to most LGBTs, others are, such as the rainbow flag that welcomes visitors to the Great Hall that is home to the exhibit. While it's a universal symbol of Pride, not everyone knows about its complicated history. The museum does a service by acknowledging in the wall text that the late Gilbert Baker co-created it with his friends Lynn Segerblom (then known as Faerie Argyle Rainbow) and James McNamara back in 1978. Baker died in 2017; McNamara died of AIDS in 1999. Segerblom, a straight woman, lives in southern California and for the past year and a half has tried to publicize her involvement with creating the first rainbow flags that flew in San Francisco during the 1978 Pride parade. (Those flags were different than the recognizable six-striped one that is on display at the museum, and with which most people are familiar.)

Opposite the rainbow flag is one that echoes the trans flag, except that the usual white stripe is gray. It was created by Amanda Curreri, 41, a queer artist and educator living in Cincinnati, Ohio. She told the Bay Area Reporter that she made it in 2013.

"It's different but shares with the trans flag," she said in an interview. "I often work with flags and symbols."

Curreri, who used to live in San Francisco, said she was especially proud to be in the exhibition and likes her flag's placement in proximity to the more famous one.

"It's a dream to be in conversation with the Pride flag. It complicates it, maybe," she said. "I want to engage tension, not antagonism."

Her flag, she explained, was hand-dyed (like many rainbow flags Baker and his friends made, and which Baker continued to make for special occasions until his passing).

"It's meant to be a little rough," Curreri said. 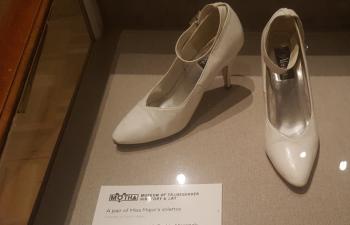 A pair of Miss Major's stilettos are part of the "Queer California: Untold Stories" exhibit at the Oakland Museum of California. Photo" Cynthia Laird

Long time coming
Lori Fogarty, OMCA director and CEO, told reporters at the preview that this year "seemed like the moment" to mount the exhibition.

"We've talked about doing an exhibit of LGBTs for a long time," she said. "We're lifting up these stories and celebrating these stories that are often untold: communities of color, women, and the trans community."

And, she said, all visitors will gain something from it.

"No matter their sexual orientation or gender identity, everyone can feel a sense of safety and belonging," Fogarty explained.

And learning. For example, there's a display of old articles about a California Gay Liberation Front chapter that wanted to start a community in tiny Alpine County in northern California about a year after Stonewall. The group was not able to win much support, and, after realizing the harsh winters in the area, abandoned the project after about a year.

Other gems are two photos of patrons at the Plush Pony, which was a working-class lesbian bar in Eastside Los Angeles (mid-1960s-2008). The bar was a gathering place for Mexican and Chicana women. The late photographer Laura Aguilar took beautiful portraits of some of the bar's patrons.

The exhibit includes southern California sites, like Balboa Park. A great film, "Wildness," is about the untold story of the Silver Platter bar in Los Angeles. Owned by straight men, they see it evolve into a trans Latina gathering space. (There are several films that screen on a rotating basis in a theater adjacent to the main exhibit.)

Curator Christina Linden, a lesbian, acknowledged that the exhibition is not a complete history of the LGBT community.

"This is a long time in the making," she told reporters at the preview. "We've chosen to focus on a constellation of stories that reframe the focus — that the future is queer."

She added that LGBT people "have had to create their own kinship."

And she talked about how a lot of queer history, especially around sexuality, is censored. Sexually explicit material in the exhibition is marked with a symbol.

There are over 70 collaborators who made up "Queer California." There are interactive elements and audio-visual features that make moments from the past come alive.

The back wall of the exhibit is a timeline. It includes various historic markers from the 1960s and 1970s: the Compton's Cafeteria riots in San Francisco, the Black Cat riot in L.A., the Stonewall riots in New York City, the first Gay-in in San Francisco and the first Pride parade in L.A., and the first gay rally in San Jose. In short, it's clear that the Bay Area has a rich queer history.

"With transgender and LGBTQ+ rights increasingly in the news, the exhibition will be a timely opportunity to shine light on the history of California as a major site of LGBTQ+ community, culture, and politics," a news release stated.

Visitors who spoke with the B.A.R. last week said they enjoyed the exhibit.

"It's super incredible to have such a collective of really rich history," said Anna Frontero, 32, who identifies as queer and was visiting from Massachusetts. She was checking out one of the interactive features, which she enjoyed.

Jeff Boverman, 72, was visiting with his wife. The couple, who live in Long Beach, came up to see "Queer California" and another exhibit at the museum.

He said that his community is very LGBT-friendly and he knows much of the queer community's history.

"This is people being people," he said. "It's quite an interesting exhibit."