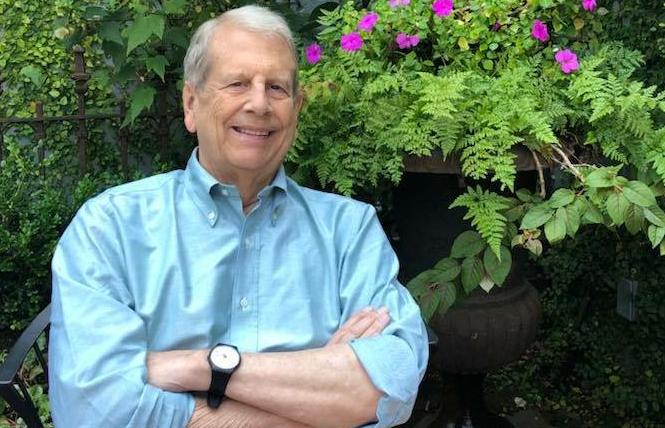 Civic Center has a checkered reputation to match its history but James Haas, author of the new book, "The San Francisco Civic Center: A History of the Design, Controversies, and Realization of a City Beautiful Masterpiece," wants everyone to know how unique and important it is.

"This beautiful city built a place that was the heart of functions," he said. "There's not much understanding of what this was about."

Haas, a gay man and lawyer by trade, has been an advocate for the planning, reconstruction, and use of the Civic Center since 1984, when he was asked to do so by the women's group the Friends of the Library, which was organizing for a new main library. (The Friends group now welcomes all.) At the time, he noted, Dianne Feinstein was mayor, and she was not particularly interested in approving a $100 million bond simply because a special interest group was asking.

"I suggested in a letter I wrote to her," Haas, 72, said in an interview at his Civic Center apartment, "that she not think of what needs to be done just in terms of the library but in terms of all of Civic Center."

Feinstein, now California's senior U.S. senator, wrote the foreword for the book. She recalled Haas' involvement in a statement to the Bay Area Reporter.

"When I was mayor, Jim championed the renovation of San Francisco's historic Civic Center, including building a new main library and renovating the old library into a new Asian Art Museum, a plan I supported and was approved shortly after I left office," Feinstein wrote. "I had my staff work with city departments on a plan that ultimately resulted in a new courthouse, new public library, repurposed old main library and other public improvements like park beautification and new playgrounds. Jim had great foresight and I was always happy to work with him."

The buildings around the center had been neglected, and most of the area was not in great shape. After Feinstein's staff did a comprehensive study of the cost and condition of the plaza, she agreed to the bond to build a new library, as well as several other buildings. With the plans, a building would be constructed for the new library and the old library would be turned into the Asian Art Museum. The Pioneer monument had to be moved as well, and historical preservationists had to be convinced that this was all necessary. (Part of the Pioneer monument, the "Early Days" statue, was removed by the city last fall due to its racist depiction of Native Americans.)

"Their two big issues were with the monument and the old library becoming the Asian Art Museum," Haas said of preservationists.

One of the main points of contention was that the Asian Art Museum entailed removal of the site-wedded landscape murals by Bay Area tonalist painter Gottardo Piazzoni (1872-1945). They finally found a suitable home within the new de Young Museum, San Francisco Chronicle critic Kenneth Baker wrote in a 2013 article when the museum's new home turned 10.

Former mayor Art Agnos was also a supporter of the new library before he was elected, Haas said.

"I was eager to get Mayor Feinstein to complete her report endorsing the new library bonds before she left office to ensure that there was no serious opposition," Haas said. "It took nearly two years to get the bond issue on the ballot. When it was and we organized the campaign, Art was a great supporter and his wife, Sherri, was the honorary chair of the campaign. It passed with 76.2 percent of the vote."

Agnos did not respond to a message seeking comment.

Then-state Senator Quentin Kopp was opposed to the bond.

Kopp told the B.A.R. in a phone interview Tuesday that he's "satisfied with how it worked out" but thought "the initial bond proposal, which I opposed, was an unnecessary expenditure of taxpayer money."

From the window in his 19th floor apartment, Haas has a view of City Hall, the courthouse, and most of Civic Center. This high up, the roofs of all the buildings stand out, and he pointed out the unique quality of the architecture.

"We went through this period of modernism after the war," he explained, referring to the French baroque style of the courthouse and the grandiose City Hall. "A lot of this design was mocked as being foreign."

Haas appreciates the distinct and distinguished nature of these buildings, City Hall in particular.

"Most city halls don't have the dome like that. You see those on state capitols," he said.

With his appreciation for what Civic Center should be, not to mention his daily view, it's not surprising that he wrote a book exploring the story and function of this place.

The book is a historical narrative of the Civic Center starting with the early city planning of a San Francisco people today wouldn't recognize. It tells the story of a growing metropolis through the perspective of one singular spot within its borders.

The final chapter, entitled "Recent Decades and the Present Day," is where Haas' own involvement comes into play.

Haas is cautiously optimistic about the future of Civic Center. He's seen it go from "wind-swept and empty and nobody used it" to the current iteration, which is not without its troubles. The new playgrounds and cafe have brought more people to the area; improvements are being made but there's still a ways to go.

"Make this a living, acting space," Haas said, gesturing out the window to the expanse of city below him. He talked about the remodeling of old office buildings into apartments around Civic Center, excited about the fact that the neighborhood is becoming "24 hours" with more residents and activity.