Grenell one of Trump's picks for US ambassador to the UN 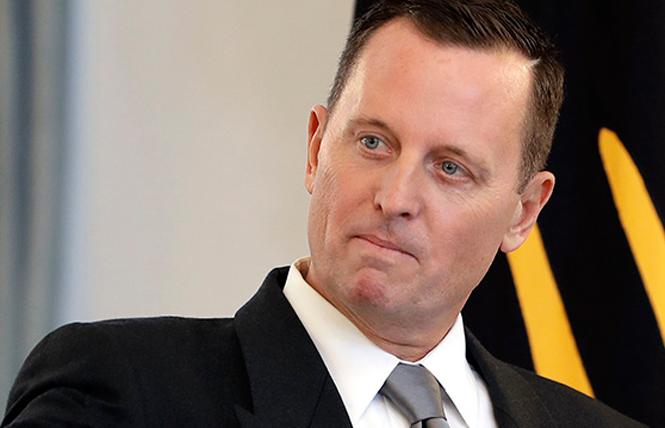 The White House this week released four potential nominees, including gay Ambassador to Germany Richard Grenell, for the vacant position of U.S. ambassador to the United Nations following the abrupt withdrawal of Heather Nauert.

Nauert, who was nominated by President Donald Trump in December 2018, following former U.N. Ambassador Nikki Haley's resignation, dropped out of the running last weekend due to her employing a nanny who was in the U.S. legally but didn't have authorization to work.

Critics took aim at the current State Department spokeswoman and former "Fox & Friends" host when she was nominated U.S. ambassador to the U.N., citing her diplomatic inexperience.

Nauert, who has been with the State Department since 2017, publicly condemned the LGBT Chechen crackdown and has promoted Spirit Day, a campaign to combat bullying, reported the Washington Blade.

On Friday, Politico reported that Trump will nominate Craft for the position.

"Kelly has done an outstanding job representing our Nation and I have no doubt that, under her leadership, our Country will be represented at the highest level," Trump wrote on Twitter.

Ivanka Trump, the president's eldest daughter, is also potentially in the running if no other candidate emerges as a fit for the position, reported the political newspaper.

UNHRC pressures Russia on Chechen LGBT purge
Russia "must act urgently" to protect the rights of LGBT people or individuals perceived to be gay in Chechnya, experts at the United Nations Human Rights Council wrote in a letter to the government of the Russian Federation, according to a February 13 statement.

The U.N. sent a similar letter to Russian officials in April 2017 following initial reports of the arrest, detainment, and torture of 100 suspected gay and bisexual men. At the time, up to three men were murdered.

"We are alarmed by information pointing to a new wave of persecution based on sexual orientation," the experts said in a release from the UNHRC. "Abuse inflicted on victims has allegedly become more cruel and violent compared with reports from 2017. It is no longer only gay men in Chechnya who are being targeted but women also."

The Russian LGBT Network sounded the alarm in a January 14 news release, reporting an estimated 40 suspected LGBT people — men and women — had been arrested and detained in the Chechen cities of Argun and Grozny in December 2018. Two people had died, reported the Russian LGBT organization.

The organization has monitored and worked on Chechnya's gay purge since April 2017 when independent Russian newspaper Novaya Gazeta broke the news.

The newspaper also reported on the mass executions of alleged LGBT people in Grozny, the capital city of Chechnya that occurred in January 2017. The paper published a list of missing people presumed to be dead.

The number of people who were caught up in the LGBT crackdown grew. The LGBT network reported last July that 200 individuals suspected of being LGBT were detained and at least 20 were killed.

Since then, the LGBT organization has helped 130 LGBT Chechens escape from the autonomous Russian state in the Northern Caucasus.

The network's program director, Igor Kochetkov, told the Associated Press that the "persecution of men and women suspected of being gay never stopped." Responding to reports that Chechnya's gay purge has resumed, he said, "It's only that its scale has been changing."

Unlike 2017, LGBT Chechens, especially those who are detained, are finding it harder to leave the region. Authorities are reportedly now trying to prevent victims from fleeing the region or filing complaints. To accomplish this, officials are reportedly destroying or confiscating their identification documents, threatening them or those close to them with criminal proceedings, and forcing them to provide signatures on blank forms that have not yet been filled in, according to the release.

In December 2018, the Organization for Security and Cooperation in Europe released a damning report based on an independent investigation into Chechnya's LGBT crackdown. The experts confirmed gay Chechens' survival accounts and other LGBT advocates and human rights organizations' reports, corroborating "overwhelming evidence of grave violations of human rights abuses and crimes against LGBT Chechens" and tactics to suppress victims from speaking out.

Alvi Karimov, spokesman for Chechnya's leader Ramzan Kadyrov, attacked the U.N., United States, and other leaders, telling RIA Novosti that it was an "informational gay attack" directed against Russia.

"They quote each other without having any objective and reliable fact," said Karimov, adding, "the informational gay attack is a serious and well-planned part of an economic, political, psychological and informational attack directed against Russia."

He relayed Russia's official message denying the LGBT crackdown in Chechnya and the existence of LGBT people in Chechnya.

"There is not a single case of arrest on these grounds in Chechnya," Karimov said, according to Crime Russia.

Ty Cobb, global director of the Human Rights Campaign, told LGBTQ Nation that the Washington, D.C.-based LGBT rights organization has "repeatedly called on the Trump-Pence White House to speak out and help bring an end to this persecution. Instead, the White House has largely ignored the actions of the Russian-backed regime in Chechnya."

Trump has remained silent on the issue.

Pauline Ngarmpring, 52, transitioned three years ago. She is one of three party nominations for the country's top leadership position.

Thai voters will go to the polls March 24.

Ngarmpring, a former CEO and sports promoter who is well known in the world of Thai soccer, doesn't expect to win. Her goal is to bring hope and inspiration to Thailand's LGBT community and raise awareness about the community, reported Voice of America.

Among the marginalized communities she is advocating for are vulnerable communities, such as sex workers, who work in the "twilight zone," she said as she campaigned in one of Bangkok's more infamous nightlife areas, reported the media outlet.

Currently, lawmakers are considering a policy to legalize prostitution.

At the moment, the party is contesting about 200 seats in the 500-member House of Representatives. There are about 20 openly LGBT candidates in the House. Ngarmpring joined only in November 2018.

She's now a trailblazer as the party's second-ranked nominee for prime minister.

Even if she doesn't win, she wants her nomination to bring hope to the marginalized and to open up political space for future generations of LGBT people.

"We are not saying we are better than male or female," she said. "We just want to say we are equal."

The couples' suits claim that the Japanese government doesn't have a de facto ban on marriage, but the country's Article 24 doesn't recognize same-sex marriage.

The bill reads, "Marriage shall be based only on the mutual consent of both sexes and it shall be maintained through mutual cooperation with the equal rights of husband and wife as a basis."

Like many countries' constitutions, Japan's document includes an equality clause.

The couples' claim Japan's denial of same-sex marriage is contrary to the country's constitutional obligation.

Having a national marriage equality law in place will provide many legal protections for same-sex couples.

That's why Ken Kozumi and Kenji Aiba are one of the couples petitioning the courts to recognize their unions.

Kozumi noted that the couple is in "good health and able to work," but he told Time that he is worried if something happened to either one of them, such as an accident or illness.

The lawsuits are tackling different angles of same-sex marriage.

One couple, Ai Nakajima, 40, and her German-born partner, Tina Baumann, 31, married in Germany when same-sex marriage became legal there in 2017. They are seeking to have their overseas marriage legally recognized in Japan. Their attempts to have their marriage recognized has been denied several times in Yokohama, where they currently live.

The tactic has been successful in other countries helping to pave the way to same-sex marriage.

The couples hope to take their cases as far as Japan's Supreme Court. They estimate the fight will take five years and are ready for the long battle ahead.

However, Prime Minister Shinzo Abe has taken a more conservative approach on LGBT rights in the Japanese government, reported Care2.org.

Got international LGBT news tips? Call or send them to Heather Cassell at Skype: heather.cassell or oitwnews@gmail.com.

Updated, 2/22/19: This article has been updated to include Trump's nominee for U.N. ambassador.