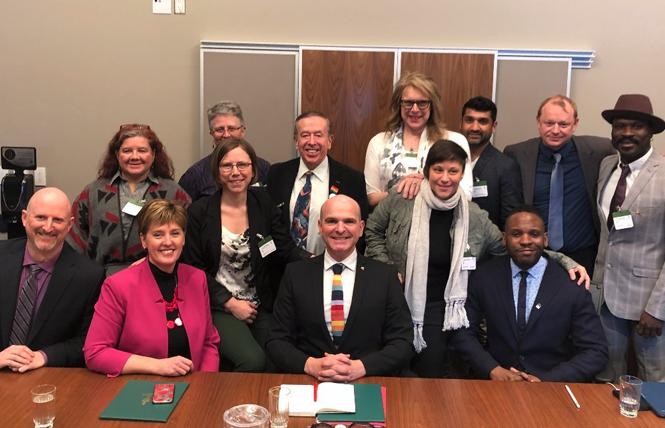 Canada's government has pledged $30 million to improve LGBT lives in developing countries over the next five years.

The announcement, made February 7, includes annual payments of $10 million after that.

Boissonnault is also the Member of Parliament for Edmonton Centre.

Homosexuality is criminalized in more than 70 countries around the world. In eight countries, LGBT people can be subjected to the death penalty.

Response to injustices against LGBT people around the world has increased, but funding the work hasn't kept pace. Currently, there are 1,516 organizations from 152 countries registered with the International Lesbian, Gay, Bisexual, Trans and Intersex Association, a news release announcing the Canadian effort stated.

"This announcement is welcome, necessary, and overdue," said Doug Kerr, the leader of Dignity Network, in a release from the organization following the Canadian government's announcement last Thursday. "This is an important step forward demonstrating Canadian engagement on supporting the human rights of LGBTQI people globally. This funding will strengthen both Canadian civil society's ability to support our partners around the world as well as directly support human rights defenders globally working to make change.

"At the same time, while the global LGBTQI movement has grown, funding to support this work has faced considerable obstacles," continued Kerr, noting that the organization started calling upon Canada's government officials in 2015. "That has made it increasingly difficult for human rights defenders and activists to do their important work."

According to the Global Philanthropy Project, foundations, corporations, governments, and multilateral agencies contributed roughly $126 million to LGBTQI issues in the global South and East during the two-year period of 2015 to 2016 — a decrease of over $2 million from previous years. In the case of governments, this represents less than four cents for every $100 of international aid and assistance, according to the release.

Kerr praised Canadian officials' increased commitment over the past four years and credited the appointment of Boissonnault as the country's LGBTQ2 expert.

Kimahli Powell, executive director of the Rainbow Railroad, also applauded the funding allocation. The Rainbow Railroad is a Toronto-based international LGBT organization that helps queer people find safe havens from state-enabled violence, persecution, and the threat of death in countries where homosexuality is criminalized.

"This funding commitment will build the capacity of our partners and networks so they can do their human rights work better — helping LGBTQI people faced with persecution around the world," said Powell in the release.

Kerr said that it will be up to Canadian global LGBT advocacy groups to continue to work with Canada's government to advocate the types of grass-roots groups and organizations the money will fund.

HRW claims that Lebanese security forces have undermined the rights of sexual and gender minorities. Human rights advocates recently attempted to meet with the country's General Security officials but have been unsuccessful, according to a February 11 news release from the organization.

The rights group complained that General Security, the intelligence branch of Lebanese security forces that oversees foreigners' admission to the country, attempted to shut down an annual four-day conference of the Arab Foundation for Freedoms and Equality on September 29, 2018.

Additionally, General Security officers took details of all conference participants, which included people of diverse sexual orientations and gender identities, from the host hotel registry. Some of the participants were from hot-button countries, such as Egypt and Iraq, where LGBT people have faced severe persecution.

In 2018, Egyptian police arrested more than 70 people for being gay or transgender. In Iraq, armed groups have murdered LGBT people with impunity, according to HRW.

The Arab Foundation for Freedoms and Equality works to advance LGBT and other human rights.

The General Security's interference followed public statements from the Muslim Scholars Association accusing the organizers of promoting homosexuality and drug abuse. The association called for organizers' arrest and the cancellation of the conference on the grounds of "incitement to immorality," according to the release.

HRW urged U.N. officials to pressure Lebanon's government to hold its security forces accountable for the violations according to international law and to not use vague "morality" claims to undermine the rights of sexual and gender minorities.
The Muslim Scholars Association also filed a legal complaint against the Arab Foundation's HIV prevention program, saying it promotes debauchery. The organization's director, Georges Azzi, was taken in by internal security forces for questioning in December.

In May, internal security forces detained an activist and pressured him to cancel events associated with Beirut Pride, HRW stated.

"Bans on these events not only discriminate against gender and sexual minorities and their advocates, but they also undermine everyone's rights to freedom of assembly, association, and expression in Lebanon," said Lama Fakih, deputy Middle East and North Africa director for HRW. "Lebanon can't shy away from its obligations not to discriminate and to protect these basic rights by pointing to poorly defined morality standards."

Bangladeshi trans women run for Parliament
Transgender women political candidates are vying to win some of the 50 seats reserved for women in Bangladesh's National Parliament in the upcoming elections.

The election schedule will be announced February 17.

So far, eight transgender women have announced their candidacy for the Jatiya Sansad, the country's Parliament, as members of the ruling party, the Awami League Party.

It's the only political party that allows transgender women to run for office.

The Awami League Party is an alliance of 14 parties that won a landslide victory in the 2018 December elections. The party has 43 of the 50 seats reserved for women open.

There are 350 seats total in the South Asian country's Parliament. The country's constitution reserves seats for women.

Election Commission Secretary Helaluddin Ahmen said that any eligible woman, including hijras, the term used to identify transgender women, can qualify for the reserved seats.

Some of the candidates told Global Voices that they were running to represent the transgender community because they've never been represented in Parliament before.

Since then, the Bangladesh government has made some strides toward improving the quality of life for the country's transgender community, such as creating access to employment opportunities and appointing the first-ever transgender woman, Tanisha Yeasmin Chaity, to the National Human Rights Commission in July 2018.

Got international LGBT news tips? Call or send them to Heather Cassell at Skype: heather.cassell or oitwnews@gmail.com.