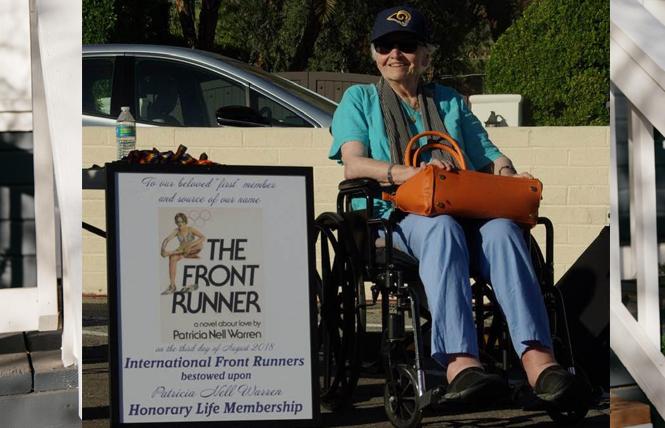 Patricia Nell Warren was inducted as a lifetime member of the International Front Runners last October.

Bestselling novelist, social activist, and longtime LGBT sports advocate Patricia Nell Warren died Saturday, February 9, at the age of 82. A cause of death was not immediately reported, but Ms. Warren had been battling various health issues for several years.

Ms. Warren burst into international fame with her second novel, the best-seller "The Front Runner," in 1974, the same year she came out as lesbian.

"The Front Runner," about a closeted coach mentoring a young gay male track athlete in the Summer Olympics, was the first modern gay novel to crack the New York Times best-seller list. For many LGBT individuals at the time, it was the first non-pornographic depiction of gay life that they had ever read.

Frontrunner and Front Runner LGBT running clubs all over the world are named in honor of Ms. Warren's seminal novel. Last October at the Pride Run in Palm Springs, she was inducted into International Front Runners as its first lifetime member.

"Initially, I had not heard of the book until I read the SF Front Runner website," Reggie Snowden, sports officer of the Federation of Gay Games, said. "Eventually, I read the book and related to the novel. Being an out, proud runner, 'The Front Runner' spoke volumes with my struggles earlier on in life with coming to terms with accepting my sexuality. We will miss Patricia Nell Warren, but she will not be forgotten."

Ms. Warren was born in Montana on June 15, 1936. She married Ukrainian poet Yuriy Tarnawsky and wrote Ukrainian poetry. She worked for Reader's Digest for more than two decades.

In the late 1960s, Ms. Warren had been one of the first women to coach the Boston Marathon, which barred women competitors at the time. Later, she and others succeeded in getting the women's marathon added to the Olympics. She was active in the fight against the military's "Don't Ask, Don't Tell" policy, served as an education commissioner for the Los Angeles Unified School District, and made an unsuccessful run for the West Hollywood City Council in 2007.

Ms. Warren had long expressed interest in having "The Front Runner" turned into a full-length motion picture. Film rights were sold to Paul Newman in 1975 and later passed through multiple hands through options and buyouts. Currently, her estate holds the film rights.