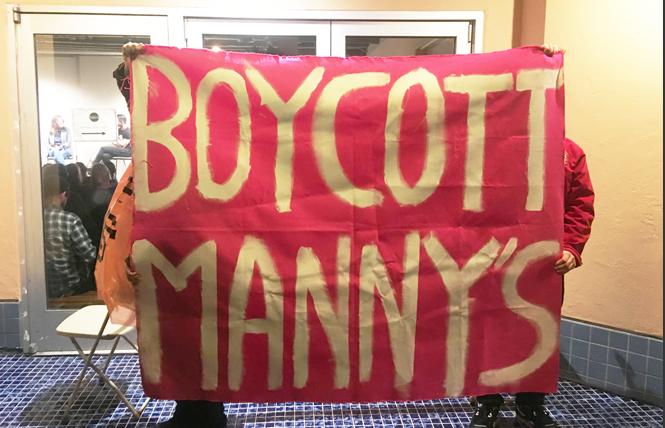 Protesters with the #BoycottMannys coalition braved a historic storm on January 16 to maintain a picket of Manny's in the Mission. Photo: Christina A. DiEdoardo

To its defenders, Manny's — a cafe, bookstore, and self-described "civic social gathering space" (whatever that means) — is the best thing to hit the Mission since Hillary Clinton. To its detractors, it's a gentrifying business that hides behind a cloak of faux-progressive politics.

"We found out about Manny's Zionist politics after he first came to our attention as a forthcoming gentrifier savant," said a spokesperson for the Lucy Parsons Project, one of the groups maintaining the pickets every Wednesday in front of the cafe. "The particular nature of Manny's vision for the space prior to opening seemed scandalous to us, even, and especially, compared to any other run-of-the mill boutique gentrification shop or cafe you might see on Valencia.

"In a city where access to public space and the sort of civic life that space offers is rapidly disappearing, to claim this privatized wine bar is the new frontier of in-person political discourse seemed particularly tone-deaf," said the spokesperson, who asked to remain anonymous.

Named for one of the most significant anarchists of color of the 19th and early 20th century, the LPP is a radical black queer direct action group. Other groups supporting the picket include Gay Shame, Queers Undermining Israeli Terrorism, the Brown Berets, and Black and Brown for Justice, Peace, and Equality. They want the cafe to close and be replaced by a business they see as more appropriate for the area.

On the other side is cafe founder Manny Yekutiel, a gay Jewish man. Yekutiel was asked for comment, and responded that he did not get the message in time. He was given more time but did not respond. He enjoys the backing of gay state Senator Scott Wiener (D-San Francisco), who called him "a friend" in a recent tweet declaring Wiener's support for the cafe.

That's helped Yekutiel draw a flurry of coverage from the San Francisco Chronicle (including an opinion piece on the cafe and the protests that ran on New Year's Day) to the Times of Israel.

With a few exceptions, most of the writing about it has echoed the claims of Yekutiel and his defenders dismissing the protesters' concerns about the gentrifying effect of the cafe and accusing them of anti-Semitism in the bargain.

According to Yekutiel's op-ed, "As a liberal American Jew, I have complicated feelings about Israel. I do not support everything that its government does (nor everything our American government does) ... [t]his complex issue is a perfect example of the need for high-quality discourse."

He also wrote about the cafe: "The kitchen is staffed with formerly homeless individuals and run by the nonprofit Farming Hope. We've already given free or low-cost space to more than 25 nonprofits such as Mission Graduates, Indivisible, Citizen's Climate Lobby, and the Instituto Familiar de la Raza, who need to spend their money on programs, not expensive rental fees. Our coffee is $1.75 and you can have a healthy square meal for $6."

He then went on to castigate the picketers as the "alt-left," a term that's seen as a slur by antifascist activists, particularly since it's believed to have first been coined by World Net Daily, a website that promotes right-wing conspiracy theories, before being adopted by Fox News and other collaborators of the current regime in Washington.

At the January 16 picket I attended, two individuals came out of the cafe and kept trying to engage demonstrators in conversation about "why they were protesting." Since none of these folks were interested in reading the handout explaining the protest that organizers tried to give them, their motivation to disrupt the picket seemed crystal clear.

Even so — and despite gale-force winds and the strongest storm to hit San Francisco in more than a decade, the picket was vocal and loud — so much so that toward the end, one Manny's employee became so unglued that he came out and laid hands on a protester who was filming him, all the while screaming "It's illegal to photograph me! This is a violation!" or words to that effect.

In truth, it isn't. But grabbing somebody's body or phone counts as a battery, which is illegal.

When worlds collide
Beyond its local importance, the conflict at Manny's is a microcosm for the wider struggle underway for the soul of the left both in San Francisco and elsewhere. Yekutiel's stated raison d'être for the cafe was to create a space for public discourse on political issues. That's a comfortable place for most centrists and indeed, many leftists, because it's easy to conflate discourse with action. Furthermore, discourse allows people to paper over differences in the name of "agreeing to disagree," especially if doing so allows the projection of "unity," which many Democrats prize above all other objectives.

Anarchist groups that believe in direct action tend to have a different view. To them, the issue on the table needs to be dealt with promptly and they place a higher priority on action than discussion for its own sake. While they often work internally on a consensus model and in coalition with other groups, the avoidance of external conflict is seen as less important than obtaining results. That's why antifa doesn't lose sleep when centrists scream that we're "worse than the Nazis" and why, I wager, the groups that are part of the #BoycottMannys picket feel similarly about the insults tossed their way.

The struggle is over two important issues. Regarding gentrification, people of color are more likely to be economically marginalized by the continued transformation of former working-class neighborhoods like the Mission than white people or those with white passing privilege. As to the second point, those who cannot understand why American blacks and people of color would express solidarity with Palestine need to remember that, through Urban Shield and other conferences, Israeli officials and contractors have contributed to the militarization of American police forces and encouraged them to see civilians as potential hostile targets, rather than members of the public who pay their salaries. In the Bay Area and elsewhere, it's usually people of color who have borne the brunt of the (often deadly) consequences of that shift in thinking.

Similarly, it's not accidental that during the #Occupy period one of the better sources for countermeasures to tear gas and pepper spray were the members of the Palestinian resistance, since they had been dealing with these threats for years — and they made their knowledge known through Twitter and elsewhere.

More recently, there has been a concerted effort by those who support the Israeli government's policies toward the Palestinians to claim that any criticism of Israel's actions is, ipso facto, anti-Semitism. That leads to ugly situations like the one earlier this month, where Zionist activists forced the Birmingham Civil Rights Institute to withdraw an award it had promised to former Black Panther Angela Davis because of Davis's support of the Boycott, Divest and Sanctions movement, which encourages companies and individuals to boycott and divest from Israel as a means to pressuring the government to change its policies toward the Palestinians. While it's gotten less attention than the Manny's boycott, on January 9, a Times of Israel regular blogger publicly accused several Jews of color, some of whom were black, of engaging in "Jewface" as a "tactic," primarily because they opposed Israeli policies.

Most of the patrons of Manny's who sat inside, warm and toasty on that rainy Wednesday night, were probably ignorant of all this history. The protesters who staffed the picket line as the gale bore down on them certainly weren't. That's why they intend to keep the picket going for as long as it takes.

Got a tip? Email me at christina@diedoardolaw.com.