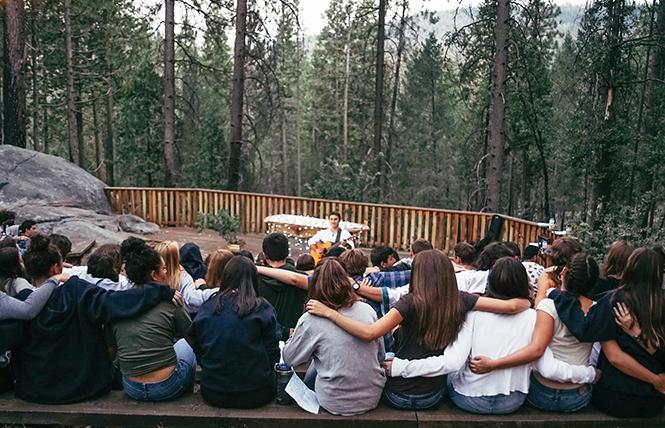 Camp Tawonga participants gather around the campfire in camaraderie and song in 2018. Photo: Courtesy Camp Tawonga

"I feel, like, awesome about it," said Jonathan, a 10-year-old transgender and nonbinary camper who uses she/he/they pronouns. "I can't wait to go."

Sabrina said she gets excited about camp.

"It's a cool experience," she said.

Camp Tawonga, a Jewish summer camp located near Yosemite National Park, has been a safe haven for Jonathan, who was bullied at their former school. Next summer will be extra special because, for the first time, the camp is officially testing two all-gender cabins.

Jonathan can't wait to rock climb, paddle board and kayak on the lake, see the camp's unofficial cat, Outlaw, and, of course, enjoy the new all-gender cabins created to welcome nonbinary campers.

At the request of campers, and with overwhelming approval of families, the camp is designating two all-gender cabins this summer.

The cabins will operate July 28 through August 13, one for fifth and sixth graders and one for seventh and eighth graders. There will be a strict no nudity policy in the all-gender cabins. Campers will have the option to change in the bathroom or in changing rooms, similar to dressing rooms in clothing stores.

Meyer said that Camp Tawonga is open to anyone.

"Tawonga's mission is to foster positive self-esteem, create cooperative community, foster connections with nature, and develop spirituality and positive Jewish identity. Our campers include those with both Jewish and non-Jewish backgrounds, as well as many interfaith families," she wrote in an email.

Meyer, a 41-year-old ally, has worked at the camp for 11 years. First as associate director, for the last three years she has run the more than 90-year-old camp that sits on 160 acres in the Stanislaus National Forest.

The camp operates on a budget of nearly $5.5 million and serves an estimated 1,300 families plus an additional 1,500 campers, she said.

"It feels like a really important step to allow all children, regardless of their gender, to be able to be their best selves at Tawonga and be a part of our community," said Meyer.

Nancy Brunn, the twins' single lesbian mother, said she felt the action taken by the young people sent a message.

"Kids changing the name of the cabin was really a powerful statement of belonging in the world," she said.

She also credited the camp's leadership for taking the steps to embrace gender-nonconforming kids by creating a positive and safe environment and experience for them.

"It's really terrific. I think that it's Tawonga taking the next step in being a really welcoming camp," said Brunn, who first took her family to the Keshet LGBTQ Family Camp before sending her kids off to Camp Tawonga.

To her, the all-gender cabins signal one more step in the camp's tradition of welcoming all kids and families.

"Tawonga has been pioneering, creating inclusive camp environments, and I see this as the next step in that," Brunn said. "It's so visible and explicit that really all kids [and] all genders are welcome at camp."

Rates for the various camp options range from $1,415 for six days to $4,465 for three weeks, according to the Camp Tawonga website. Financial assistance is available.

For nonbinary campers, Brunn believes, "it feels really good to have their gender affirmed by offering a housing option that is designed to accommodate them."

Meyer said requests for such a change had been building.

"Over the last few years there has been more and more demand from our families to offer something like this as more and more campers have identified as nonbinary in their gender identity and/or are gender fluid," said Meyer. "More kids are breaking out of the boxes."

"Our desire is to serve the whole Bay Area Jewish community and make sure that people of all genders feel seen, supported, and welcome at Tawonga," said Meyer.

The all-gender cabins are not only embracing what is already organically happening at Camp Tawonga, but are an evolution from the camp's policy to place "children in the cabins according to their preferred gender identity" as they are following what they see as an increase in nonbinary campers and their friends who want to bunk with them.

Camp Tawonga families have been overwhelmingly supportive of the move.

"We've received nothing but positive responses from the community," said Meyer, who noted that for the kids, it's not such a big deal as the adults are making it out to be.

"A board member told me that his children were like kind of, 'Oh, OK,' like it was no big deal to them," said Meyer. "I think that for the older generation it feels more radical."

To verify what they were witnessing anecdotally, the camp conducted a survey of its 1,300 families and spoke to a select group of parents about the possibility of creating the all-gender cabins this past spring. Over 13 percent of respondents "said that they wanted us to offer this," said Meyer.

Additionally, Meyer reached out to experts at Gender Illumination, Gender Spectrum, and Keshet, which all encouraged the camp to take the leap.

"They all thought that this was an excellent idea and something that we should try," she said.

Ariel Vegosen, founder and director of Gender Illumination, is glad that Camp Tawonga took the initiative.

"I think that it's phenomenal and really great," the 38-year-old queer nonbinary individual who uses all pronouns, told the Bay Area Reporter.

Vegosen began working with Camp Tawonga in April with a gender inclusivity training for staff and then began consulting with them about the all-gender cabins.

"It ensures not only that campers who identify as nonbinary and genderqueer have a place to be and a place to live, which is fundamental at camp life, it also ensures that all campers of all genders" have the space for freedom to have a new experience, said Vegosen.

"It's really meeting the needs of the campers and families and the needs of where we are at today in society," Vegosen added.

If it's a success, the camp plans to expand the program.

"I'm hoping we can better serve the campers who we are already serving and help more people feel welcome and invited to participate in Camp Tawonga and be a part of our community," said Meyer.

Pioneer
For the past 20 years, Camp Tawonga has successfully hosted Keshet's LGBTQ Family Camp (https://tawonga.org/programs/year-round/weekend-family-camps/), what Meyer believes was the first of its kind and has since been replicated at other camps, she said.

"I feel so proud of Tawonga," said Deborah Newbrun, who served as camp director at Tawonga for 25 years and launched the LGBT camp 21 years ago.

Newbrun, a 59-year-old lesbian, never fully left Camp Tawonga. She still works part-time at the camp serving as a senior Jewish facilitator and director emeritus. She also continues to co-lead the Keshet camp with Jamie Simon, the camp's executive director.

Her gender-nonconforming stepchild, who is a senior at Stanford University, is also a camp staffer, she said. They've led the staff all-gender campfires and cabins for the past two to three years.

Newbrun is proud of Camp Tawonga for its work on nonbinary people and Jews of color.

She and Brunn said that the all-gender cabins are an evolution of the queer family camp. Newbrun said that she's also noticed straight families with nonbinary children also starting to attend the Keshet camp.

"This work that Tawonga is [doing is] very cutting edge particularly with the gender and right now," she said, noting that other Jewish camps have also implemented progressive gender variant programs. "That's what they are advancing most quickly because I think that's what we know the best."

Camp registration is now open. To sign up for LGBT Family Week or send kids to camp, visit https://tawonga.org.

Updated, 12/20/18: This article was updated to state that two cabins would be designated all-gender and that 13 percent of respondents said they wanted the camp to offer this.