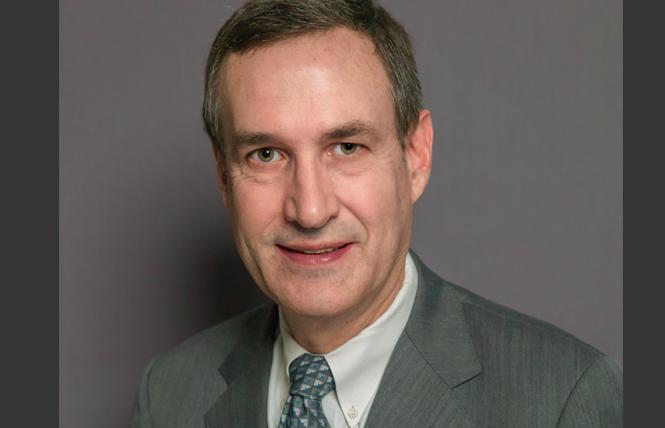 Judge Jonathan Karesh is set to become the second LGBT judge to preside over the San Mateo County Superior Court when he begins a two-year term in the leadership position in January.

It is believed that, come 2019, Karesh will be the only LGBT presiding judge of a county court system in California. And he will be one of only a few nationwide; a map of LGBT judicial officials compiled by the LGBTQ Victory Fund lists only two out presiding judges at the moment.

"It really is an honor to get this position and to know my colleagues have the confidence in me to do it," Karesh, 58, told the Bay Area Reporter in a phone interview this week. "We are a small court of just 27 judges, so we know each other very well."

It is believed that the first LGBT presiding judge in California was now retired lesbian Judge Rosemary Pfeiffer, who oversaw the San Mateo County Superior Court in 2000. She stepped down from the bench in 2012.

According to the recently formed California LGBT Bench Officers Group, the only other known out presiding judge was now retired lesbian San Francisco Superior Court Judge Donna Hitchins. She served in the role at the start of 2002; Hitchens left the bench in 2011.

"But there may have been others we just don't know about because they were unable to be open. Judge Karesh's visibility and leadership will help change that history," wrote co-chairs of the group Judge Joshua Wayser, who is gay, and Justice Therese Stewart, a lesbian on the state's appellate bench, in an emailed response. "We are thrilled that Judge Karesh and our other members can continue to contribute to the richness of our diverse California bench."

Karesh is following in the footsteps of his father, Joseph Karesh, who was elected to the San Francisco Superior Court in 1960 — the year Jonathan was born — and became presiding judge of the local bench in 1973.

"I grew up in his courtroom. Watching his trials are some of my earliest memories," recalled Karesh. "I would go with him to his courtroom on weekends when he was working. I pretended to be a judge when I was 5 years old."

The family lived in San Francisco's Park Merced neighborhood "in the fog," he said. His father died in 1996, while his mother died in January. Karesh's older sister, Barbara, 60, lives in Concord with her wife, Joy Accosta. In 2008 he married the women, who have been together since 1979.

Jonathan Karesh, who now lives in San Mateo, graduated from UC Berkeley with a U.S. history degree. He earned his law degree in 1995 at the UC Berkeley School of Law.

He was a San Mateo county deputy district attorney for nearly 13 years. In 2000, then-governor Gray Davis appointed Karesh to the San Mateo bench. He was sworn in a year later; Karesh publicly came out of the closet in 2006.

"I was out to friends and family but not out at work," said Karesh, who credited Pfeiffer with advising him on how to come out. "San Mateo, what I like about it is it's a very progressive county. Since I came out I have not had a single negative comment. Everybody has been fine with it; it's been a very positive experience."

At the moment there are three LGBT judges on the San Mateo bench; but Karesh said his colleagues are not fully out of the closet. At least one is a lesbian, according to the latest demographic data about the makeup of the state's courts.

As presiding judge, Karesh will oversee the management of a court with an annual budget of almost $50 million and a staff of nearly 300 people. He will also play a role in who is appointed to vacancies on his court's bench, as the governor's office confers with the presiding judge for advice on judicial appointments.

Karesh has no ambitions to be named to a state appellate court seat. He plans to remain on the San Mateo bench through at least 2025, when he will be eligible to retire.
"At this point, I don't know if I will retire or not. It would not surprise me if I stay on the bench," said Karesh, whose current judicial term is up in 2020.

Earlier this year the local LGBT bar association, known as Bay Area Lawyers for Individual Freedom, named Karesh its mentor of the year. Next month he will be feted as the San Mateo County Trial Lawyer's Association Judge of the Year.

"It's been a few good things happening in the last few months," noted Karesh, who celebrated his election as presiding judge with a trip to Monterey last weekend with his boyfriend, a lawyer based in San Francisco who is not yet out.