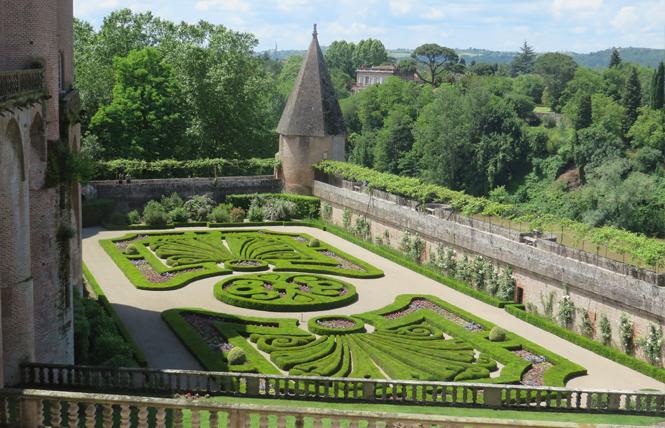 You can visit walkable cities, stroll sandy beaches, and enjoy magnificent meals in southern France, in summer, without the crowds, as my husband and I discovered on a recent trip to Toulouse, Montpellier, and Marseille.

Toulouse
Toulouse is a lively, affluent city of about 500,000, nicknamed the "Pink City" due to the predominance of buildings in red brick. Violet is another emblematic color, and Toulouse violet products are everywhere.

Our base was Citadines Wilson, a comfortable and centrally located "apartment hotel." There's a front desk staffed 24 hours a day, quiet air conditioning, and a coin laundry off the lobby. Nearby was a vending machine for baguettes, restocked daily. Welcome to France!

Toulouse's old town is pleasant and nearly car-free. We joined the crowd on Place de la Daurade on the banks of the Garonne to watch sunsets. For an evening stroll, locals recommended Place Sainte-George, where Emile Restaurant serves cassoulet, a Languedoc dish.

Marche Victor Hugo is the best of Toulouse's many covered markets, with a huge selection of produce, fish, and meats. The second floor has inexpensive restaurants, including Le Louchebem (butcher). We enjoyed a delicious lunch with, not surprisingly, generous portions of meat.

Throughout the trip, almost every restaurant offered prix fixe choices and was "servis compris," meaning tip included. One officially had Michelin's "Bib Gourmand" rating, signifying "exceptionally good food at moderate prices," but that describes most restaurants we visited.

Le Bibent, at 5 Place du Capitole, whose elegant Belle Époque interior had an elaborate painted ceiling and gilded columns, was our favorite in Toulouse. Our luscious dessert was a Vanilla Millefeuille: delicate layers of puff pastry with salty butter caramel sauce drizzled on top.

Nearby cavernous Couvent (convent) des Jacobins, built in 1229, has a ribbed vault imitating a palm tree. On the other side of Capitole, Cathedrale Sainte-Etienne has the best-sounding organ in Toulouse.

"Hotels particuliers" are luxurious private mansions built by wealthy merchants starting in the 1400s. The best example is the Hotel d'Assezat, built in 1555, which now houses the Fondation Bemberg museum. The art ranges from the Middle Ages to the 20th century; lunch on a covered porch facing the courtyard featured a delectable duck confit.

Larger and full of medieval sculpture is Musee des Augustins, housed in a converted Augustine monastery built mostly in the 14th and 15th centuries and abruptly repurposed after the French Revolution. The former cloister shelters a dozen alarmingly fierce gargoyles; the former church presents organ concerts.

One easy walk crosses Pont Neuf, continues on the Toulousian equivalent of Manhattan's High Line Park, and returns via Pont Sainte-Pierre. Continue on the Passerelle Viguerie, a steel walkway suspended over the Garonne, past the Hopital (hospital) de la Grave to Toulouse's largest museum, Les Abattoirs.

Built as a slaughterhouse in 1831 and converted in 2000, this immense contemporary art museum displays a massive theater backdrop painted by Picasso in 1936 and has a great cafe.

Entertainment options are numerous. We visited during the annual "Flash Bach," a mostly-free three-day festival featuring Bach's music in venues all over the city. The Ensemble La Fenice performed on baroque instruments in 17th century Chapelle des Carmelites, as we admired the gorgeous paintings all around us.

Toulouse has a Pride march every June with related events starting in May (http://www.pridetoulouse.com). LGBTQ-popular Shanghai Express offers drinks and dancing at 12 Rue de la Pomme. Le Bear is a bear bar at 44 Boulevard de la Gare near the train station; theme nights start as early as 7 p.m.

Toulouse is great for day trips; Albi and Carcassonne are especially popular.

The museum displayed fascinating photos of Toulouse-Lautrec with his friends, including the artist in drag. A video explains the transformation of the palace-museum over the centuries. Outside were beautiful, formal gardens overlooking the Tarn River.

Nearby Le Clos Sainte-Cecile served us an exquisite lunch on a lovely, tree-shaded outdoor terrace. 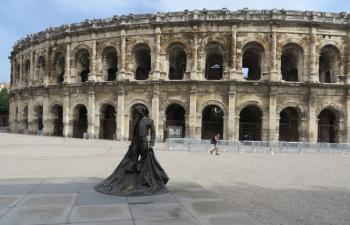 A statue of a bullfighter stands outside an old Roman arena in Nimes, France. Photo: Charlie Wagner

Montpellier
Montpellier's 300,000 population is about one-third students. There's a non-stop cafe scene and many inexpensive European, Asian, and Mexican restaurants.

It's France's fastest-growing city with a car-free old town, an interesting mix of classical and avant-garde architecture, and beaches reachable by public transit.

At the center is the huge Place de la Comedie, a pedestrian-only plaza connecting old and new districts. Most trams stop there, and it contains the tourist office, whose map has detailed directions to beaches. Street performers entertain day and night.

The city is full of small, peaceful squares, many created when churches were destroyed during religious conflict. One rebuilt church is dedicated to local favorite Sainte-Roch. A cholera epidemic in the 1800s caused a renewal of religious fervor and inspired its reconstruction.

Adjacent to Comedie is the largest art museum in Montpellier, Musee Fabre, showing European art from the 15th to 21st century. Tickets include admission to nearby Hotel de Cabrieres-Sabatier, a mansion built by a wealthy family in the 1800s, restored in 2001 as a decorative arts museum.

Montpellier has two distinctive newer districts. The Antigone district is much-touted in guidebooks, but the neo-classical buildings felt bland and impersonal. More fun to visit was Port Marianne, a growing condo and office district adjacent to the Jean Nouvel-designed City Hall.

Almost no two buildings are alike and all are under 10 stories, so the scale feels human. There's an unmistakable sense of whimsy and one building is even labeled "Le Nuage" (cloud).

For a splurge, we chose the Michelin-starred La Reserve Rimbaud overlooking the River Lez, and ordered the "surprise" menu.

One course was lobster pieces with small avocado balls, grapefruit pieces, and a "radish tower" with thin-sliced radishes combined with a lobster salad, accompanied by tiny smoked eels. Magnifique.

For live music, take the tram to Jazz Action Montpellier to enjoy its no-cover Thursday evening. We mingled with the friendly hipster crowd and enjoyed good wine for 3 euros.

Our favorite beach was Les Maguelone, reachable by tram, bus, and a short walk. In summer, you can take Bus 32 to the Velomagg Plage stop, present your bus ticket and ID, and borrow a free bike for the day.

We crossed a tiny pontoon bridge over an etang (saltwater lagoon) to a tiny island. After exploring the 12th century Romanesque church, we savored a lunch next door.

Biking for about 10 minutes, we passed a beach club renting lounges and umbrellas and a long clothing-optional beach. The gay beach is another one-third mile. The sand was soft and golden, the water was warm and the depth increased gradually. Non-bikers can take Le Petit Train de Palavas from Palavas-les-Flots.

Another day we took Bus 106 to La Grande Motte for some wacky, pyramidal architecture and another swim. The gay beach is behind Gate #70.

To see the best-preserved Roman arena in the world, we ventured to Nimes. The arena held up to 24,000 people originally but is now set up for modern concerts; Sting performed a week later. Bullfights are held several times a year and Ernest Hemingway spent time there. A beefcake-filled "Spartacus show" happens in April.

Another impressive Roman artifact is La Maison Caree, a Roman temple dedicated in 4 AD but used continually over the centuries; an engaging film is shown inside. With a car, you can visit and walk over or swim under the Roman aqueduct Pont du Gard.

Montpellier's LGBTQ organization was created in 1995 and celebrates gay Pride every July (www.montpelliergay.com). The Gay and Lesbian Pride Office at 21 Boulevard Pasteur is the best source for information on LGBTQ venues. 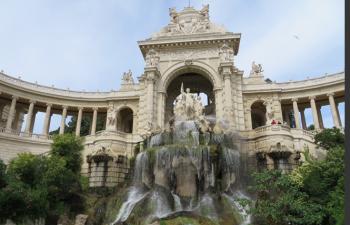 Marseille
Marseille is a popular cruise ship port and changed dramatically when it became the European capital of culture in 2013. The grittiness is gone.

With nearly a million residents, Marseille feels multicultural, and is a great base for day trips in eastern Province. The Myth of Marseille claims it was founded by the matriarchal Ligurians looking for a new port for trade, not for conquest.

Our well-equipped VRBO apartment in the Vieux (old) Port had insulated windows, quiet air conditioning, and was very convenient. Cours d'Estienne d'Orves, the largest pedestrianized space in Marseille, was a block away and full of restaurants. Classy restaurant and bookstore Les Arcenaulx is outstanding.

Across the port and opened in 2013, Musee des Civilizations d'Europe et de la Mediterranee (MuCEM) was our first stop. Entry is via restored medieval Fort Sainte-Jean, built in 1660.

The fort is connected by a dramatic roof-level footbridge to a strikingly modern building screened by a concrete lattice, which presents multiple exhibits. "OR" (gold) was the largest exhibit, showing how the precious mineral was viewed and extracted from antiquity to the present.

MuCEM has many restaurants. At the high end was La Table, with a prix fixe lunch starting with a salad of thin-sliced octopus, black radishes and micro greens in light olive oil and lemon juice. La Cuisine buffet at half the price had dishes just as elaborate.

For a more low-key afternoon, we visited Musee Cantini, housed in a former private home and with a good collection of Surrealist and Impressionist artists. Labels had two audio guide numbers: one played a song complementing the paintings.

The waterfront has a few beach clubs, but the Parc National des Calanques has cleaner water. Calanques are fjord-like rocky inlets cut into limestone cliffs, accessible only by sea or on foot. We took a "petit circuit" boat tour to see three calanques, including the gay-popular Sugiton. You can hike to Sugiton, but the route is difficult and there are no services or bathrooms.

One easier alternative is the bus to charming but popular Cassis. We spent a day at Le Grand Large beach club, enjoying lunch and a swim. There's also a free beach with a shower but no changing room. 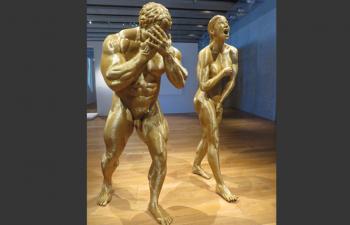 Bouillabaisse was invented in Marseille and we were determined to try the local version. Our VRBO host recommended Miramar Restaurant, but warned it was expensive. Instead we caught Bus 83 to popular and less expensive Chez Fonfon, dining as we watched the sun set.

Don't miss the huge fountain in front of Palais de Longchamp, which houses two museums. From there you can walk to La Friche La Belle de Mai, a former tobacco factory converted to a multi-purpose art venue.

For an evening at the Opera Municipale de Marseille, we found great seats at a reasonable price for the Verdi opera "Ernani." Sight lines, singing, production, and people-watching were delightful.

After a short visit to Marseille's seedy flea market, we headed to the Quartier des Antiquaires and wandered into an antiques street market held four Sundays a year. Prices were marked, no haggling necessary.

Gay options are extensive in Marseille. The gay Pride parade and celebration is held in early July. Near the Vieux Port, we easily found LGBTQ-owned Caffe Noir at 29 Rue de la Palud, open 9 a.m. to 8 p.m.

We ended the trip relaxed and well fed. We walked for miles, swam in the sea, and mostly had French tourists for company. It felt like a discovery, our favorite kind of travel.