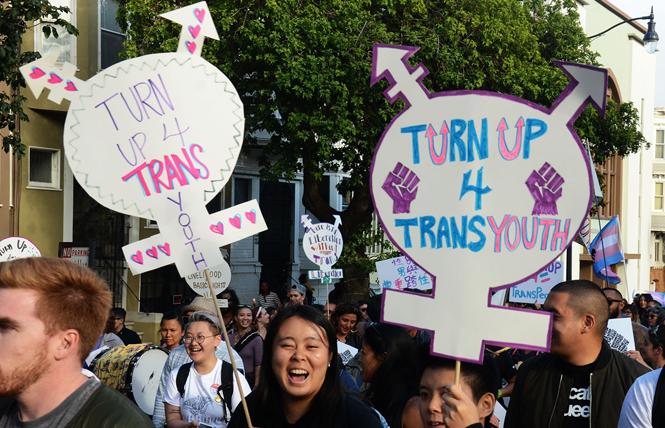 The Trans and Dyke marches are expected to draw thousands of queers to San Francisco this weekend.

Dyke March
The 26th annual San Francisco Dyke March takes place Saturday, June 23. It will honor the lesbians who first started the tradition in 1993 with this year's theme "Continued Resistance."

In the current political environment when President Donald Trump and his administration continue to roll back LGBT civil rights, this year's Dyke March will remember the spirit of its foremothers and the original purpose of the march: to bring awareness to the issues affecting queer women and to demonstrate the community's strength in numbers, and, of course, to resist.

"This year, we want to focus a lot on our history and remember the people who came before us and not forget our past," said Haley Patoski, a lesbian and chair of this year's march.

It was the 1993 Lesbian Avengers' Dyke March in Washington, D.C. that attracted 20,000 women and inspired the first San Francisco march a few months later. Today, the local gathering draws between 20,000 and 30,000 queer women.

"It started as a protest with some really pissed off lesbians," Patoski said. "We don't want people to forget why we are here."

The march will also celebrate a day in which women will command the Castro, a normally male-dominated neighborhood.

On Saturday at 5 p.m., participants will gather at 18th and Dolores streets, where the Dyke motor contingent and the disabled senior trolley will start the march. The women will walk through the Mission and the Castro, and for the second year in a row, end the march back at Dolores Park. Organizers encourage all who participate to help clean up the park after the march.

Though a tone of resistance will be a strong component of the event, it will also be a lot of fun. As per tradition, the celebration will kick off with talks from community leaders and entertainment during the rally in the park starting at 11 a.m. Saturday. There will be an opening blessing from Bay Area American Indian Two Spirits and comments from Kate Kendell, the outgoing executive director of the National Center for Lesbian Rights.

Among the entertainers are trans band Polythene Pam, drag kings Rebel Kings, musicians Lotus Sky and LaMantia, and Kin Folkz, founder and director of Spectrum Queer Media, will be the march's grand marshal. Folkz is also a community grand marshal for the San Francisco Pride parade.

For the first time, the event will have an official after-party at Folsom Street Foundry, 1425 Folsom Street, from 8 p.m. to 2 a.m. There is a $5 cover at the door, half of which will go directly to the Dyke March.

For the past 25 years, the Dyke March has remained an all-volunteer, grassroots operation. The march is supported by donations from local business owners, community organizations, and individuals. If interested in volunteering, visit http://www.thedykemarch.org/volunteer-1.

Trans March
Gavin Grimm, the young trans man from Virginia who has so far unsuccessfully fought for the right to use the boy's restroom at school, will be front and center at the 15th annual San Francisco Trans March Friday, June 22.

The march this year doesn't have a theme, but its mission remains the same: to provide a safe space for trans, nonbinary, and gender-nonconforming people, and to continue the fight against trans discrimination and violence. It is one of the largest trans events in the world, according to its website.

"This allows our community the chance to mobilize, come together, and celebrate our lives," said Nikki Calma, a trans woman and Trans March committee board member. "The marchers gain a sense of empowerment and are given a space to find resources and support and gain a sense of who they are."

The daylong event starts with a Trans Youth & Elder Brunch, hosted by San Francisco's Lavender Youth Recreation and Information Center and Openhouse, from 11 a.m. to 2 p.m. The brunch fosters intergenerational dialogue and is open to people of all ages. It takes place at the playground in Dolores Park.

There is also a kick-off with coffee and doughnuts at Good Vibrations, 603 Valencia Street, from 11 a.m. to noon, for marchers to get their caffeine fix before the march.

From 2 to 6 p.m. a resource fair will be held in the park featuring a variety of vendors. This year, the fair will offer HIV and gonorrhea testing and screening. During that time, Our Family Coalition will sponsor a family area at the playground.

Entertainment takes place from 3 to 6. Shena Rose, a drag performer, will be there, along with musician and visual artist Inocente Po Guizar, dance group River Bradley, and a salsa bomba performance by In Lak'ech Dance Academy.

The street march starts at 6. People begin to gather around 5:30 at 18th and Dolores streets. The first three contingents include a motorcycle contingent, the disabled senior trolley, and those who will hold the "Trans March" banner including Grimm, representatives from San Francisco Community Health Center's Trans:Thrive, San Francisco AIDS Foundation, and TGI Justice.

The march will travel along Market Street, turn on Taylor Street, and end at Taylor and Turk streets, near the site of the Compton's Cafeteria riot of 1966, one of the first recorded LGBT-related riots in the U.S. There, Our Lady J and Grimm will speak, starting at 7:30 p.m.

There are two after-parties this year, one for all ages and the other for 21 and over. Wicked Grounds, 289 Eighth Street, will host "Transfabulous," a sober party for everyone from 7 to 10 p.m. "Bustin' Out 12: Party Against the Prison Industrial Complex" will take place at El Rio, 3158 Mission Street, from 8 p.m. to 2 a.m. for adults.