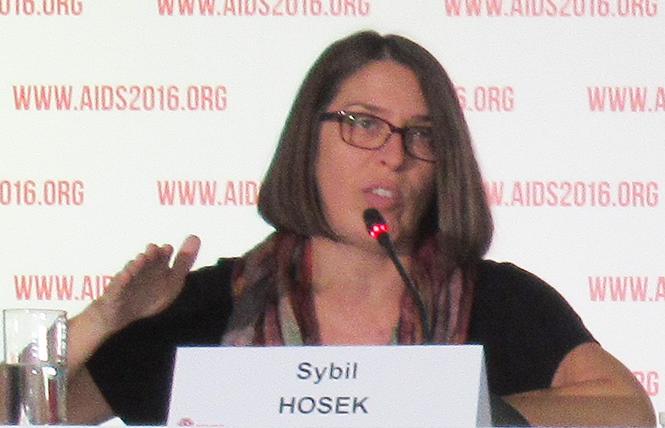 The U.S. Food and Drug Administration this week approved Truvada PrEP for adolescents, making the once-daily HIV prevention pill more widely available to a group with a disproportionately high risk of infection.

The Lavender Youth Recreation and Information Center, or LYRIC, a San Francisco agency that serves LGBTQ youth, recently launched a PrEP for youth program to encourage more adolescents and young adults to take advantage of this effective prevention method.

"PrEP has been shown to be safe for preventing HIV in adolescents, yet youth have faced a number of barriers accessing PrEP," Dr. Albert Liu of the San Francisco Department of Public Health told the Bay Area Reporter. "This approval is a terrific step in expanding access to this important prevention option for youth in our community who are vulnerable to HIV."

Young people age 13 to 24 accounted for 21 percent of new HIV diagnoses in 2016, according to the Centers for Disease Control and Prevention. Over 80 percent were young gay and bisexual men, with young black and Latino men being most heavily affected.

In San Francisco, young adults age 18 to 24 accounted for 14 percent of new HIV diagnoses in 2016, according to the latest SF DPH HIV epidemiology report. No adolescents age 13 to 17 were found to be HIV-positive that year, and no children under 13 have been diagnosed with HIV in San Francisco since 2005.

The FDA approved Gilead Sciences' Truvada (tenofovir DF/emtricitabine) for pre-exposure prophylaxis in July 2012 for people age 18 and older. Truvada has long been approved for HIV treatment for both adults and pediatric patients, but until this week the prevention indication did not extend to adolescents. The new approval covers youth weighing more than 35 kg, or 77 pounds, about the average weight of boys and girls at age 11.

Doctors may prescribe approved medications as they deem appropriate, and some providers were already offering PrEP off-label to youth under 18. But the new approval should make PrEP available in more places and make it easier to obtain insurance coverage.

LYRIC's PrEP for youth program, a collaboration with the health department and the San Francisco AIDS Foundation, is aimed at adolescents and young adults up to age 24. In California, minors age 12 and over can receive PrEP without permission from a parent or guardian. Young people of all genders and sexual orientations are eligible.

The program features navigators who will help set up appointments, accompany clients to get PrEP, and help them stay on track while taking PrEP. LYRIC primarily works with Dimensions Youth Clinic, a special clinic for LGBTQQ youth at the Castro-Mission Health Center, as well as the Cole Street Clinic and SFAF's Strut, LYRIC Executive Director Jodi Schwartz told the B.A.R.

SFAF officials did not immediately respond to a request for comment.

"My generation did not live through the AIDS crisis and, fortunately, grew up in a time when antiretroviral treatment allows people to live long and healthy lives," said Chad (who gave only his first name), a LYRIC youth advocate and MPH student. "It is important for me to empower youth to access PrEP while remembering the queer history that made medications like this possible. PrEP is an indispensible tool and great option for those who want to live and love on their own terms."

People seeking PrEP first need to get an HIV test to ensure they are not already infected, as well as a hepatitis B and kidney function test, as Truvada should not be used by people with kidney problems. HIV testing should then be repeated at least every three months while taking PrEP, along with regular tests for sexually transmitted infections.

PrEP is covered by Medi-Cal and San Francisco has set up a PrEP fund for youth. Gilead offers patient assistance and copay programs to help people afford Truvada for PrEP. To date, this has only been available to those age 18 and older, but that may change with the new approval for adolescents.

Clinical trials of adults have shown that, when taken consistently, Truvada reduces the risk of HIV infection for men who have sex with men by around 90 percent, with infection rates approaching zero for people who take it at least four times a week.

A study of young gay and bisexual men age 15 to 17 in six cities showed that many adolescents can do well on PrEP, but they do better with more frequent monitoring and support. Adherence was high when participants were seen every month, but dropped off when monitoring was extended to every three months. Three new infections occurred during a year of follow-up - about twice the rate seen in a parallel study of men age 18 to 22. Side effects were mostly minor and similar to those observed in adults taking Truvada.

"The approval of oral PrEP for adolescents is a milestone in HIV prevention for youth," lead researcher Sybil Hosek, Ph.D., of Stroger Hospital in Chicago told the B.A.R. "This indication allows prescribers to feel confident in the safety and tolerability of PrEP for sexually active youth. It is critical that we as providers do all we can to simplify access to HIV prevention for adolescents and young adults."