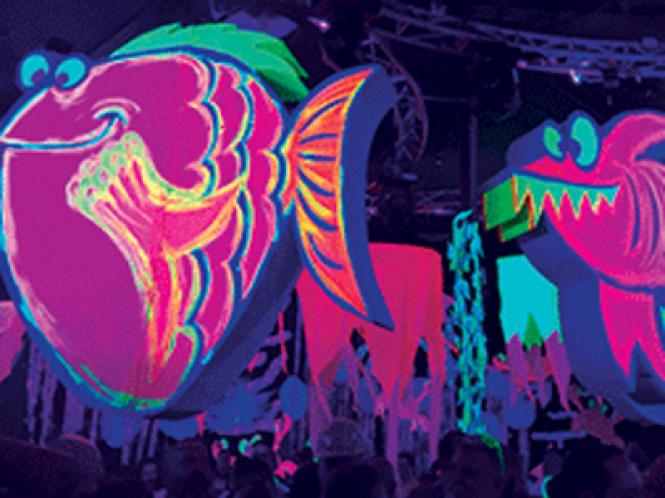 They've brought their glowingly queer presence to Burning Man, to nightclubs around the Bay Area, and to faerie gatherings in the countryside. This Saturday, with lead artist Brian "Chickpea" Busta, the fluorescent flair of the Comfort & Joy community merges with the serene beauty of the National AIDS Memorial Grove for the first Playa in the Grove.

Although it is a nonprofit collective, the art of Brian Busta stands out as 'the look' of Comfort & Joy; bright fluorescent colors, flapping flags and giant cartoon characters. Busta works out of his home in the Castro district, where many a festive flag or creature has emerged, only to be shipped out to a party, then stored for later use at another event.

"We just moved into a bigger storage space and filled it up," said Busta.

A certain durability is required for Playa art at Burning Man, where the C&J crew has hosted a queer camp since 2003. Once a cute cluster of homo-friendly areas, the LGBTQ groups have grown each year to an entire neighborhood that includes the Glamcocks, Beavertons, Comfort & Joy and BAAAHS (Big Ass Amazingly Awesome Homosexual Sheep), all of whom collaborated on last year's Galactic fundraiser event.

So, how will they bring this fun -without the occasional dust storm- to Golden Gate Park?

"It all started when we wanted to figure out how to do an event outside of a nightclub," said Busta. "It's the 25th anniversary of the AIDS Grove. It seemed like a fun idea to bring all our freaky friends to the Grove to celebrate."

Comfort & Joy events outside of Burning Man include fundraisers for their camp. The most known is the annual Afterglow party, which has grown exponentially each year.

Afterglow's first events were small parties, some in the Western Addition, said Busta, of the fundraiser's origins 13 years ago. "Then we did it at Dance Mission, and then Cell Space, and for the past four years at Sound Factory."

What's up for the future of such events that draw capacity crowds? This year's Afterglow sold out.

"We actually may have outgrown Sound Factory," said Busta with a tone of awe. "I could see it exploding with fun, you could see all the effort put into it."

Asked if the popular dance party has become too big, Busta countered with the idea of expanding it further.

"Maybe in a stadium," he said. "I see it as a daytime festival. People are really excited about new ideas, and other artists really contribute a lot."

Giant glowing cartoon octopi are a few sizes up from the small jewelry Busta made for more than a decade back in New Hamphire. Originally from Andover, Massachusetts, Busta, 52, originally "worked small. Then I started doing canvas paintings. It was so fun to make something big and fast."

Busta connected to Burning Man soon after moving to San Francisco, and attended his first Burn in 1996. Since then he's been building, decorating and creating environments that get more ambitious.

"It's so much work," said Busta. "We just kept going and building art. It was nice to see people come back and help it grow. I like things to get bigger."

Busta mentioned the roots of the Comfort & Joy and gay Burning Man camps, which he joined in 2000, as having roots in Radical Faerie culture. He even decorated a maypole at a recent Beltane festival.

"Kitten Calfee really wanted to blend communities," Busta said of one of the camp's early cofounders. "There were already faeries who went to Burning Man, and we had that hippie vibe going on. Our camp is sex-positive and we have yoga, food. Now there are many camps. It's amazing how it all started in the desert and how it's created its own little world."

And although it's not an official Flagging event (the next one is July 30), those with a flair for fabric and flow arts are certainly welcome to add their colorful tribute.

Among the dozen art projects, David Cooney's Heart Space Labyrinth offers a contemplative side to the event. Stories of loss and healing will be accepted for a group art project, where personal and anonymous expressions of loss, grief and AIDS stories in words, poetry, art or altar items will be added to a collective art experience.

Coordinating such diverse projects requires a lot of collaboration.

"When we formed the board, we wanted to be more legit," said Busta. "We have programming, communication, and other committiees. It can be exhausting, but we spread out the responsibilities. We want it to last."

Michael Cooper has served as a production manager for Comfort & Joy events since 2010. He's worked on every Touch (the more intimate, sex-themed event) and Afterglow party since then, and several years' worth of Burning Man encampments.

"Usually for AfterGlow, it's an eight to ten-hour set-up," said Cooper. "This year we had 100 volunteers who did everything."

Along with renting a truck, picking up everything from art supplies to tools, fabric, and staple guns, Cooper guides volunteers where help is needed.

"A lot of people don't know exactly what to do. My job is managing the volunteers, giving them a little direction, and getting them fed."

Cooper acknowledged the growth of their events, and mentioned the varying ideas for the future expressed by organizers.

"For Touch, we want to maintain a smaller venue," said Cooper. "For Afterglow, we might go to a larger venue. People who have been with Comfort & Joy for years want some more intimate events like the old days."

Cooper mentioned how C&J welcomes and encourages artists to participate with art grants for materials.

"We've also invited the flagging community," he said. "It's just a way to make the Grove a little more festive and celebrate."

Richard DelleFave, who is on the Board of the AIDS Grove, and a veteran Comfort & Joy Burning Man participant and board member, is one of those responsible for starting the Grove project.

"Last fall, with the folks in the programming committee, we discussed how to bring Playa projects into the city, and I thought of the Grove as a perfect place for that."

DelleFave mentioned the numerous events held at the AIDS Grove, including the fundraisers Light in the Grove, gardening work days, weddings and memorial services. The Grove gets permits from Parks and Recreation, particularly if amplified sound is involved. The daytime fun will be a nice change from comfort & Joy's all-night parties at Pride.

"We hope for a playfulness at the event," said DelleFave. "That's definitely something that Brian brings to the table; zany and funny. There'll be dancing and picnicking; it'll have its own sunny atmosphere.

"Keeping in mind that it's a remembrance as well as a celebration," he added, "I can't think of anything more befitting."