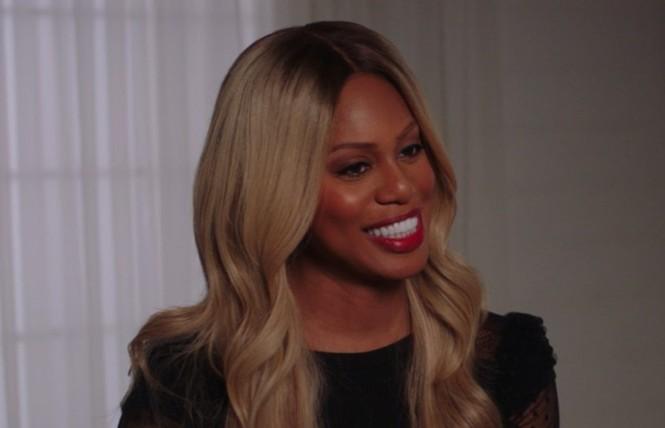 Adding celebrity star power to its virtual statewide gala next weekend, actor Laverne Cox will accept an award from Equality California for her work in "Disclosure," an in-depth look at Hollywood's depiction of transgender people.

Cox, a trans actor and producer, will accept the Equality Visibility Award on behalf of the groundbreaking Netflix documentary that was released this summer.

As the Bay Area Reporter previously reported, the online awards gala will feature "Pose" star, actress and advocate Angelica Ross as host. Among the honorees will be husbands Pete and Chasten Buttigieg, who will receive the Equality Trailblazer Award.

International superstars Gloria Estefan and Rita Moreno will present Lear's award. Lear, 98, is a pioneering television writer and producer who made many hit shows in the 1970s, including "All in the Family," "The Jeffersons," and "One Day at a Time."

Estefan and Moreno are friends with Lear and are featured in the hit reboot of "One Day at a Time," which was just added to CBS' fall lineup, the release stated. As the B.A.R. previously reported, Moreno received the Ally award at last year's San Francisco Equality Awards.

Joining Cox in accepting the Visibility award will be "Disclosure" director/producer Sam Feder and producer Amy Scholder. Cox is an executive producer on the documentary.

As the B.A.R. reported in March, EQCA had initially postponed two of its planned big fundraising galas in the spring, in Sacramento and San Francisco, due to the pandemic. The San Francisco event at the time had been pushed back to September 11 and was to be held at a hotel in atop the city's Nob Hill.

And EQCA was still hopeful it would be able to hold the awards dinners in San Diego (June 5), Los Angeles (September 26) and Palm Springs (October 17). But with the state unable to control transmission of the virus, those plans had to be scrapped.

"2020 has challenged the LGBTQ+ community in ways we could never have imagined, but challenging times create heroes, and we cannot wait to come together virtually and celebrate some of this year's heroes," EQCA Executive Rick Chavez Zbur stated in August when the organization first released its plans. "The Equality Awards are a critical opportunity for members of our community to honor the leaders and organizations whose selfless work helps to advance LGBTQ+ civil rights and social justice."

There will still be a local aspect to the event, as EQCA will be hosting regional pre-show cocktail hours to honor local individuals in Sacramento, San Francisco, San Diego, Los Angeles, and Palm Springs. In the Bay Area, former San Francisco supervisor and assemblywoman Fiona Ma, now the state's treasurer, and gay Assemblyman Evan Low (D-Campbell) will be honored. In Sacramento trans advocate Evan Minton, who is the plaintiff in a landmark lawsuit against a Catholic healthcare provider that denied him medical care, will be honored by EQCA.

Other local honorees include gay men UC Regents chairman and former assemblyman John A. Pérez, who recently disclosed he was diagnosed with COVID-19, and founding director of the Williams Institute at UCLA Law Brad Sears, and trans advocates Connor Maddocks with San Diego Pride and Bamby Salcedo, president of the TransLatin@ Coalition.

Those tuning in to the broadcast will be treated to musical performances by lesbian singer Melissa Etheridge; Betty Who; Alex Newell, who identifies as gender-nonconforming; Shea Diamond, and Robin S.

Tickets to gain access to the private website where the event will be livestreamed, which begin at $100 for individuals, can be purchased online at http://www.eqca.org/equality-awards