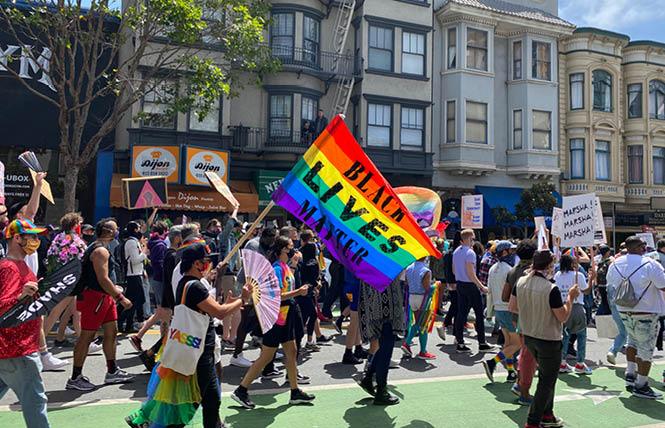 The unofficial 50th annual commemoration of LGBT Pride in San Francisco Sunday, June 28, was a return to Pride's roots in protest, as hundreds of demonstrators citywide marched in solidarity with the Black Lives Matter movement.

The People's March and Rally: Unite to Fight began at the intersection of Polk and Washington streets at 10:30 a.m. As the Bay Area Reporter previously reported, this event was spearheaded by longtime activist Alex U. Inn and Juanita MORE!, who planned it in conjunction with nationwide activism on behalf of the Black community following the police killing of George Floyd in Minneapolis last month.

That protest — one of three events Sunday (the others were a protest titled 'Pride is a riot' and a rally in the Fillmore district honoring Black trans people) — was planned to follow the route of that first "gay-in" in 1970, which later grew to become the San Francisco Pride parade.

While this year is the occasion of the parade's 50th anniversary, the coronavirus pandemic led to the cancellation of the official parade in April.

Inn, a former board member of SF Pride who has been critical of the more assimilationist direction that the parade has gone in, has said that having a people's Pride march has been a longtime dream.

"We are celebrating 50 years of Pride and we are the people's march," Inn said before the march began. "We are giving it back to the people. ... Let's have a rally and a party and the best Pride weekend we can give each other."

Hundreds of marchers made their way down Polk Street to City Hall behind a "People's March" banner, with Inn leading chants of "white silence is violence" and "no justice, no peace. No racist police." When they weren't chanting, marchers listened to music playing from a bus provided by the Burning Man organization BAAHS (Big Ass Amazingly Awesome Homosexual Sheep).

Christopher Vasquez, a gay man who was providing assistance on that bus. He told the B.A.R. that he hopes the People's March becomes the new model for Pride celebrations.

"Today's People's March and Rally is the first time that Pride has been a true protest against discrimination and oppression in decades," Vasquez wrote in a text message to the B.A.R. "It's great to see thousands of people coming out to a truly organic pride event to proclaim that Black — specifically Black Trans — lives matter. This is what Pride should be every year and I hope it continues this way instead of a corporate pink-washed party."

(While Vasquez serves as communications director for the National Center for Lesbian Rights, he stressed that he was with BAAHS in a personal capacity.)

"Pride is getting back to its roots — a protest against police brutality and societal repression," Wiener said. "We must recommit to the fight for justice and equity."

Police raise batons at 'Pride is a riot' march
Wiener's opponent in his November reelection bid for state Senate, queer educator Jackie Fielder, was also protesting Sunday but was at the "Pride is a riot" march that kicked off adjacent to Mission Dolores Park in the afternoon.

"It is not enough to demand police out of pride," Fielder wrote in a text message to the B.A.R. "We need to defund the police to fund affordable housing, education and healthcare for Black, indigenous and all marginalized communities."

Police tried to halt that march, with officers raising batons at protesters.
According to KQED, when the march made its way onto Valencia from 18th Street, about a half-dozen officers formed a line in an attempt to stop the march, accompanied by a white van.

The marchers surrounded the police, who were unable to stop the march from making its way downtown.

After some individuals began to kick and punch the van, police officers raised their nightsticks at them and pushed them away.

Eventually, the van drove away after a window was smashed in with a skateboard.

VIDEO: Demonstrators at an unofficial San Francisco #Pride2020 march cheer as they chase off a police van after hitting it with a skateboard

San Francisco Police stated to the B.A.R. that there were no arrests made in connection with this incident.

"Officers were assaulted with bottles, signs and improvised wooden shields. One officer was sprayed in the face with paint. A van was spray painted with anti police graffiti, windows smashed and a tire was slashed," a San Francisco Police Department statement Sunday evening reads. "Officers were able to move the crowd and exit the area. At this time no arrests have been made and the investigation is ongoing."

Fielder told the B.A.R. of the incident that "this is just another example of why we want corporations and police out of pride."

COVID pandemic helped change attitudes toward racism
Earlier in the day, once the People's March reached City Hall around noon, a small dance party preceded a series of speakers and performers.

MORE! drew attention to the prescience of Pride's sudden transformation in this milestone year.

"Today what we did — marching down Polk Street — is what our queer brothers and sisters did 50 years ago," MORE! said. "Pride has always been a time when we confirm our lives, our dignity. We have celebrated monumental victories and mourned tragedies, but the number one thing that we have always done is resist."

Inn, who is Black, said that because of the coronavirus outbreak, which led to stay-at-home orders in much of the nation in March, white people had the time to see the video of Floyd's killing and gain insight into what Black Americans live with.

"For Black people it was almost like 'whoops, there's one more,'" Inn said. "That's how common it was. But because you were in a pandemic, and at home, you got the chance to finally see what we see daily."

Inn thanked the marchers for showing up and advocating for Black people and other people of color.

Inn asked the white people in the crowd to raise their fists — "wow, there's a lot of you," Inn noted once they did so — and take an accountability pledge.

Around 3 p.m. marchers began to make their way from City Hall to the Castro neighborhood, the home for the city's LGBT community. They were joined by some of the Pride is a riot protesters.

Once there, demonstrators had another pop-up dance party.

Shaun Haines, a Black, gay man who is the co-chair of outreach and inclusion for the Castro LGBTQ Cultural District, was there and echoed some of what Inn said about how the pandemic changed long-held perspectives.

"We are now in a space where we are talking about how important it is to do things, more than we did before COVID-19 and the current [Donald Trump] administration," Haines said. "We kind of needed this — in a way — to wake a lot of people up. I was so proud to be a participant in the actions associated with today and real ways to bring the community together and make sure our message is one of unity."

Haines said that he felt Sunday's events were a source of "great excitement" and cried during the march down Polk Street not out of sadness but because he is newly hopeful.

"For the LGBT community of San Francisco, what transpired is a return to our roots — protesting like the first Pride parade 50 years ago," Haines said. "What I found today — the love I felt — is that more of our LGBTQ community and our allies are uniting and realizing we have to be united with other cultural demographics." 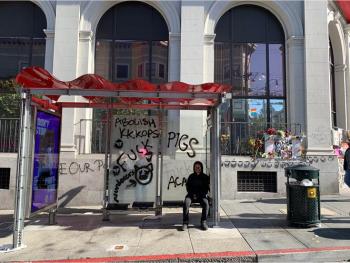 Graffiti and smashed windows in Castro district
Mandelman was at Sunday's events and praised the People's March.

"I thought the march down Polk in the morning was utterly beautiful and captured the very best of Pride," Mandelman said. "What went down in the Castro later that day - in terms of graffiti, vandalism and smashed windows - was sad and unfortunate."

Mandelman was referring to the fact that many neighborhood buildings were graffitied, such as the Bank of America and the Walgreens at 18th and Castro streets, the adjacent bus stop, the CitiBank on Castro Street between Market and 18th streets, and several storefronts that are now vacant on that same block. The Starbucks on 18th Street between Castro and Hartford streets had two windows smashed.

Stuart Goldstein, who lives in the Castro, sent an email about that to public officials and the B.A.R.

"I walked to Castro Street from 18th. I noticed the broken Starbucks window. Then saw the awful graffiti," Goldstein wrote in a follow-up email to the B.A.R. "The mistake was closing the street which invited this event!"

Much of the damage was cleaned or covered up by Tuesday morning.

Inn said in a phone call with the B.A.R. June 30 that they had "never gotten to see this many Black and Brown people hand-in-hand with our white brothers and sisters" in decades of being in San Francisco for LGBTQ pride events.

"It felt like old times in that it was pure and raw and we felt like we were back to our roots —queer and alive and protesting," Inn said, adding that it was particularly special for Black trans people who often face more discrimination than other members of the queer community.

Inn said that this was the first People's March and that there are many conversations about bringing it back next year, and, although it may not be able to go up Market Street due to the regular Pride parade, "the plan is to end in the Castro."

"It's ours," Inn said. "Whoever feels welcome is welcome and we had a tremendous amount of allies who joined us. People brought whatever fabulous side of them to it."

The mayor's office did not respond to a request for comment about the vandalism.

Updated, 7/1/20: This article has been updated with post-march comments from Alex U. Inn.

Updated, 7/1/20: This article has been updated to note that Christopher Vasquez was there in his personal capacity and not on behalf of NCLR.


Editor's note: If you liked this article, help out our freelancers and staff, and keep the B.A.R. going in these tough times. For info, visit our Indiegogo campaign. To donate, simply claim a perk!