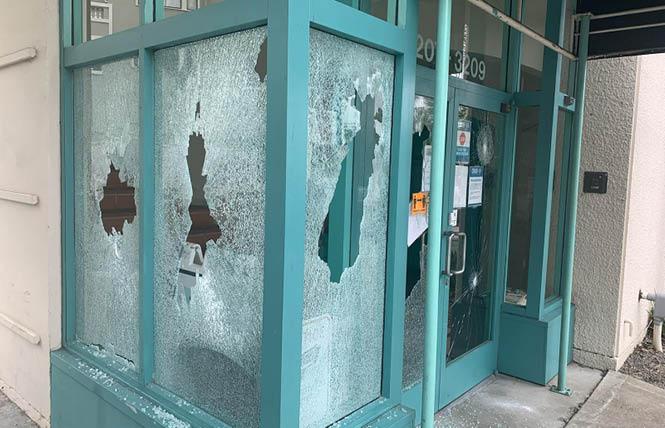 Oakland police on Monday said they were investigating a June 27 incident of vandalism at the LGBTQ community center as a hate crime.

As the Bay Area Reporter first reported online, windows were smashed at the Oakland LGBTQ Community Center last Saturday morning, just hours before its CEO took part in the pink triangle torch procession leading up to the lighting of the triangle in San Francisco for Pride weekend.

In an email to the B.A.R. after this story was published, the OPD media affairs unit stated officers are investigating.

"The Oakland Police Department is aware of this incident and we are actively investigating," an email response stated.

But in a post to OPD's Facebook page Monday, June 29, the department said that it considers the incident a hate crime.

"The Oakland Police Department and the City of Oakland will not tolerate any hate crime against anyone in our community," the post reads. "The department's Criminal Investigations Division is investigating each of these incidents as a hate crime."

(In addition to the smashed windows at the center, police also listed two other incidents that occurred Sunday, June 28: a mannequin and street sign spray painted at Carmel and Coolidge streets, and a residence in the 2500 block of Maxwell Avenue was spray-painted.)

In a Facebook post, Hawkins described what vendors who were setting up in front of the building told him.

"A man described as 'a young skinny white male' on a bike pulled up to the center," Hawkins wrote. "He had a golf club with him and began smashing our windows and yelling expletives. A witness who is an African American vendor began yelling at the man to stop. The man then hopped on his bike and rode off."

Hawkins pointed out in the post that the center is "Black led and queer."

"We have a large banner on our window that says Black LGBTQ Lives Matter Too! We are clear that this was a hate crime that could have caused us to be targeted because we are Black and because we are LGBTQ," he added.

Hawkins went on to thank people who showed up to help clean up.

"We appreciate you so much," he wrote, calling it "an emotional and difficult time."

On Sunday, June 28, Hawkins issued another post on Facebook, calling for increased awareness among public officials and the general public about how the combination of homophobia, transphobia, and racism negatively impacts "the health and wellness of our community as a whole."

"So much more needs to be done in the East Bay to help LGBTQ+ residents, particularly Black/African American, Indigenous, Latino/Latinx, and Asian LGBTQ community members, to know how to report hate crimes, and how to keep our community safer during these challenging times," he wrote.

Hawkins has set up a donation ask on his Facebook page
where people can donate. Already $900 has been raised. People can also donate through the center's website.

Hawkins' post urged people to call the Oakland Police Department at 510-777-3333 "and tell them to make hate crimes against Black and LGBTQ people a priority in Oakland."

"Call the mayor's office and demand to know what the city is doing to make Oakland safer for Black and LGBTQ residents. 510-238-3141," he added.

Additionally, in the June 28 post, Hawkins encouraged people to contact their city and Alameda County representatives and ask what they are doing to support the center and other organizations in Oakland and the East Bay that "support LGBTQ+ people and issues affecting us."

"The few LGBTQ-focused nonprofit organizations that exist in the East Bay are usually poorly funded and often lack the necessary resources to operate effectively and to sustain efforts to meet the many unique service needs of our community," Hawkins wrote.

Updated, 6/27/20: This article has been updated with comment from OPD.

Updated, 6/29/20: This article has been updated with additional comments from Joe Hawkins and OPD.