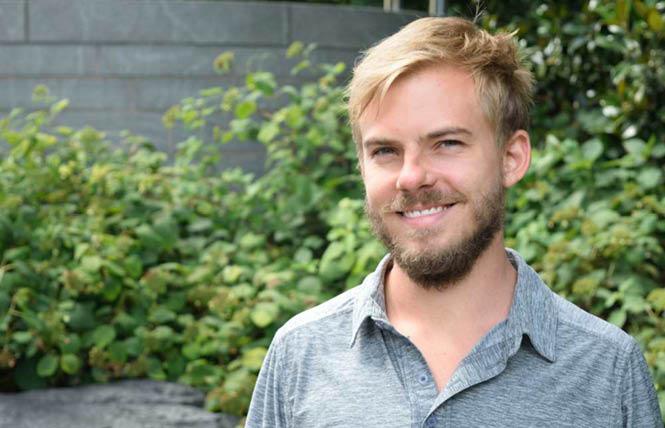 Colton Southworth and his husband bought a new home in Sandy Springs, Georgia in July, and like any new homeowners, decided to landscape it. After being impressed by online pictures of Botanica Atlanta Landscape Design, Southworth decided to give owner Stuart DiNenno a call.

"I called him and our conversation lasted no longer than 30 seconds," Southworth told the Bay Area Reporter in a recent interview. "I told him I recently moved into a new home in Sandy Springs and I had a large project. He asked me if this project was for me and my wife and I said 'no it's for me and my husband.' He said he wasn't interested in working with us."

Southworth, 32, got off the phone, taken aback. Originally from Charlottesville, North Carolina, he said he has never been denied services because he was gay or ever experienced such blatant discrimination.

After the phone call with DiNenno, Southworth decided to write a Yelp review about his experience.

"Contacted today about a very large project in Sandy Springs. The owner asked if the work was for me and my wife, I said no me and my husband and he replied that he wouldn't be interested in working with us," read the review Southworth wrote on Botanica Atlanta Landscape Design's Yelp page.

Though now deleted, local broadcaster 11 Alive aired a screenshot of the Yelp reply left by DiNenno.

"Yes, this is an accurate description of what happened ... When doing a large landscaping project ... over several months ... I can't do that, all while going along with the delusion of two men calling themselves a married couple. It's very perverse and foolish," DiNenno's July 26 comment read.

Since then, the landscape design company's Yelp page has been flooded with hundreds of reviews left by people denouncing DiNenno's discrimination, many calling him a bigot.

An investigative report by 11 Alive captured screenshots of now deleted posts on DiNenno's public Facebook page that read, "I average about one or two calls per year from sodomites or lesbians. I always turn them down."

For Southworth, the experience was surreal.

"I felt like it was back in time," he said. "It opened my eyes to how prevalent discrimination is."

Although DiNenno's Yelp page now touts a one-star review, on average, his actions are not illegal in Georgia. The Southern state is among 26 in the country that have no explicit prohibitions for discrimination based on sexual orientation or gender identity.

Jeff Graham, executive director of Georgia Equality, an LGBT civil rights organization, said not only does the Peach State have no non-discrimination laws in place for the LGBT community, but for any persons.

"Georgia is on an even smaller list that has no state non-discrimination or civil rights laws at all. There's nothing to amend, it needs to be created from scratch," Graham said.

A GLAAD study "Accelerating Acceptance 2018," states that the number of LGBT people who reported discrimination or harassment due to their sexual orientation or gender identity increased nationwide from 44 to 55 percent in 2017.

This is also true in Georgia, Graham said, adding that while Southworth's experience was an extreme case, discrimination is a problem.

"This is certainly a really horrible situation," he said. "It really shows the dangers of using faith as an excuse to discriminate against someone. There are so many high profile cases that usually involve a marriage ceremony or weddings, but landscaping, this is a basic service that a lot of people access."

Southworth has found a new landscape company and plans are being finalized this week for his yard. DiNenno did not return calls to the B.A.R. seeking comment.

"The fact of the matter is that I am not at all surprised he would stoop this low," Morrison said in an interview with the B.A.R. "[Schneider's] voting record historically has showed he has never stood up for LGBT candidates."

Schneider was one of only two Illinois commissioners in 2016 to vote against signing a resolution by the Cook County Board of Commissioners that condemned North Carolina's House Bill 2, better known as the "bathroom bill," which barred transgender individuals from using the public restroom that matches their gender identity. (It has since been amended.)

"The depiction of me with a limp wrist, which everyone knows is a bigoted caricature of gay men, is appalling and shows nothing but an act of desperation by the chairman. He recognizes that we have momentum and are running a strong campaign. He is getting scared," Morrison added.

Morrison said this message couldn't be further from the truth. The first item listed on Morrison's campaign website that states his county platform issues says, "Fixing our broken property tax system. It is time to give the break to our hardworking families here in the Northwest suburbs."

When he has knocked on the doors of middle-class families in the suburbs, Morrison said one of the main topics he discussed is mitigating the issues associated with the property tax system.

The LGBTQ Victory Fund, a national organization dedicated to supporting LGBT officials at all levels of government, publicly denounced the mailer. The organization has endorsed Morrison.

"Let me be clear: Tim Schneider and his team knew exactly what they were doing when they altered a photo of Kevin Morrison to show him with a limp wrist and on his tiptoes," Annise Parker, a lesbian who's president and CEO of the Victory Fund and a former Houston mayor, said in a news release. "Schneider is taking a page from the playbook of his pal in the White House — engaging in the divisive and destructive politics that Donald Trump thrives on. For too long, openly LGBTQ candidates were defeated by opponents who appealed to homophobia in a desperate effort to win votes, but I am confident this attack ad will backfire on Schneider."

During his campaign, Morrison said he has been fortunate not to experience discrimination outside of this incident and that "running as a viable LGBT candidate in a historically Republican district with as much support as we have had is a humbling experience."

Other platform points for the candidate include supporting small businesses, implementing a fair tax code for middle class families, and ensuring that the county's civil services remain adequately funded.

Schneider, who was elected to the Board of Commissioners in 2006, has "led the fight against increased taxes and spending, fiscal responsibility, and transparency in government," his campaign website states.

"It will feel great to stomp out such a negative voice come November 6," Morrison said.

Schneider did not return calls from the B.A.R. seeking comment.

According to the website, www.pronounsday.org, International Pronouns Day is an independent project. The executive board includes people from various universities and crisis centers.

"Referring to people by the pronouns they determine for themselves is basic to human dignity," the website states. "Being referred to by the wrong pronouns particularly affects transgender and gender nonconforming people. Together, we can transform society to celebrate people's multiple, intersecting identities."

Those who participate are asked to use the #PronounsDay hashtag, to post their own pronouns on social media, or invite members of the community to share resources and thoughts on social media about the importance of using people's correct pronouns.

The site also includes resources including how to promote the use of correct pronouns on business cards, and email signatures, and information surrounding why pronouns matter to people, and a trans student educational resource guide.

LGBTQ Update is a weekly online column addressing issues affecting the community. It runs on Tuesdays. Please submit comments or column ideas to Alex Madison at (415) 875-9986 or a.madison@ebar.com.