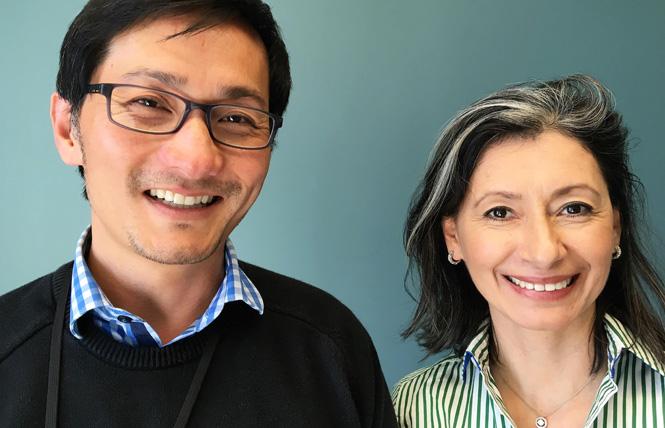 Lyon-Martin Health Services, a San Francisco nonprofit that offers primary medical care to women and transgender people, is now under new leadership after the resignation of Dr. Dawn Harbatkin, who served as executive director for four years and medical director for eight.

HealthRight 360, which took over Lyon-Martin in a 2015 merger, also announced that the Women's Community Clinic will join the 1735 Mission Street location that houses Lyon-Martin and Lee Woodward Counseling Center for Women, all part of HealthRight 360.

Do, a gay man, is the former chief medical officer at the San Francisco Community Health Center (formerly Asian and Pacific Islander Wellness Center). Sandoval has been serving Lyon-Martin mental health clients since November 2016, while Midanik-Blum has been with the Women's Community Clinic since January and previously came from Planned Parenthood.

Harbatkin, who started as medical director in June 2006, said she became increasingly interested in transitioning to assisted medicine after being with Lyon-Martin for 12 years.

"It's been a real honor to do this work and I am thankful the community has allowed me to do what I love for so many years," she said. "Very few people can say they love their job as much as I did."

Historically, Lyon-Martin has had few male leaders. In 2011, Eric Fimbres became the interim executive director for a short time before the HealthRight 360 merger. When asked about patients' reaction to having a male medical director and if it would deter some female patients from receiving care, Harbatkin said that should not be an issue.

"Our patients are our top priority and we have been very thoughtful about who our medical director would be and what they would mean to our patients," she said. "We looked at the experience, background, and skills the person would bring to the role, not their identity, religion, race, or gender."

Under Harbatkin, Lyon-Martin's services expanded significantly. As the Bay Area Reporter previously noted, according to Harbatkin, the number of patients that received care from Lyon-Martin doubled in her first year.

She also reconstructed care for transgender patients into a formal primary care program. In 2008, she partnered with Transgender Law Center to launch Project HEALTH (Harnessing Education, Advocacy, and Leadership for Transgender Health), an ongoing initiative that promotes trans health advocacy and educates other clinics and providers in trans care.

Do, who Harbatkin called, "the right person for the job," has a long history working with LGBT and underserved communities at San Francisco Community Health Center, which is open to everyone.

More than half - 59 percent - of Lyon-Martin's patients identify as transgender or genderqueer, while 76 percent identify as lesbian, bisexual, gay, or queer, according to its website. Do also spent 11 years with the Gay and Lesbian Medical Association, both as president and board chair.

"It's a real honor for me to join Lyon-Martin and the Women's Community Clinic," he said in a phone interview. "The work they have done for the past 40 years is incredible. Being able to carry that legacy on is a daunting task but one I hope to take to the next level."

Do said his goals as medical director are to maintain all services of the three clinics and to create a seamless experience for patients receiving care from any of the three providers, especially in a time when health care is changing. He also talked about the increasing need for mental health care services.

"This is a really important time for us as an organization," he said. "We don't know what will happen with the Affordable Care Act, but with the services these three organizations provide, we are able to help people navigate all the uncertainties about receiving care."

Lyon-Martin provides primary care to patients, regardless of their ability to pay. About 75 percent of Lyon-Martin's patient's report an income below 200 percent of the poverty line while 9 percent are homeless.

Both Do and Harbatkin said having all three clinics in the same location will allow for a more comprehensive health care experience to all patients. Before Lyon-Martin moved into the 1735 Mission location it offered care exclusively to women, lesbians, bisexuals, transgender, and genderqueer people, according to its website.

With the addition of the Women's Community Clinic, which was formerly located at 1822 Fillmore Street, patients have more services available to them in the multi-use health care center, which includes reproductive and sexual health services, primary care, mental health, and substance abuse treatment.

Salary information for the new leaders was not immediately available.

Alex Madison can be reached at a.madison@ebar.com.