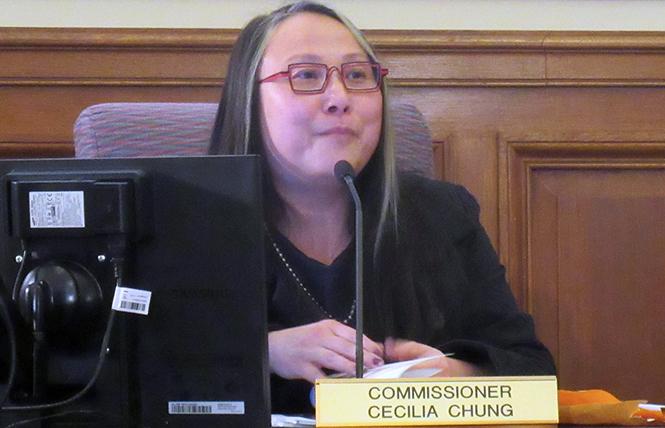 "This gives San Francisco the opportunity to lead again just like we did on syringe access programs," Commissioner Cecilia Chung, an HIV-positive trans woman, said after the vote. "We are not endorsing drugs, but we are letting the public know this is a sound public health decision."

San Francisco is home to an estimated 22,500 people who inject drugs, with around 180 overdose deaths annually. Safe injection sites offer a place to use drugs under the watch of medical staff, cutting the risk of overdose fatalities. They provide clean syringes and other injection equipment, preventing transmission of HIV and hepatitis B and C. They also reduce street-based drug use and improper syringe disposal and offer clients an entry point for seeking addiction treatment and medical care.

The resolution endorses the recommendations of the Safe Injection Services Task Force and supports the implementation of safe injection services in San Francisco. The task force report was previously presented at a Health Commission meeting in November, during which dozens of people who use drugs and public health advocates spoke in favor of safe injection sites.

The matter does not need to go before the Board of Supervisors.

Tuesday's meeting was also well attended, with most of the speakers using their public comment time to thank the commissioners in advance for their support of the resolution.

"Thank you for your bravery and your willingness to care about the health of drug users in the city of San Francisco," said Holly Bradford of the San Francisco Drug Users Union.

This week's resolution is the outcome of years of work by people who use drugs and harm reduction advocates. During that time, opposition has softened in the face of a growing overdose epidemic and public concern over street drug use and discarded needles.

"This took a lot of hard work and partnership with the community," Eileen Loughran of the DPH's Community Health Equity and Promotion branch told the Bay Area Reporter. "The health department looks at this as another tool to meet the needs of people who use drugs. San Francisco has always been a leader and has always worked collaboratively with the community."

The resolution also puts the commission on record in support of Assembly Bill 186, the safe injection bill sponsored by lesbian Assemblywoman Susan Talamantes Eggman (D-Stockton) and co-authored by gay state Senator Scott Wiener (D-San Francisco). The bill, which would allow cities to authorize supervised injection facilities on a pilot basis, fell just short of passing last September and will be reconsidered this year.

But San Francisco does not intend to wait for state law to change. The first two supervised injection sites could open as soon as July 1, lesbian Health Director Barbara Garcia told the San Francisco Chronicle.

San Francisco has a history of innovative public health approaches that challenge state and federal laws. In the late 1980s, activists started one of the country's first unsanctioned needle exchanges, distributing safe injection supplies from a baby carriage.

Task force member Laura Thomas of the Drug Policy Alliance suggested that a closer analogy would be medical cannabis, where the health department played a direct role in implementing an identification card system for patients and permits for dispensaries in contravention of state (at the time) and federal law.

San Francisco is one of several cities vying to open the first U.S. supervised injection facility, along with Baltimore, Denver, New York City, and Seattle. Last month Philadelphia city officials announced that they would work with community-based organizations to operate safe injection facilities, though they did not specify an opening date.

The location of the first San Francisco facilities has not yet been determined - or at least has not yet been publicly disclosed. Garcia said she is talking with community-based organizations that already provide syringe access and other services for drug users - such as the San Francisco AIDS Foundation's Sixth Street Harm Reduction Center - about adding supervised injection services.

"This is a happy day for me to see us moving forward," task force member Michael Discepola, director of behavioral health services at SFAF, said at the meeting. "The bottom line of this is about a message to drug users that their lives matter."