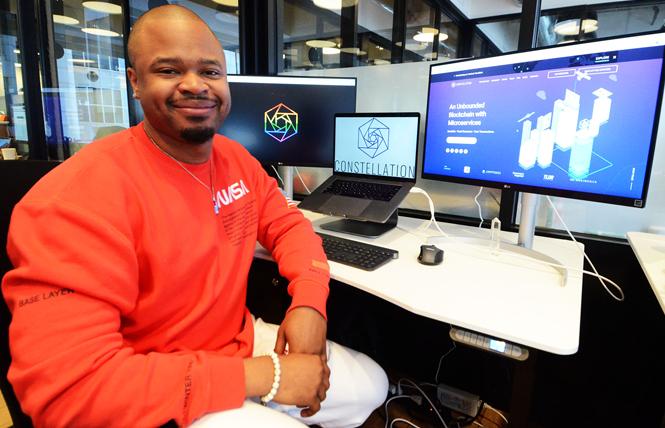 Altif Brown, a co-founder and head of community at Constellation Labs, can count on one hand the number of other African-Americans he knows working in the blockchain sector. He has yet to meet another gay person.

"In the blockchain community, people are very surprised to meet a black founder of a company. I have met zero gay founders and only three black founders that I know of," said Brown in a recent interview with the Bay Area Reporter. "They may exist, but if I have to search for them that in and of itself is a problem."

He and three others, all straight men, launched Constellation in November last year and have since grown the company to 25 employees. It offers its own cryptocurrency called DAG, short for directed acyclic graph, and is building a new model for distributing the online currency.

"What we are doing is not technically a blockchain. It is part of a broader umbrella," said Brown.

For instance, the better-known bitcoin stacks transactions vertically atop one another in a chain, creating a large ledger that must be housed on various devices and takes an immense amount of energy to run. Constellation scales up horizontally with each transaction, thus diminishing the amount of space and energy required to run its blockchain.

"We are taking principles from a distribution company to apply it to the blockchain infrastructure in order to simplify the running of the chain and the energy it needs," explained Brown. "It allows transactions to freely flow through the network without having everyone agree on it first. The ledger is updated by spreading it between people - it is called gossiping - and because of that we can scale up the network."

Constellation is able to run on mobile phones and other Internet of Things devices, and people who agree to dedicate space on their devices are rewarded in DAG. It is currently in beta testing and plans to launch to the public in late 2019 or early 2020.

Despite constant headlines about the eminent collapse of cryptocurrencies, Brown insisted the digital coins aren't going to disappear. He noted that it's been a decade since bitcoin was unveiled and, compared to some other countries' currencies, is more stable of an investment.

"The genie is out of the bottle," he said. "The space is maturing rapidly."

Emphasizing that he cannot give financial advice, Brown recommended that people do their own research before investing in a cryptocurrency. Similar to how they should investigate companies they buy stock in, so should people learn about the various digital coins on sale.

"A lot of people think it means investing in fake money. But when you ask them about how the dollar gets value, they have no answer," he said. "I do think they should explore it more and not be afraid to dive into it."

Brown, 28, grew up in San Francisco and was a competitive hip-hop dancer for 15 years. After graduating from UC Santa Barbara with a Bachelor of Science in philosophy, he went to work for a number of startups and eventually burned out. He contemplated moving to Atlanta to pursue a career in dance before a friend approached him about going into business together.

Working in the technology sector, Brown is cognizant of the controversies swirling around his profession, particularly the complaints it is a driving force behind the gentrification of San Francisco's historically black Bayview district and the de-gaying of the Castro district. In June, ahead of Pride, stickers posted around town declared "Queers Hate Techies."

Personally unfazed by the slogan, Brown said he is more troubled by its simplification of the issue.

"It seems so blatantly wrong of a statement because it is so resolute. Yeah, some queers hate some techies, and vice versa, but it is creating more friction than there needs to be," said Brown. "The broader discussion that is needed is how is tech impacting the Castro neighborhood. Those concerns are real."

He regularly speaks to high school students around the Bay Area, with a special focus on addressing black students, to encourage them to pursue a career in the tech sector. Due to the lack of diversity among blockchain executives, Brown has attracted media attention and recently began working with a public relations professional.

"I think somebody has to be, I guess, the black face of blockchain," said Brown. "In order to create a generation of black men or black gay men to be like, 'Oh, I can do that also,' then that is what I will be."

He acknowledged his own company is not as diverse as he would prefer, something he is committed to addressing.

"We grew very quick, so now we can focus on recruiting in a diverse way. We are always hiring," he said.

The press attention he receives has its drawbacks, Brown said. One profile dubbed Brown, whose estimated net worth is $1 million, "a self-made, multi-millionaire millennial? - a millennionaire." Apart from the portmanteau making him cringe, Brown took issue with the inclusion of the term "self-made" as he had strong support from his mother growing up and a grandfather who was one of the first black aerospace machinists in Silicon Valley. (Brown had a falling out with his father when he came out as gay; they remain distant to this day.)

"I didn't get into this incredibly hectic industry for money, and that still rings true. Of course, there is incredible wealth that can be had, but that is true of dedicating yourself to anything you love. In my case it is committing myself to revolutionary technology that is underpinned by philosophical ethos," Brown explained in a follow up email.

A Golden State Warriors fan, Brown isn't planning to buy season tickets when the basketball team moves into its new arena along San Francisco's waterfront. But he does hope to check out a game with friends when work allows.

To learn more about Constellation Labs, visit its website at https://www.constellationlabs.io/.