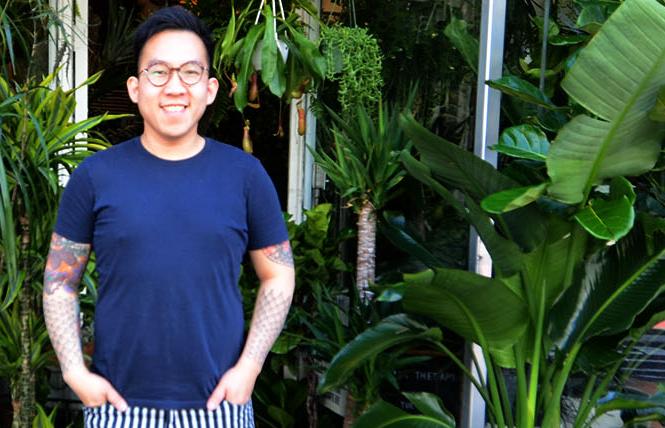 Growing up in Redding in northern California, Chai Saechao loved to get his hands dirty in the backyard garden his mother tended.

"I was always outside with my mom gardening," recalled Saechao, 29, who moved to San Francisco eight years ago.

This summer he turned his interest in horticulture into a new business pursuit. With the help of his partner of two years, Anthony Stapor, 29, Saechao last month opened Plant Therapy at 687 O'Farrell Street, one block from the couple's studio apartment.

Like their home, which is crammed with scores of plants, the 375 square foot storefront is overflowing with different varieties of succulents, fig trees, calatheas, and other plants particularly suited for urban settings. They range in price from $4 up to $90, with the majority costing between $12 and $22.

Most of the plants Saechao carries require low light, once-a-week watering, and are pet-friendly.

"A lot of people in the Tenderloin don't have a lot of light in their apartments," he noted.

Having lived mostly in the neighborhood while in the city, apart from a short stint in the Richmond district, Saechao has learned by trial and error with his own houseplants which ones tend to do better in the Tenderloin's apartment buildings and how best to care for them.

"I didn't go to school for botany or anything. I bought plants, killed them, learned how to care for them," said Saechao, who educated himself by reading different books about plants.

As the name of his store suggests, Saechao believes caring for plants has therapeutic benefits for people.

"I think of gardening as a Zen thing. For me, it is about relaxation," he explained. "I love coming home to my little jungle, tending to my plants with a glass of wine. It is great to come to work everyday and basically do the same thing."

A decade ago Saechao was hired part-time by the coffee company Starbucks and quickly advanced through the ranks to become a store manager. In 2011, he was assigned to the location in the heart of the city's gay Castro district and managed it for three years.

As his 10th anniversary with the company approached, he began to ponder what his next career move would be. One night last year, while talking with Stapor about what he should do next, his partner asked him what made him happy.

"Looking around the apartment, he said it was very obvious what you want to do," recalled Saechao.

Without any concrete plans or a signed lease, Saechao put in his two weeks notice and set out to launch his own business. For two years he had walked by the vacant storefront near his house and thought it was a perfect location for a locally owned store.

"In San Francisco getting a commercial space I didn't know was such a big ordeal," admitted Saechao. "It was very scary every month not knowing if I would get the space or not. Luckily everything worked out. They were very excited to have me as a tenant."

He signed a five-year lease for the space, with an option to renew. It is near the corner of Hyde and O'Farrell at a bus stop for the busy 38-Geary line.

The neighborhood has long been a haven for newly arrived immigrants and LGBT people, especially transgender individuals. It also is a magnet for homeless individuals attracted to the numerous social service agencies located there.

On certain corners, drug dealing is rampant. Yet, Saechao said he has never had an issue living there and had no qualms about opening a business in the area.

"I just see people as they are. As long as you respect people and not treat people like trash, they will respect you back," he said.

He has tailored his business to meet the needs of urban dwellers. For a $12 fee, he will repot plants for customers "who don't want to get their hands or apartment dirty."

And when Stapor is not working as a server at the restaurant Cassava, he will load up the couple's Toyota Corolla and deliver plants anywhere in the city for a charge of $15.

Saechao also makes home visits to assess what kinds of plants are most suitable for a client's location. The $50 consultation fee can be put toward the purchase of plants from his store.

Since opening his doors August 1, Saechao has felt embraced by the neighborhood, with longtime residents as well as college students returning for classes popping in. There are few places nearby to buy houseplants, he noted.

Gay couple refreshes Castro knob store
The new owners of Castro cabinet hardware supplier Bauerware are working to refresh the space and turn it into more of a showroom for local interior designers and homeowners working on DIY projects.

Located at 3886 17th Street for 20 years, the store was started by San Francisco-based kitchen and bath designer Lou Ann Bauer. It quickly drew a loyal fan base for its quirky selection of knobs and decorative hardware made by artisans and crafts people.

Last year, Bauer put the store up for sale, and in February husbands Jon Knott and Ray Smith closed on purchasing the business. Together 26 years, the couple relocated to the city from London 17 years ago, with Knott working in property management.

Smith now manages the store, and Knott assists in its operation. They have been slowly remodeling the space with displays showcasing a selection of hardware from certain brands, with a full makeover slated to debut in the spring.

"We are expanding, if anything, our brands we carry," said Knott. "We are dedicated to keeping that store going."

The name is staying the same, and the store's icon will remain that of a gator. The animal has been a visible symbol for the store since it opened.

"The gator has changed in form," explained Knott, adding that, "We are putting the gator front and center in the window."

While many of the more unique knobs the store is known for, such as the heads of animals or insects, are no longer in stock or as in demand as they once were, Bauerware intends to maintain a selection of more fanciful hardware, Knott promised.

Bauerware is open Tuesdays through Saturdays from 10 a.m. to 6 p.m. To learn more about the store, visit its website at https://www.bauerwaresf.com/.

Honor Roll
For the first time the National Association of Gay and Lesbian Real Estate Professionals, known as NAGLREP, has released a LGBT+ Top Agent List. According to the group, it marks the first time that LGBT and allied real estate sales professionals have been recognized in such a manner.

Landing in the number two spot on the list for individual sales volume was gay Berkeley-based real estate agent Herman Chan with $62 million in sales. He was roughly $8 million short of the number one seller on the list.

Chan, who is with Golden Gate Sotheby's International Realty, also came in at number 12 on the list for most transactions, known as sides, at 61.

The 11-year-old NAGLREP has more than 2,000 members and is one of the largest LGBT trade organizations in the nation.