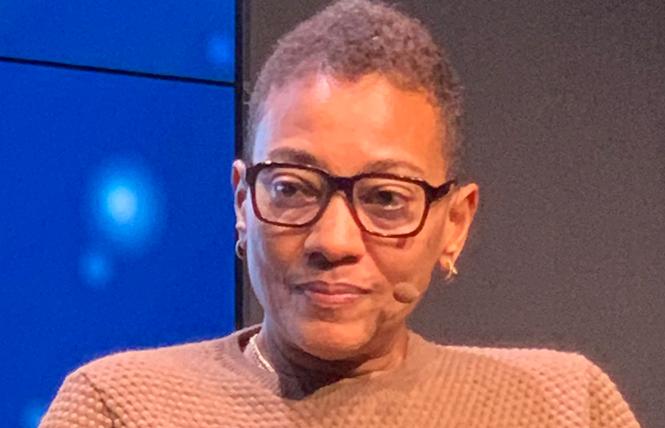 Robyn Crawford talked about her friendship with the late Whitney Houston during a stop in San Francisco to promote her memoir. Photo: Sari Staver

Robyn Crawford, longtime friend, personal assistant, and onetime lover of the late pop singer Whitney Houston, finally tells all in her new memoir about the relationship the two women had after meeting as teenagers in New Jersey.

Although fans suspected the two were romantically involved, the nature of their relationship was never discussed in public, until late last year, when Dutton published Crawford's celebrity tell-all book, "A Song for You: My Life with Whitney Houston."

The simple answer is yes, the two began a romantic relationship almost immediately, consummated but, according to the book, their life in the bedroom ended quickly.

So if readers are hoping for a book filled with tidbits about lesbian sex, look elsewhere. But the book does have tales of love and devotion.

Last month, as part of her national book tour, Crawford, 59, stopped in San Francisco where she told a rapt audience at the Commonwealth Club how her life with Houston came about and how it's been since the two dissolved their business relationship in 2000, 12 years before Houston died February 11, 2012 of accidental drowning and the effects of heart disease and cocaine in her Los Angeles hotel room. Houston was 48.

Crawford and Houston met in 1980 when both women were camp counselors at a community center in East Orange, New Jersey. They became best friends — and practically inseparable — almost immediately, a friendship that would last two decades, ending after the singer's drug use and her turbulent marriage to R&B star Bobby Brown drove them apart.

The pair moved in together as soon as they could, according to Crawford. Their sexual relationship was short lived, with Houston giving her friend a Bible, explaining that people would "never leave us alone" if word got out. But the two remained close friends, living and traveling together. Crawford was Houston's assistant, gatekeeper, and scheduler so the celebrity could focus on recording and performing.

According to Crawford, the women both experimented with pot as teenagers, moving on to cocaine, but vowed to quit before Houston "got famous." Crawford quit but Houston didn't, with the singer's drug use spiraling so out of control that Crawford pulled together an intervention of friends and family, a tactic that didn't succeed.

Crawford's relationship with Houston's family was rocky, she conceded, each viewing the other as an opportunist ready to raid the singer's bank account. Complicating the situation was the fact that Houston's brother was also her drug dealer for a period, Crawford explained.

Once Houston got together with Brown, the once glamorous singer went into a steady decline of no-shows. Brown abused Houston physically and emotionally, according to the book.

When Houston told her husband that she and Crawford had had a brief romantic relationship, Brown's objections to her ex-lover became more vocal. Crawford said the two "grew apart," with Crawford finally deciding that the arguments she was having with the couple were getting increasingly frequent and bitter.

When Crawford left Houston's employ, "I started over," she explained.

Crawford's life blossomed while Houston's circumstances continued to deteriorate. "I helped her for as long as I could and after that, I realized I had to help myself," she said.

Crawford moved to Los Angeles for a year, managing a band while she tried to figure out "what would be next," she said. "I never intended to settle in California but I wanted to give Robyn a new life."

After moving back to New Jersey, Crawford began dating a longtime friend, Lisa Hintelmann. The couple moved in together in suburban New Jersey, with Crawford launching a career as a personal trainer, working one-on-one with clients.

In 2009, after adopting two children, Crawford said she rebranded herself as the family's primary caretaker while her spouse worked as a publishing executive.

Asked about the contrast of traveling first class around the world to a stay-at-home mom of two, Crawford said, "Yes, I've had two very different lives. But a lot of what I learned from my years with Whitney" have helped her to keep the family's schedule working smoothly, she said.

"We're a solid couple and a solid family," said Crawford.

"While Houston's life ended tragically, I hope people will remember the talent" and joy she brought into people's lives when she sang. That's the part I try to remember, too."