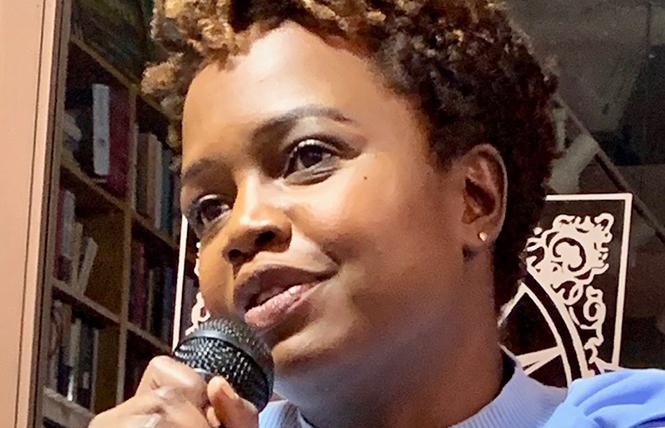 She works full-time as chief public affairs officer for the progressive public policy advocacy group MoveOn.org, is under contract to MSNBC as a political analyst, and teaches political campaign management at Columbia University, so it's not surprising that the usually smiling and cheerful Karine Jean-Pierre seems a bit annoyed that her publisher sent her on a 10-day cross-country road trip to promote her new book, "Moving Forward: A Story of Hope, Hard Work, and the Promise of America" published by Hanover Square Press this month.

Sitting down for an interview just before her speaking engagement at a stop at Book Passage in San Francisco November 13, Jean-Pierre, a lesbian, explained that she has always had a "very, very busy" life. She added, "Well, it does seem to be crazier than ever now."

Jean-Pierre said the long hours are nothing new for her. When she worked at the White House as President Barack Obama's regional political director for the White House Office of Political Affairs during his first term, 12- to 15-hour days were the norm, she explained.

"So, I'm used to this pace," she said. And at that job, her boss would sometimes email her at home at 1 a.m. "and expect an immediate answer."

In addition to her three professional gigs, Jean-Pierre is raising a 5-year-old daughter, Soleil, with her partner, CNN national correspondent Suzanne Malveaux. Today, family life is particularly hectic, said Jean-Pierre. While she is on the road, Malvaeux covered the impeachment inquiry hearings. A full-time nanny helps out at their home in suburban Washington, D.C., she said.

Jean-Pierre, 42, had just flown in from Phoenix. But she was clearly pumped up about the new book and enjoyed taking selfies with autograph seekers.

The book, she said, is "a memoir and a call to action," telling her life story as well as explaining how people can "access politics, no matter what their economic status, age, education or background."

She looked back on her life as a first generation Haitian American and concluded that if she could break through the many barriers she faced going into politics, others could too.

"Getting involved in politics can be intimidating," she said. "But in today's political climate, the need for all of us to participate has never been more crucial."

The book, she explained, "is a call to arms."

Didn't expect politics
Jean-Pierre never expected to enter politics. When her family moved to the U.S., Jean-Pierre was 5 years old and "an awkward, shy Catholic school student" in the Haitian community in Queens Village in New York City.

"The teachers worried about my shyness," she said.

But she blossomed as a teenager and after rejecting her family's dream that she become a doctor, Jean-Pierre dipped her toe in the political water by getting involved with environmental policy, eventually landing at Columbia University's School of International and Public Affairs.

After obtaining her master's degree, Jean-Pierre held a series of jobs, beginning as an aide to a New York City councilman and later as a paid staff during John Edwards' 2008 presidential bid before moving over to the Obama campaign and subsequently to the White House. Later, she served as deputy campaign manager for Martin O'Malley's 2016 presidential campaign before joining MoveOn.org.

While being a lesbian has not stymied her activism or career (as far as she knows), she said that her sexual orientation caused problems with her conservative immigrant family.

"I've always been out, at least to myself," she said. But at age 16, when the teenager told her mother she was gay, the news was not well received. So "I went into the closet" for a few years, she said, until she got her own apartment during college.

Talk show appearances are nothing new for Jean-Pierre. A year ago, after a number of appearances on MSNBC, she was offered a contract to appear exclusively on the network, although she has been allowed to promote her book on competing networks.

Jean-Pierre said that her "call to action is timely."

"Donald Trump, Mike Pence, and the Republican Party are tearing down the safeguards for vulnerable people," she said, referring to the president and vice president. "I wrote this book to tell my story, which I hope will encourage others to find a way to participate" in the political process, particularly people who feel they may not have the right background or opportunities.

There are many roads as an activist, she said, including "taking to the streets" to protest, contacting elected representatives, and of course, voting.

Activism can also lead to burnout, she conceded.

"Sometimes we all need a break," she said, urging people to "turn off the TV" when the news becomes too depressing or overwhelming.

Despite the grim scenario in Washington, D.C. today, Jean-Pierre said that she is optimistic about the future. In the upcoming 2020 presidential primary, Democrats will have "the biggest and most diverse field of candidates in modern American history," she noted.

"We are the ones who will decide the Democratic Party's future," she said. "It's important that we all pitch in and help candidates win in local, state, and federal elections.

"That requires the mobilized support of an activist base ... the sort of base we're seeing right now across the country," she said.

This year, as always, MoveOn will poll its members to come up with an endorsement for president, she said.

"Don't wait" to get involved, said Jean-Pierre. "Right now we are witnessing a historic sense of urgency" for change.

"I hope my book can harness this energy by offering a tool for people" to leave the sidelines to "jump in and help out," she added. "Together we can create positive change."