Lesbian author brings a smile to her atheism 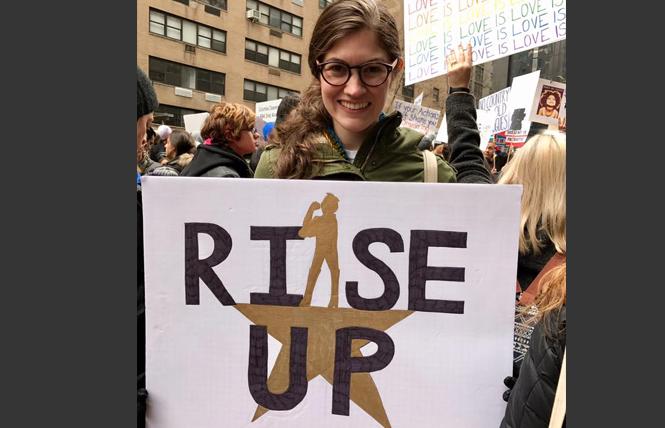 Perhaps the best way to characterize Camille Beredjick is atheism with a smile.

A writer, blogger, and nonprofit digital media strategist, she has been writing about LGBTQ issues for Hemant Mehta's website Friendly Atheist for years. Recently, she has written a self-published book, "Queer Disbelief: Why LGBTQ Equality Is an Atheist Issue," available on Amazon.

In the book Beredjick acknowledges the unprecedented progress LGBTQ people have made in the past decade, but recognizes they have a ways to go before achieving true equality, especially politically. Not surprisingly, she attributes the main roadblock as being conservative religious interests. She believes atheists could help LGBTQ people in their fight for equal rights. Beredjick, who identifies as a lesbian, was interviewed by the Bay Area Reporter via email.

She wrote in her email that she was inspired to write the book because she and Mehta "saw patterns emerging in the relationship between LGBTQ people and atheists, particularly around social and political activism and allyship."

"Add to that the major political issues of the moment around LGBTQ rights and the attempted influence on our government by fundamentalist religion, and we decided the time was right to explore these issues in a book, especially because stories about active collaborations between these two groups were sparse," she wrote.

Beredjick, 27, firmly believes that any abuse of religious freedom, particularly at the expense of a marginalized group, is an atheist issue. In her book, she examines the ways atheists and LGBTQ people are natural allies, "the ways these groups can learn from, and support, one another; the reasons atheists have a responsibility to support human rights issues like LGBTQ equality; and most importantly, why it's crucial that we do so without delay or hesitation."

Beredjick is adamant in spreading the news that atheists are every bit as friendly as religious folk.

"There's a misconception that atheists are cold or uncaring compared to people of faith, and that's wholly untrue," she wrote. "Part of it is based on the assumption that 'good values' stem only from religious belief, but atheists and agnostics have convictions and morals, too — morals they have considered and decided on for themselves, rather than abiding by a pre-determined religious code."

She also dismissed the stereotype of the "militant atheist" who seeks to "convert" everyone around them to atheism.

"That may be a goal for some people from practically all religions (we're all familiar with proselytizing Christians), but personally, I don't care what higher power you believe in as long as you don't use that belief as a vehicle for hatred and harm," she wrote.

Beredjick said that she did not grow up in a Christian home.

"My mother is Catholic and my father is Jewish, but neither of my parents were very religious or pushed me to adopt their beliefs," she wrote. "Claiming my identity as an atheist did not change anything about my regular routine or my family relationships; it was merely a way to name how neither religious practice nor belief in a higher power had ever been part of my life, and I did not see them as important moving forward."

She doesn't see atheism as a belief system, but the absence of one.

"The absence of belief isn't the same as the absence of empathy, morality, community, or any of the other things people often get from their faith," Beredjick wrote. "In fact, for plenty of atheists, not believing in a god makes us more strongly connected to ideas of justice and morality. We're not accountable to a higher power, but to ourselves and our surroundings."

Beredjick noted in her book that according to a 2017 Public Religion Research Institute report on religious trends, LGBTQ people are less religious and more likely to be atheists than the general population, with 46 percent of LGBTQ people having no religious affiliation compared with 24 percent of the general U.S. population. The report was based on a sample of more than 101,000 Americans from all 50 states.

Another interesting statistic from that same report is that nearly one-third of people who left their childhood religion cited "negative religious teachings about or treatment of gay and lesbian people" as one of their reasons for doing so, thus providing further evidence how heterosexuals have started to care more about LGBTQ issues over time.

For Beredjick, the common intersection between atheism and LGBTQ equality is "that both groups are frequently the targets of faith-based discrimination in this country, be it over the right to marry or have children or the privileging of some belief systems over others."

"That said, I want to be careful not to create a false equivalence between the two; LGBTQ people have faced far more enshrined discrimination and bigotry than atheists," she wrote.

Beredjick pointed out that laws targeting LGBTQ people — such as businesses being able to discriminate against LGBTQ customers due to their religious beliefs or religious schools being able arbitrarily to fire LGBTQ employees — can also be used against atheists.

"Yet, even if LGBTQ people and atheists don't experience the world in the exact same way, we have comparable goals — as movements and as people — and face some of the same challenges," Beredjick wrote. "We want to go to work knowing we won't get fired for our beliefs. We want to feel safe walking down the street. We want to build families and friendships and relationships however we damn well please. And too often, we're pushed down by people whose beliefs don't match ours, people who think we're broken and sick, and people who just don't get us."

"There are atheists who were raised in strict religious homes and had experiences that caused them to separate from religion, whereas others never believed in a god at all," she wrote.

Beredjick is not anti-religious per se.

"Religion (or the absence of it) is a deeply personal experience," she wrote. "As long as they aren't hurting anyone, I respect and support everyone's right to believe however they choose. However, there are those who claim they're OK with gay people existing, but who don't want to give them any rights that might conflict with their own faith. You often hear this excuse from socially conservative politicians, who might proclaim their tolerance in the same breath as they announce sweeping anti-LGBTQ legislation.

"No matter your beliefs (or non-beliefs) it's still not 'moral' to hate LGBTQ people quietly, condemning their existence internally while being considerate and respectful to their faces," she added. "That's sort of like when Christians say that it's OK to be gay, as long as you don't act on that gayness. The reason that argument fails is because you're not any less gay if you abstain from gay sex. Telling someone that they can desire a consensual sexual relationship but can't actually have it does not count as acceptance."

She said that Pope Francis' famous comment about gays, "Who am I to judge?" falls into that category because he "still presumably accepts Catholic doctrine on matters of homosexuality. Similarly, I don't feel strongly about the definition of atheism because I don't find it central to the question at hand. I am more concerned with whether we can practice empathy, kindness, and respect toward others, regardless of our individual beliefs about what it means to be an atheist. Though by and large, atheists skew liberal on social issues."

Beredjick is not opposed to partnering with religious progressives for advancing social issues.

"I write about this at length in the book — many of the religious progressives I interviewed said they had more in common with atheists than with fundamentalist Christians," she wrote in her email.

She's not opposed to LGBTQ religious people staying to work for change within their churches, synagogues, or mosques.

"It depends on the church and the community they've got surrounding them. Traditionally, people are more likely to be swayed by those they know and trust, like their fellow churchgoers, than by outsiders," she wrote. "It's a worthwhile goal to try to change hearts and minds that way, and sometimes it works. That said, some religious institutions are so rooted in hateful traditions that it's hard to imagine they'll ever change."

"Those risks affect atheists too, particularly as they relate to the privileging of Christian values over all others," she wrote. "This is also an important moment to honor the intersectionality of the LGBTQ rights movement. LGBTQ people are also people of color, immigrants, women, poor people, and others who are being targeted by this administration."

Because of President Donald Trump's embrace of his evangelical Christian base and targeting LGBTQ people, immigrants, and others, Beredjick wrote that communities should mobilize atheists (and others) to get angry and take action.

For Beredjick it all comes down to the power of stories to transform people and build empathy.

"Above all, I cannot say enough how important it is to listen to a person's story before passing judgment on them," she wrote. "Each of us comes to our beliefs after a wildly different set of experiences, relationships, and other forces that shape how we move through the world. Real change can happen when we recognize the value of embracing diverse perspectives and use it for good, as well as listen to authentic human stories about how religious beliefs can hurt people. ... Take the time to figure out how you can best make the world a little friendlier for the people around you, and all our communities will be better for it."