Queering the Schmear - Jewish Halloween's a delish drag at Oasis 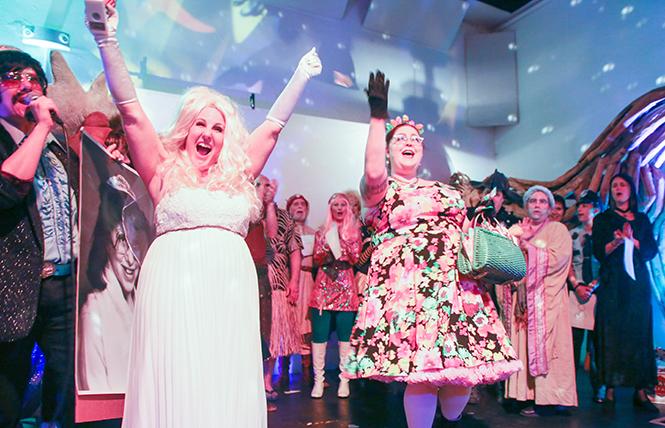 Costumes are encouraged on March 23, when Congregation Shaar Zahav, San Francisco's synagogue for LGBTQ Jews, families and friends, celebrates Purim, a joyous holiday which is Judaism's answer to Halloween. The congregation is throwing Gender Schmear, a great big Purim party at Oasis.

"Purim is a Jewish holiday that challenges traditional power structures, creating a topsy-turvy upside down and comical night," said Rabbi Mychal Copeland, a lesbian who serves as spiritual leader of Shaar Zahav. "Our ancient texts especially tell us that people should dress as a different gender than their own on this holiday if it brings them joy so we hope that Gender Schmear encourages us to always find our bliss." 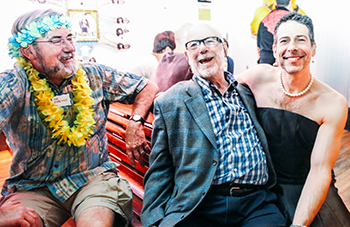 "Purim is a holiday where you're celebrating a period of transition," added Heidy Ramirez, Engagement Director for Shaar Zahav. "People dress in costumes and drink, and so for us, being an LGBTQ synagogue, this holiday is an important one because it allows you to be yourself and have a good time."

Ramirez noted that dressing in drag is encouraged as part of the festivities. There will be a DJ spinning tunes on the dance floor, and the first 100 people who arrive at the party will be given Hamentashen, a traditional Purim pastry. Since alcohol is served, attendees must be over 21.

Lady SinAGaga, a Jewish drag queen from New York City, will be providing the evening's entertainment.

"The story of Purim is about an old, grumpy leader of a country who took over and made a small majority of people disenfranchised," Lady SinAGaga said. "It's actually quite relatable to today. Through the ingenuity of the sages and a little Jewish wit, we took control of the situation and turned things around."

Lady SinAGaga might know a little bit about being disenfranchised. In her pre-drag life she was an Orthodox Jew. It was quite a journey, she said, not only telling her family that she was gay, but also that she was doing drag. It took awhile, but eventually they came around and accepted her choices. Her father even came out to watch her compete in a pageant, sitting in the front row. SinAGaga said that she's no longer Orthodox, but considers herself spiritually and culturally Jewish and yes, occasionally she still pops in at her local synagogue. 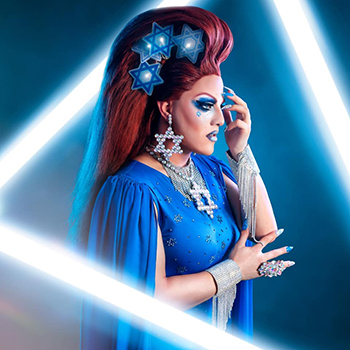 Lady SinAGaga will perform at this year's Gender Schmear Purim party at Oasis.

"I guess I'm just incredibly witty," she said, when asked how she came up with her name. "I was with friends and we were talking about Jewish drag names. This was before I actually started doing drag, and the name just came up. I wish I could remember who said it. I remember thinking that this name is mine and I will do drag just because that name is so amazing. I always joke that my name is the best thing that I've ever done in drag. After that it's all gone downhill."

SinAGaga recalls a childhood in which she dreamed of performing, a life choice which is frowned upon in Orthodox communities.

"So when I came out and I saw drag queens for the first time I was first a little scared, but then I remember thinking that I could do this," she said. "I'm a controlling person, I love doing everything. Seeing that they were producing, directing, acting, sewing and doing hair and make-up, I thought, 'I can be in charge of everything, I got this.'"

She's often surprised, and thrilled, when young Jewish boys message her to tell her how wonderful they think it is that she's so visibly gay and Jewish and feels that, in the current political climate, it's important to be as visibly yourself as you can be.

"Every day is Purim for me," she said. "But in Yeshiva (Jewish religious school), I studied a million reasons why we dress up in costumes for Purim. Basically, there was a lot of deception in the Purim story, a lot of doing what needed to be done to get the job done. A lot of it had to do with the changing of one's outward appearance. There were a variety of different storylines that followed that train of thought, so in order to commemorate that we change the way we look for a day."

SinAGaga promises that her Gender Schmear Purim show will be glamorous, pomp, and relevant.

"It'll be a classically great drag show, maybe with a little bit of a twist," she said.

The book of Daniel: an interview with gay writer Daniel M. Jaffe
Sign up!