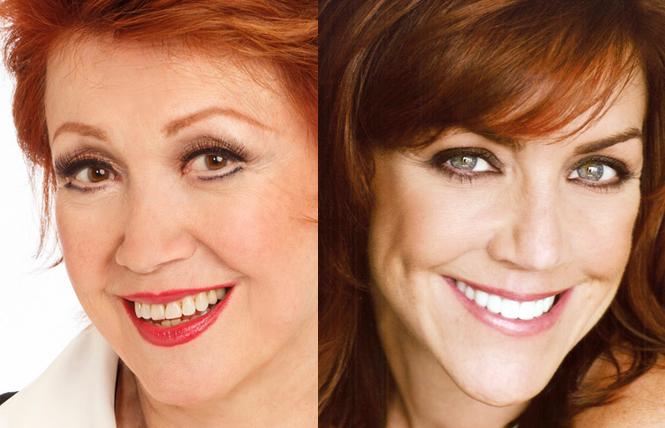 On January 18 and 19 Broadway legends Donna McKechnie and Andrea McArdle will reunite for an evening of song at Feinstein's at The Nikko. The two performers, who worked together in a production of the classic musical State Fair, will pay tribute to two songwriting giants: Stephen Sondheim and the late Marvin Hamlisch.

The show, simply titled Andrea McArdle and Donna McKechnie Celebrate Sondheim and Hamlisch, is one they've already done at 54 Below in New York.

McKechnie has long been one of the theater's most recognizable entertainers. She's been onstage since the late 1960s, playing major roles in shows such as Promises! Promises! and Company, a Tony Award-winning show with music and lyrics by Sondheim. 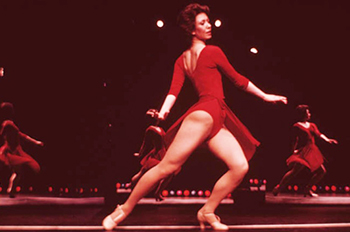 McKechnie's status as a theater great was established during the mid-1970s, when she wowed audiences with her stunning rendition of the song and dance number "The Music And The Mirror," a song with music by Hamlisch, in the backstage musical A Chorus Line.

Now considered one of the greatest shows in the history of Broadway, A Chorus Line won nine Tony Awards and the Pulitzer Prize for drama. McKechnie is also fondly remembered for her role on the 1960s/early 70s TV series Dark Shadows.

McArdle started out as a child actress, spending several years on the daytime drama Search For Tomorrow. She left that show in 1977 to star in Annie on Broadway, bringing down the house every night with her show-stopping performance of the song "Tomorrow."

Her work in Annie garnered her a Tony Award nomination, and at the time she was the youngest nominee in history. She also played a teen-aged Judy Garland in the 1978 TV movie Rainbow. For the next forty years McArdle has worked extensively on Broadway and in cabaret, and has toured with McKechnie, Maureen McGovern and Faith Prince in the concert event 4 Girls 4. 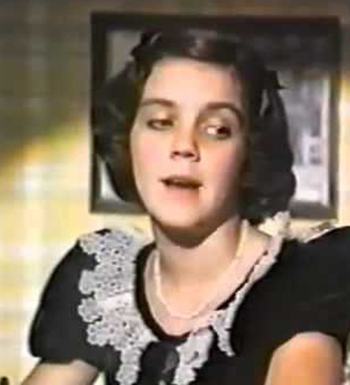 "We have the same manager," McKechnie said of McArdle, speaking to the Bay Area Reporter from her home in New York City. "We worked together in 4 Girls 4, and in State Fair, so we have a history together. She's younger than I am, but she's old school like me; when you did musicals without mikes and had to sing out."

McKechnie added that she was very happy with the new show's song selection.

"One of the fun things is learning songs we didn't know existed," she said. "We especially like to do the songs that are our favorites, songs that we did in regional theater or on Broadway."

The show is being directed by Marsha Milgram Dodge, who directed the revival of Ragtime

"We're thrilled to have someone with her level of expertise," McKechnie said. "Marsha told us to think of these songs as the soundtrack of our lives, and that's what it essentially is for me. That's how we made our choices. The journey isn't about the writers, but about our lives. When you think of these writers you want to talk about them," but Marsha said, 'Remember that the show is not about the writers, it's about your personal journey. It's about how you connect the songs to a certain time in your life.'"

For McKechnie, it's the songs of Hamlisch that touch her the most deeply.

"One of the most moving things for me is to do the songs by Marvin and going down the Chorus Line memory lane," she said. "That was Marvin's biggest show. Marvin was a highly entertaining and funny person. He left us with a beautiful legacy of music with the songs that he wrote. He had a very generous heart; it's apparent when you listen to his music. He loved to have fun and entertain people." 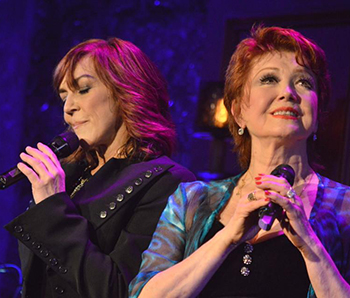 Andrea McArdle and Donna McKechnie at their recent 54 Below concert in New York City.

"Any actor you speak to loves to sing Sondheim because Sondheim is a good actor himself," she said. "He writes in the moment and in character. He embodies the whole character when he writes; everything fits like a glove. It's challenging but it's thrilling to do his work because it's so personal."

In addition to singing solo, McKechnie noted that the two women will also perform duets.

"We have fun with the duets," she said. "We do an updated version of 'Everybody Ought to Have a Maid' from the show A Funny Thing Happened On The Way To The Forum. We do it as two women on the road and sing, 'Everybody Out To Have A Worker Boy.'"
McArdle said that she's thrilled to be working with McKechnie.

"She's a living legend, and there aren't that many," she said. "I'm the luckiest girl in the world to be working with Donna McKechnie. I've become a better worker, a better performer, from working with Donna. I learn so much from her. I'm so lazy next to her. Her war stories are inspirational, and she's such a broad. I consider that to be a compliment. And to have her voice, she sounds better than she did in State Fair."

Like McKechnie, McArdle addressed the legacies of the two composers.

"I never got to be in a Hamlisch musical, but I was in inappropriate places when I was twelve, next to people like Johnny Carson, Ethel Merman, Bob Hope, and Dinah Shore. I would often turn to Hamlisch's musical legacy of lost love when I was twelve. I'm glad I get to sing his songs as an adult when I have the baggage of an adult. Hamlisch is always a go-to."

McArdle added that she's excited to be singing the music of Sondheim.

"I never got to be in a Sondheim show after forty-five years in the business," she said. "Fingers are crossed. He writes great songs for women in the business."

In spite of her early start on television, McArdle has primarily been a stage performer, and has since rarely gone before the camera.

She urges people to come see her show with McKechnie.

"If you want to see an evening to see at least ten Broadway shows, come and see us," she said. "When I hear Donna Sing 'At the Ballet' and 'The Music and The Mirror,' I feel like I have no power over them. You'll feel like you're getting the best songs of an era. We do songs like these in big Broadway houses but I feel as though they work better in small, intimate houses. Donna looks twenty-five years younger and sounds great. She's an inspiration."