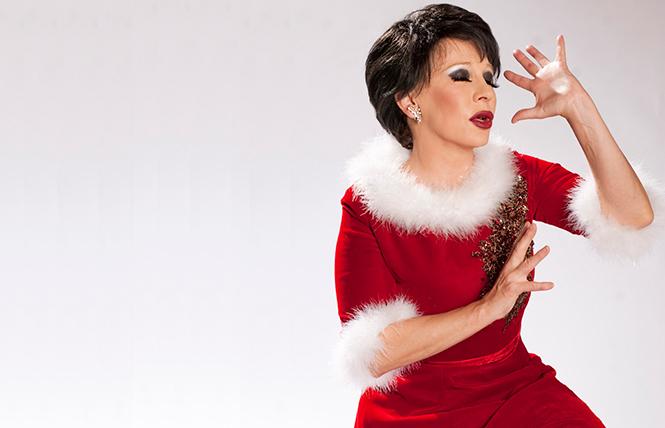 It's been a while, and it may be a while longer before Connie Champagne returns, but her subtle, witty and endearing portrayal of Judy Garland takes place to Oasis on December 15. In an interview with the Bay Area Reporter, Champagne talked about a variety of topics, musical trends and historic moments in culture that include the vocal icon.

Champagne first performed as Judy Garland in the local early 1990s hit drag comedy, Christmas With the Crawfords in San Francisco, and recently in a New York production in 2014.

In the first production, said Champagne, "Director Allen Sawyer called me as a replacement for another actor. My only character at the time was doing Vikki Carr for a New Year's Eve show. I said, 'I don't see myself as Judy.' Allen said, 'You're a transformational actor. You can do this.' We discussed me getting brown contact lenses. I called up [the late] Arturo Galster," then known for his Patsy Cline performances, "and he helped me out."

Champagne also performed in Philip R. Ford's 1992 stage adaptation of the book and film Valley of the Dolls as Neely O'Hara (Those Judy Garland connections should be either already known or researched by any gay fan of cinema camp). The show ran in North Beach for four months. 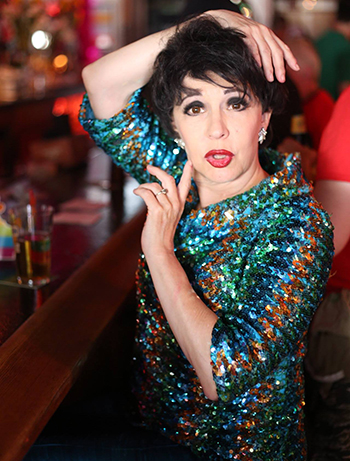 She credits that show's costar Miss X with inspiring her work, as well as the late Doris Fish, whom she met through Scrumbly Koldewyn, one of the original Cockettes. Champagne shared screen credit with Fish in Ford's wacky underground classic, Vegas in Space.
"If it hadn't been for them, I wouldn't be singing or having as much fun with it. They gave me the courage to do it."

Champagne also credits director F. Allen Sawyer and musician Joe Wicht for helping her develop her early Garland shows, which are notable for their subtlety and nuance, as opposed to high camp.

"I look at a character like her and find it uplifting and inspiring that she had such a great spirit," said Champagne. "But I avoid the Judy clichés that many performers have done."

Born and raised in Roseville, CA, Champagne's extensive early performing work as Kelly Brock (her birth name) included productions of Jesus Christ Superstar, singing with the bands Clocks of Paradise and Romeo Void, and getting an MFA from American Conservatory Theatre.

Her introduction to Koldewyn led to the formation of the neo-cabaret group Connie Champagne and her Tiny Bubbles. Her genre-busting cabaret style has since inspired many others. The signer-actor said she took inspiration from Charles Busch as well as other colleagues in the practice of becoming a character who's funny but realistic.

"I discovered a lot about the character of Judy through a sort of outside-in process, kind of the reverse of Method Acting. I've basically played her young, old, dead, over the rainbow, on psychedelics— but not me on psychedelics!"

Since then, Champagne has performed as Garland multiple times over the past three decades, at many different venues, including Feinstein's, The Plush Room, at Castro Theatre star tributes produced by Marc Huestis, and many other theatres. Her catalog of recordings include more than a dozen albums and concerts. 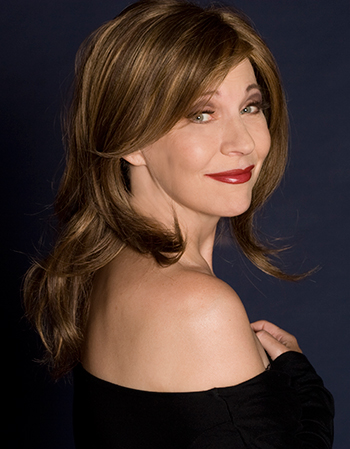 She most recently evoked Garland in Landmark Musical Theatre's production of The Boy From Oz in 2016 at the Great Star Theatre.

The Los Angeles production Judy's Scary Little Christmas, directed by Kay Cole, won Champagne a Los Angeles' Ovation Award for Outstanding Performance by an Actress in a Musical. Ironically, one nominee she beat for the award was Lorna Luft, daughter of Garland.

"I felt a little guilty about that one," said Champagne, "for some upstart like me, coming to LA, playing her mom."

At Oasis this Saturday, Champagne will celebrate the holidays as Judy with musical director Tammy Hall and her trio members Daria Johnson and Art Munkres, plus guest stars Kim Nalley and Scrumbly Koldewyn, who plays Fred Astaire. The other performers will be themselves.

Fans better get their tickets, because although she said, "I like doing this at least once a year," Champagne added, "but this may be the last time. I might hang it up."
Until that's decided, Champagne noted how happy she is to work with acclaimed pianist
Tammy Hall, whom she's known since they were students at Mills College.

"I recognized her talent immediately, but she was more of a jazz player," she said. "I took her to see more art rock and local acts. It's such a joy to work with someone I've known for more than half my life."

With American standards, holiday classics with a twist, and perhaps some rock hits done a la Judy, Champagne agrees that her concert defies specific genre categories.

"If you play music and do theatre and it's truthful and well done, it crosses any kind of lines that might separate people. There's something about Judy Garland and Christmas in many folks' minds."

True, holiday associations with Garland are many.

"Maybe it's because of the iconic performances; her 1963 campy Christmas special television show, and of course, her rendition of 'Have Yourself A Merry Little Christmas' in 'Meet Me In St. Louis.' We will definitely be playing the classics, along with some surprise tunes that Judy never sang but should have. This show will definitely get folks in the holiday spirit, even the cynics who say they hate Christmas are bound to have a good time!"