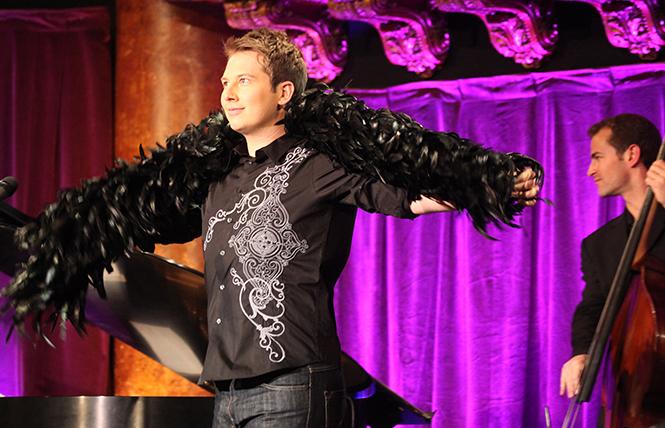 As he prepares for his November 30 show at Oakland's Sound Room (which is already sold out) and his December 9 show at Guerneville's Main St. Station, singer, actor and naughty comedian Shawn Ryan answered a volley of questions for the Bay Area Reporter. Ryan will also perform at the Marines Memorial Theater on December 10 in Help Is On The Way XVII, to benefit the Richmond Ermet Aid Foundation. Look for his new album, Shawn Ryan Live! 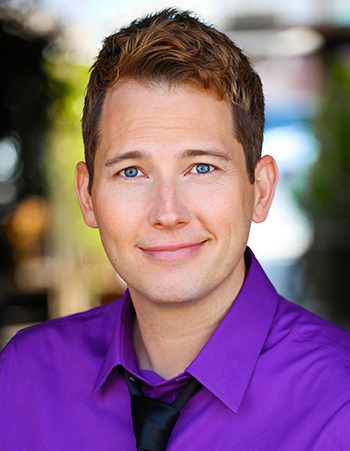 2: How did you come to be called The Love Child Of Peter Allen And Bette Midler?
When I started in this business, I had a really hard time finding my place. I couldn't just stand up and croon old Sinatra tunes, and I couldn't do my versions of show tunes, though I tried both. Neither one seemed to fit. So, I decided to be myself on stage. The debut of this new concoction was in San Francisco in 2007 at The Herbst Theatre. It was then that I was dubbed the love child of Peter Allen and Bette Midler. I had always adored Miss Midler; much of her performances shaped who I wanted to be on stage. He was and she is so distinctly unique and I love what they bring to audiences. I would've loved to actually been the product of that union, but of course, that never happened.

3: Tell us about your younger years.
My first professional job was as a rodeo clown in Pocatello, Idaho at five years old and the first time I heard 5,000 people laugh at a joke that I had made; I was hooked! I did professional theatre out of college. When a contract that I was in ended early, I decided to enter a Cabaret Contest. I won it and the rest, as they say, is history.

4: Who are your musical influences?
The Sherman Brothers were my first real intro to jazz. Any true jazz lovers just rolled their eyes at the white boy from Pleasanton, CA saying he learned about jazz from Disney. But it's true. It was the perfect combination of real jazz and theatrical interpretation and I adored it. "Bare Necessities" [from The Jungle Book] was on repeat on my tiny record player. Later I would realize that I liked bears for a whole different reason. 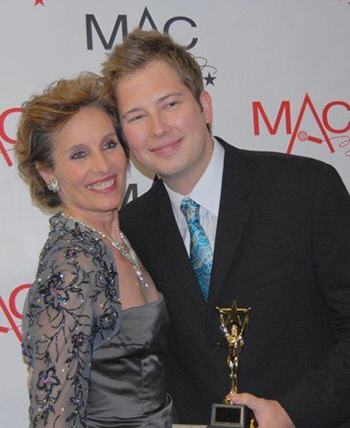 5: Who are your comedy influences?
Not to make this whole thing about Bette Midler, but she really was the one. I studied everything of hers my whole life. I was so obsessed, in fact, that when I was sixteen my first official date was with a girl (clears throat) to see Diva Las Vegas, Bette's then-touring show. The clincher was the girl I was taking was playing Peter Pan in our community theatre production to my Lost Boy #6. So my first date was taking Peter Pan to see Bette Midler. Freud would've had a field day.

6: Who are your gay role models?
My role models in high school were found in narrative films. Movies like Trick by Jim Fall, Love! Valour! Compassion!, and then the lessons in camp history like Auntie Mame and old episodes of The Judy Garland Show. The people in these tapes became my role models. Their art helped me imagine a world where I could be myself and live freely. Art has truly always been my greatest influence.

7: Talk about your friendship with the lovely Andrea Marcovicci.
I think our friendship is based in mutual admiration for the other's ability and I simply adore her. She lives the glamorous life of a cabaret queen that I aspire too. More often than not, we find ourselves super casually dressed eating in one of our favorite Hollywood diners just being silly and laughing. 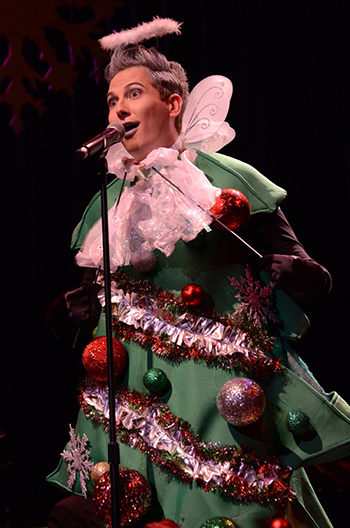 8: You are often very comic and naughty in your cabaret shows.
By nature, I'm a silly person. I enjoy a good dirty joke, but never crass; just enough to tease your ticklish spot. I always wanted our shows to feel like you were just in our living room having a cocktail and telling the latest dish about this or that. And there just happens to be a six-piece band there, too.

9: What drew you to music and comedy?
I love a good ballad; don't get me wrong. But I think what the world needs and wants is a good laugh. And what better way to present it than in that old-fashioned Judy Garland-esque way of adding a melody? So that's what we do. We don't take ourselves too seriously, we don't over plan. We just want you to order a cocktail, sit back and let us do all the heavy lifting.

10: Tell us about America's Got Talent. Were you outrageous? Out on the air? Did you shock them?
At no point did they check with me to see if it was okay to out me on national television. They did it quite kindly and I reacted with pure, genuine truth. I was out before, but this was cementing into the NBC archives. And I'm so glad that I got to be me on that show. My gayness wasn't what shocked them. It was my comedy, and they all agreed that our act was perfectly entertaining. Piers Morgan even said, "It looks like you were born to do this!" I had an absolute blast on that show!

11: What was your impression of Regis Philbin?
I love that man. Coming off stage of my first big win, the producers pulled me aside immediately and shouted at me with a camera in my face. And I held my hand up in front of the camera with a huge smile on my face and said, "I feel amazing. I'd love to visit hair and make up and the restroom and then come back for this interview." And at that moment, Regis was passing by and he exclaimed in his purely Regis tone, "I like this kid!" We were friends from that moment forward. 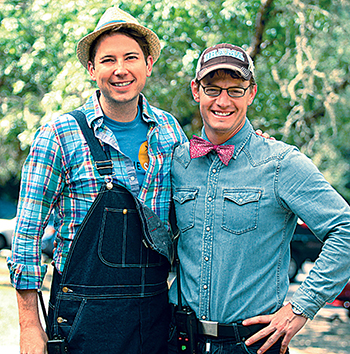 12: Did you win America's Got Talent?
We always knew we were not going to win. But we sold a ton of albums and each week 18 million people got to see what we do. I always truly believed that we did in fact win. Cabaret rooms for the most part hold 100-150 people. So in one night, our art and music could be seen by 18 million people! It was a huge win!

13: Tell me about Young Actor's Theatre Camp.
18 years ago, right out of college, I was working in a theatre camp as an Associate Director and I simply adored it. A year later, when that program had ended, my husband [film producer and actor John Ainsworth] thought it would be a great idea to do our own theatre camp. 17 years later, we have 700 campers a year, a staff of 50 amazing theatre and film professionals. Each summer we have four sessions, and also a Winter Film Camp. It is absolutely the most rewarding and fun thing I get to do all year. Teaching kids recharges my creative battery and the camp itself has inspired so much of my creative endeavors.

14: Your press release says that your new show is "twisted." How so?
You'll see me as Artie the Angel sitting atop a Christmas Tree singing "Who Put the Stump up my Rump a Bum ba Bum?" and asking the oh so important question, "Where'd the other HO go?" in regards to Santa losing one of his Ho, Ho, Hos. It's our take on some of your Holiday favorites, and we hope that you leave not being able to get our lyrics out of your head so that you'll take all the jokes to the water cooler the next day. 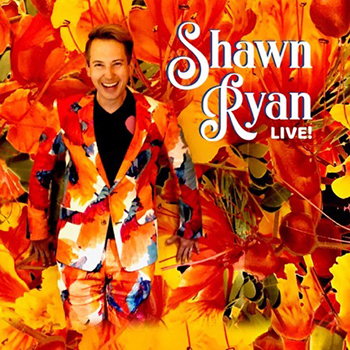 15: You have a song called "All I Want For Christmas Is My Foreskin Back?"
When some people hear the title they cringe, because they think it's gonna be dirty. And I always say, it's not dirty if you wash it. But seriously, it's actually G-rated. It's a medical wish. I was inspired by the shock factor, for sure. Once I had penned it, I realized it's actually quite an informative number that people go crazy over. And I love that people love it. It makes me so happy. The song, that is... and foreskin.

16: Another song called "Somebody Put Acid in the Eggnog?"
I did not write this amazing tune, having had no experience with acid. I see visions sober, so I never found that I needed help in that department. The brilliant composing team of Carner and Gregor penned this one and it is an amazingly hysterical tune about one family's holiday ... trip.

17: Tell us about the Shawn Ryan Live! album.
Our new album is a two-disc live recording. One disc is holiday-inspired with all your favorites like "Santa Claus Got Stuck In My Chimney" and "The Twelve Daze Of Christmas," in which we take a shot after each verse. The other disc is all our comedy favorites for the rest of the year like "If I Can't Sell It, I'll Keep Sitting On It" and all the show's patter, so hopefully it'll feel like you are right there in the room.

18: Tell us about the show you're doing on tour. How naughty and outrageous will you be?
I'm equal parts naughty and nice. I think that we all are so good during the Holidays. I mean, you know the big guy is watching! So, it's sort of fun to let loose for one night and be a little extra naughty. I'm only as naughty as the audience wants me to be. It struck me as funny that our new record received an "explicit" warning on the label. Explicit? Me? I don't see myself resembling that word at all. I like naughty better. It's the 1940s version of the word. Considering that is when most of the music I perform was written, I choose naughty.

19: What do you want audiences to take from the show?
I want them to leave with ten copies of our new album! I want them to put down the stress of the holiday, sit back with a fun holiday cocktail and just enjoy the absurdity of our show. We're guaranteeing belly laughs, a strong connection with your community during the holidays, and just an all-around fun night out. Bring the girls, let's make it an annual event.

20: What's next for the naughty and twisted Shawn Ryan?
All my Holiday shopping is done, wrapped and shipped to where ever it's supposed to go. Now my job is to come to each of these amazing cities on the tour, entertain, and soak in all the holiday love.