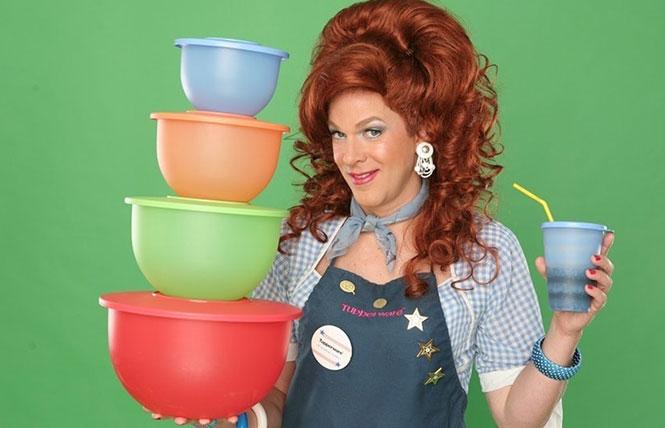 Yet it's true, ladies. Our drag-crazed campground of a city seems an obvious stop for the roving food-storage fiesta that's burped up a whole career for Southern California-based writer/performer Kris Andersson.

But the show, which has toured nationally since 2007 and has played two successful Off-Broadway runs, is just now making its local debut with a three-night engagement a Feinstein's at the Nikko next Thursday through Saturday.

Dixie Longate is Andersson's entendre-engorged stage name, and the auteur is sufficiently committed to his performance persona; he insisted on speaking to the Bay Area Reporter strictly in character.

"I'm so excited to drive down your street that's all squiggly-wiggly," Dixie blurted in her Southern-fried accent during a phone call last week. "I just hope I don't run over a cat or a gopher or a baby."

While noting that her San Francisco shows provide an opportunity for folks to stock up on food storage solutions prior to Thanksgiving, Dixie declares that her personal favorite holiday is Arbor Day, because she loves trees.

"It's really hard to find a card, though," she laments, tongue piercing cheek. 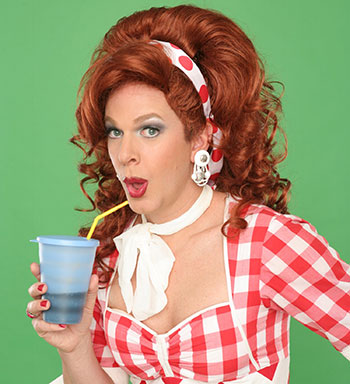 Dixie travels with a caftan's worth of yarns. Her boozy tales narrate the life of an Alabama single mama with three children (Wynonna, Dwayne and Absorbine, Jr.). She navigates impressively between the sort of broad cornpone humor mastered by Carol Burnett and Vicki Lawrence in their old "Eunice and Momma" sketches, and sexual innuendo as fresh as fridge-stored leftovers.

When one of Dixie's parties was covered by the Orange County Register, interest increased exponentially. Soon Andersson was putting on his wig and dress several times a week, and moving cake keepers, sippy cups, and salad bowls in significant numbers. In two subsequent years, Dixie was the Tupperware company's top national salesperson nationwide.

Urged by friends, Andersson submitted Dixie's Tupperware Party to the New York Fringe Festival in 2004, where the show proved a hit. Thus began a shift from living room parties for audiences in the dozens (with income generated by Tupperware sales) toward paid theatrical performances for crowds of hundreds, even thousands at an incredibly diverse range of venues, from gay cruises to casinos to the Iowa State Fair.

Simultaneously sly and silly, Dixie originated as a performance art lark in 2001, when, after attending a Tupperware party, Pittsburgh-born Andersson created the character to present his own unique spin on the plasticware shindigs.

"Every consultant runs her parties differently," says Dixie (The term 'Tupperware Lady' has become a corporate no-no). "Some play games, some share recipes. I encourage everyone to drink heavily and I tell stories."