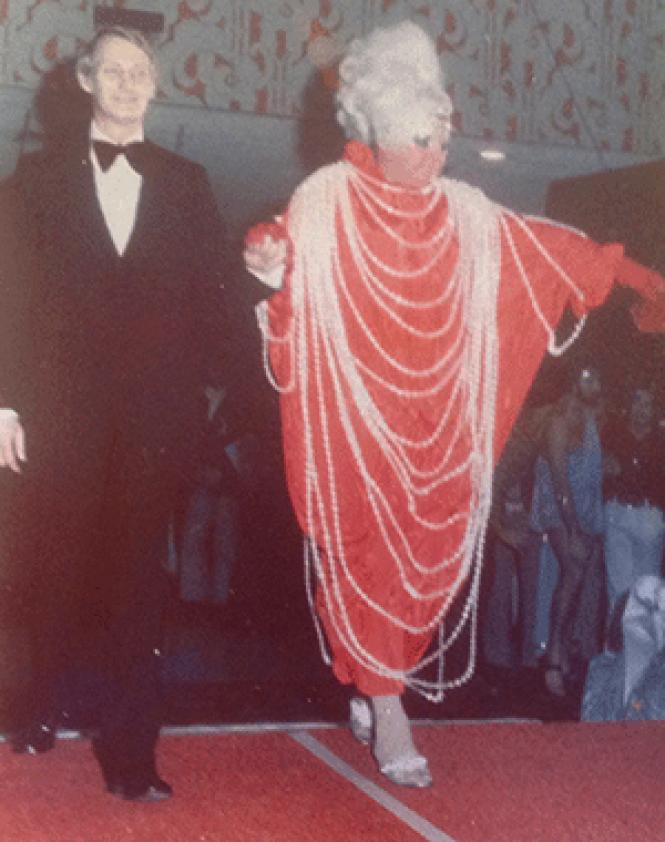 Sweet Lips at her Tzarina crowning in 1973, official title Czarina de Turk and Portland and Empress of Puerto Vallarta.

When does gossip become history? Richard "Sweet Lips" Walters wrote a column in the Bay Area Reporter from April 1, 1971 till June 24, 2010. first called "Sweet lips Sez" and eventually shortened to "Sweet Lips." The column included what you would expect from a gossip column such as blind items, innuendo and witty comments. But somewhere along the way it became much more than that.

In the past half year I've found myself referring to the column a few times, once to find out exactly when the Overpass became Marlena's and another time to find out when the New Bell Saloon moved into the *P.S. on Polk Street. Along with the gossip and chit chat, Lips documented the history of gay bar culture and so much more during his four decades in print.

It is really no surprise that he could so accurately document the community. He worked at a dizzying number of bars in his time in San Francisco.

"Yes, I am still doing my two-hour shifts on Saturday and Sunday at the Yacht Club and no I don't think I'm overworked," he wrote in May, 1989. Bars he worked at included Sally Stanford's Valhalla (in the '50s), the Paper Doll (later in the '50s), the Opera Club (in the '60s), the Kokpit, Ginger's Too, Kimo's, Googie's, Gilmore's, the Rendezvous, the Hob Nob, Susie Q, the Gangway and Ginger's Trois.

Working at gay bars in the '50s and '60s and with characters like Stanford gave Lips a strong social conscience which he displayed both in his personal life and his column. He would often drop warnings into his work.

"Remember to stay out of the Golden Gate Park restrooms as they are being carefully watched," he wrote in Feb. 1983. And in March, 1991 he warned "Attention: I have just been notified by Dick Pearson of the Cinch Bar that the police department and the ABC are using underage decoys to purchase liquor, so do be very careful who you serve as these decoys do look old enough. If you have the slightest doubt, please card them as not only the bar but the server gets a stiff fine."

As a bartender, he would help gay runaways with odd jobs like sweeping the street in front of his bar. Coy Meza, who eventually became Walters' caregiver and ghost writer in the last years of his life, met Lips when he was a fifteen-year-old runaway in San Francisco in the 1970s and benefited from his big heart.

Meza recounted hearing from Lips how he and José Sarria would dress in drag and bang pots together in front of bars to raise money for the mental health organization that eventually became New Leaf (often with bar owners giving them money just to get them to move).

Sarria also got Lips involved in the Tavern Guild early on, and his columns trace that history too. About this aspect of his life Meza said, "Lips was a bell ringer and activist hidden under a gossip columnist."

That persona served the community well when Lips began writing about charity for the KS Foundation (before it became the AIDS foundation) early in 1983.

Lips personal history tells much about how he became that bell ringer. Meza told me that age 19 he was kicked out of the Navy for being gay shortly before Pearl Harbor. He told Meza that he returned to San Francisco on a ship with many of the men he had served with, except that they were in body bags.

Occasionally the gossip columnist and activist both presented themselves at once. In a column entitled "Gilmore's Goes Straight" (August 23, 1993) he reports:

"By now you all know that Gilmore's new owner has fired all of the help - except I quit first - and also has thrown out all of the gay periodicals as it is no longer a gay establishment. It is a shame as it was a wonderfully mixed bar for 15 years and everyone got along so well - but times do change."

Whether because of Lips' wrath or poor business sense, Gilmore's closed and became the Hyde Out within a year.

It would be a mistake to think that Lips was a bleeding heart that occasionally donned a dress, however. A large part of his draw was that he was so much fun.

He told Vector in 1973 that when he worked for Bill Plath at the Opera Club, "He just couldn't bring himself to call me 'acid lips' so he gave me the name 'Sweet Lips.'"

And the name and the reputation that came with those lips resulted in annual "hangings" of Sweet Lips - actually the hanging of a painting of Lips (that looks disturbingly like Bette Davis as Baby Jane Hudson) which patrons would then bid on to take down - and the money would go to charity.

These "hangings" became protracted bacchanals that would go over a weekend's time. Walters wrote in 1989, "This weekend, April 1 and 2, brings about the twentieth hanging of Sweet Lips and of course it probably won't take again. The madness starts at the Kokpit...with a luxury bus taking you to many interesting places around town...the tour leaves at 10 am and makes all, yes all, the following water holes: the Gangway, the Polk Gulch Saloon, the New Bell Saloon and then on to Kimo's penthouse for a sumptuous buffet prepared by Marlena and staff...and onto the White Swallow, thento the popular Yacht Club. If you are still with us it's on to Gilmore's...then on to the Gate bar, then the Hob Nob...and finally back to the Kokpit."

Lips did not approach drag seriously - it was a truly camp undertaking for him. He once rode into Polk Gulch on the back of a motorcycle in full drag. Meza told me that the blunt and vulgar humor was part of his bartending routine as well. Lips figured if you could take an insult and give one back that you'd be able to stand up to the police if they showed up in a bar.

All the while Lips was promoting the community. In 1974 he put together a hand-drawn map with the bars and baths on it which he distributed for free. In a Aug. 1974 he advertised it, "Flash..Flash...you can now obtain the famous Sweet Lips map of San Francisco at the Kokpit and the Gangway...so if you want a copy, do drop by and ask for one...remember, it's FREE."

Late in Lips' life, Meza became his caregiver and would push him in his wheelchair around to clubs to get the dish. They developed "Lips' club of spies" to tell them what the dirt was around town. Meza would read him what he wrote to see if he approved. The collaboration worked well. Meza remembers receiving a letter from an eighty-year-old from Florida telling Lips, "Glad you're writing gay again."

Historians could do much worse than to look at these columns which trace the openings and closings of bars, the concerns of the LGBT community and the lives of people both known and unknown. Lips' columns speak to us even today in our post-gay world and reminds us (from 1978), "As Jose would say, 'United we stand; divided they'll get us one by one.' Remember this all."