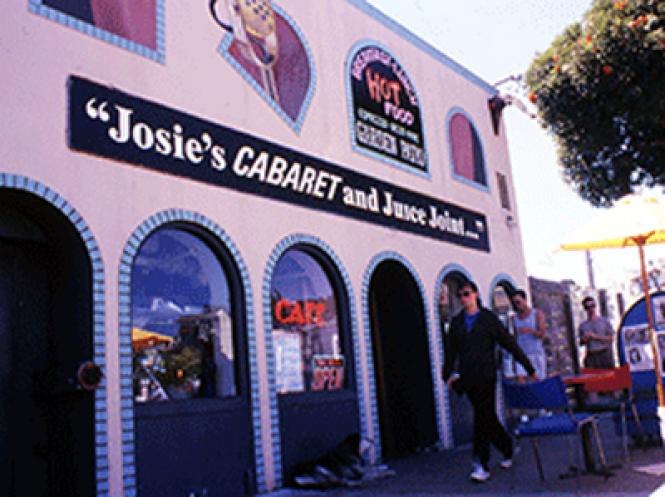 The exterior of Josie's Cabaret and Juice Joint which was at 16th and Market Streets, in late August 1998  (Source:Rick Gerharter)

Shortly after having moved to San Francisco in the early 1980s, I was introduced to the concept of gay stand-up comedy (as it was called then). I was working at a bookstore downtown and my coworker, Paul Phillips, had started performing at Valencia Rose as part of the duo Romanovsky & Phillips. The emcee for that night was Lea De Laria and the concept became crystal clear that night.

As well as introducing gay comedy, that evening also introduced me to the Valencia Rose, where I spent many enjoyable evenings. The Rose, which was at 766 Valencia Street, was sort of an all-purpose community and performance center as well as being a café. It was started in January 1982 by Ron Lanza and Hank Wilson. In an April 1982 Bay Area Reporter article "Valencia Street: A Renaissance Starts" by George Mendenhall, Lanza said, "There is a special ambience here that we wish to save. Our hope and belief is that it will not become a Castro Street or a Union Street. We hope we can keep this wonderful mix of people."

The origin of Gay Comedy Night (which was on Monday) came from Tom Ammiano. As Ammiano said in "A Funny Time To Be Gay" by Ed Karvoski, "I suggested to Ron and Hank that we do gay comedy there. They said, 'What's gay comedy?' I said, 'I don't know. All I know is I go to straight comedy clubs and I try to be funny, and I talk about being gay and they want to eat my liver! I need a place to develop.'"

Marga Gomez, who showed up at one of the Monday Gay Comedy Nights, said in her BARtab article about the Rose, "The Valencia Rose had the best audience a queer or queer-friendly comic could ever want."

The Rose was more than a performance venue, however. It also acted as a community center and a site for political organizing. Among the flyers I found at the GLBT Historical Society Archives while researching this article were those advertising benefits for Cleve Jones and Dennis Peron's candidacy, to the Democratic Central Committee and a benefit for Pat Norman for Supervisor. Another advertised a potluck Thanksgiving dinner for people with AIDS and their friends, sponsored by the San Francisco AIDS Foundation and the Shanti Project.

There was always some sort of political activity going on there on the second floor. It was where I attended the first meeting of the Documentation of AIDS Issues and Research, an archival organization I went on to head for several years.

It was, however, as a performance venue that it perhaps made its biggest impact. Whoopi Goldberg, Jane Dornacker, Charles Busch, Doug Holsclaw, Kate Clinton and Steven Grossman all performed there, and Jose Sarria and Hazel McGinnis performed there for the 20th anniversary of the closing of the Black Cat. When word spread that it was closing (the final night was November 30, 1985) there was much anguish.

So it was with great fanfare that the article, "Valencia Rose To Be Resurrected as Josie's" by Allen White appeared in the B.A.R. in October, 1989. There were some initial hurdles to be overcome as the Duboce Triangle Association was concerned about noise from a performance venue, but after their concerns were allayed Josie's opened in January 1990 with Donald Montwill (who had been artistic director at the Rose) becoming a partner in Hank Wilson's place.

Josie's initial drive was to limit tits focus, and Montwill told White, "The difference between this place and the Valencia Rose is this place will be a performance place only."

One evening in particular stands out in my mind, a performance by Phranc as Neil Diamond called Hot August Phranc , which was just as wonderful as you would imagine.

Josie's was a vital performance spot in the heart of the Castro. On the side of the building was a mural entitled Life by Gretchen Rosenblatt which overlooked the burned-out site of the old Trinity Methodist Church and the Eureka Theater (which had been in its basement).

I asked Larry-Bob Roberts, co-host of Magnet's open mic night with Dana Hopkins, for his thoughts regarding the importance of Josie's.

"There were performers that I saw for the first time at Josie's that I am still a fan of to this day, like Varla Jean Merman and John Kelly. Joan Jett Blakk's talk shows had amazing guests, like Kiki and Herb and Nao Bustamante...Ron Lanza gave Nick Leonard and me his blessing to continue Monday Night Gay Comedy after the closure of Josie's, which we did at various venues under the name QComedy. Nick had been a cook at Josie's and got his start doing standup at the comedy open mic at Josie's."

Perhaps it was because it was in a more central location in the gay community, or perhaps the community had finally caught up with it, but Josie's lasted more than twice as long as Valencia Rose. Even when it seemed as if it might be closing, we were never really sure.

In 1998 Lanza had an elaborate farewell party and then reopened two months later (after a deal with a restaurant fell through). In the last year it once again became a political hub as it acted as the campaign headquarters for Tom Ammiano's write-in campaign for mayor against Willie Brown (which was successful in that it caused a runoff election, but he ultimately lost to Brown).

But finally the club really did close on December 31, 1999. And much as with the Valencia Rose, the closing act was Marga Gomez. The restaurant Starbelly currently occupies the address.

Roberts echoed my own thoughts when he told me, " lang=EN>The recent opening of Oasis has finally provided an affordable queer cabaret venue that was missing for 15 years."

We lost Donald Montwill in 2002 and Ron Lanza in 2013. But if you want to remember Josie's or the Valencia Rose, I'm sure they would agree that the best way to do it is to stop by the Oasis or go see Marga Gomez in Pound at Brava Theater.