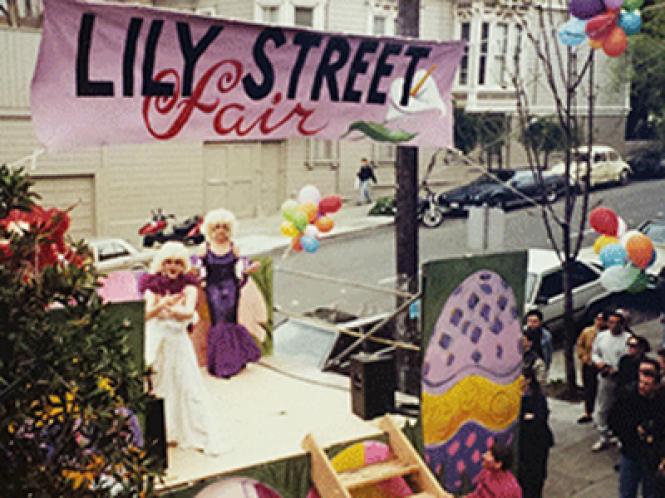 Many of the events in our community have deep roots. Some have a political genesis like Pink Saturday and its relationship to ACT-UP protests in the Castro. Others have sexual contenxt, like the Folsom Street Fair and its growth from the CMC Carnival.

Still others are expressions of fun and frivolity, like Halloween in the Castro.

The Lily Street Fair, which existed in San Francisco from 1981 to 1990, fell into the latter category. Part block party and part potluck with a good dose of Easter bonnets and Easter parade thrown in to add zest, it was an original, fun and enjoyable event for the whole Lower Haight/Hayes Valley neighborhood.

Lily Street is a four-block-long partially one-way street -often mistaken for an alley- that runs between Franklin and Buchanan. Beginning in 1981, the Oak Hill Neighborhood Association held a potluck in the 300 block of Lily between Buchanan and Laguna on Easter Sunday. Originally the event had a small neighborhood feel, but it began to draw crowds by the mid-1980s, particularly for the Easter egg hunt, free beer and the annual Easter bonnet contest, whose winner was decided by the applause of the audience.

By 1985, the event had gotten the attention of the gay press and Bay Area Reporter writer Allen White featured it in an article on Easter events. White wrote about the extraordinary contest that year:

"There were 19 contestants in the Easter bonnet contest. Showing a possible sign of changing gay taste, the winner of the Easter bonnet contest was Mr. McDuff, a 14-year-old Scottish terrier. His owner Mark Carey was delighted and bragged that the dog was 98-years-old in dog years (a sign of hope for all senior citizens). The bonnets (and the contests) were always extravagant."

In a 1988 B.A.R. article, Ms. Marina Green told White, "The first year there were only six of us, and this year there were over 50. The first year I had a Mexican sombrero that had a large floral display with a tin doll chained to an Easter basket." Throughout the years other contestants included Eggy Pop, Ms. Peckerhead, a group who participated as The Calla Lilies and a contestant who wore a hat which commemorated Patsy Cline's plane crash.

If you think that a gay contest event where a dog could wear a hat sounds like frivolous but heartfelt fun, you would be correct. In a letter to the B.A.R. in 1985 (correcting Mr. Marcus, who had said there would not be free beer that year) one of the founders, Carl Heimann, referred to himself as "one of the Lily-putians."

The year after Mr. McDuff won the contest, it was won by a Miss Box Lunch and White reported: "Asked how it felt to follow a dog as a winner, Miss Box Lunch simply replied, 'Last year a dog, this year a bitch.' Many of his friends standing nearby nodded in agreement."

Along with the bonnet contest, there was an annual Easter egg hunt, with some plastic eggs containing condoms and others with whistles from the Center United Against Violence (CUAV) for the adults.

And beginning in 1986 there was an Easter Parade down the block performed to "Easter Parade," naturally a recording of the version sung by Judy Garland.

Food booths popped up late in the event as well, with donations for various causes. In 1988, the drag queen self-named Lily Street told the B.A.R. they would serve, "Submarine sandwiches; the money goes to the Grand Ducal Court. The Polish sausages over there, that goes to the Imperial Court. The beer is free. T-shirts and mementos go to help pay for the party."

I spoke with Brad Cavalier, who lived on Oak Street and began attending the event in 1983.

Regarding the attitude, he said, "It evolved as a respite from some of the other much larger street fairs such as Folsom, Castro or Polk Street...The Lily Street Easter Fair was held on Easter Sunday and was a non-political event, just a fun time to have a day to be without loss, and to embrace living in the moment."

John Wullbrandt, an artist who lived at 1800 Market Street (current home of the LGBT Community Center) recalled in a letter to The Castro Star that he painted the set and decorations for the fair next door to his apartment on the roof of the 1808 Club (a former neighborhood sex club). Regarding the painting, John told me, "We had the Giant Calla Lilies lining both sides of the block one year."

In a 1986 article, Allen White indicated there had been more than 1,200 in 1985 and that they were planning for 2,000 that year. And as the crowds grew the event became even more festive. A flatbed truck was parked at the end of the street and turned into a makeshift stage for performers and entertainers. Comedian Danny Williams co-emceed the event with Empress Lily Street in 1987 and Marga Gomez and Jon Sugar provided entertainment in 1988.

Regarding preparations for the event, Cavalier recalled, "The sound system was Simeon's and I would drag the equipment across Oak Street to Lily Street and plug into Tom O'Dea's garage to power up the sound. We'd set up early in the morning to get power and test the sound system, usually tripping Tom's breakers. So we had a generator to off-set power, set the staging, and yes, for many years it was a flatbed truck. In 1989 and 1990 we built a stage on scaffold."

In the years since the event there has been some confusion regarding Empress Lily Street and her relationship to the event. The Empress didn't take on the name Lily Street until 1983, two years after the fair had begun. Even at the time there was confusion.

The Empress told Alan White (in 1988): "The Lily Street Easter Party isn't Lily Street's party. This is a neighborhood effort. We all work together, and I took my name from the street. There has been a core of four or five of us, including Carl Heimann, Tom Tripp, Ron Klokie and Tom O'Dea."

The event had a nearly ten-year run before its end, which occurred in 1990 with a notice in the form of a letter to the B.A.R. from Heimann which stated there would be no party that year. The reasons were not stated, but it appears that the logistics may have just outgrown what was possible for a small community organization.

As an addendum to his letter, his last words on the fair were "The calla lilies are in bloom again."

Even though the event lasted less than ten years, it is fondly remembered to this day. And though the Lily Street Fair did not have an obvious political message, just having a good time in the face of the AIDS epidemic was in itself a political act.

Our heroes aren't always politicians or activists and they don't always do big things. Sometimes they come to wear a festive chapeau and distract us from the problems of the day.