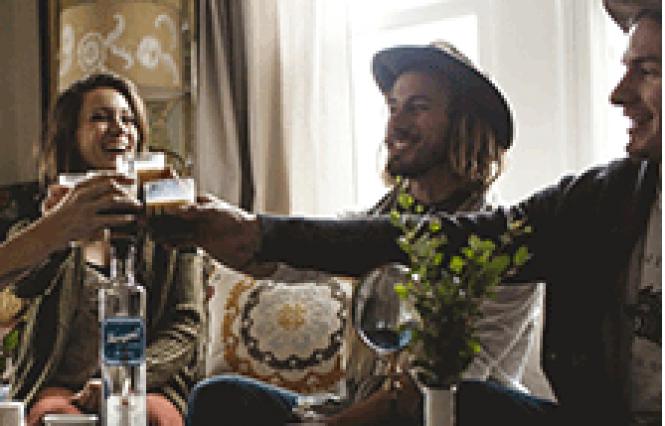 Sure, that cheery red nose could indicate you're a reindeer. But as a BARtab reader, you're more likely a booze hound. It's the time of year to get generous and share the gift of guzzle with your nearest and dearest. Here's our annual guide to gifts for tipplers.

Whether you prefer to give homemade or store-bought gifts, the Alkemista provides solutions, literally. This cleverly designed "Alcohol Infusion Vessel" is the perfect present for your favorite home mixologist; or you can keep it and craft imaginative yuletide spirits to give to friends and family.

The elegantly simple Alkemista, which began as a Kickstarter project, marries a clear glass bottle to a perforated stainless steel filter akin to those found in Japanese teapots. Pack the filter with fruit, herbs, or spices; lock it into the bottle's removable steel bottom, attach the bottle body, and fill with the spirit of your choice.

As a tribute to Alkemista's inspiration, I loaded the filter with a favorite loose tea blend, along with thin slices of fresh ginger and a halved Clementine, then filled the bottle with vodka. A day later, the liquid had taken on a rich amber color and its complex flavor invited straight sipping as well as cocktail mixing. Absolutely no solid particles had escaped the filter, and there was zero leakage from the removable bottom.

Ethan+Ashe, the Los Angeles-based creator of the Alkemista, provides intriguing recipe ideas (whisky and pipe tobacco!) along with suggested infusion times for specific ingredients in a booklet that accompanies the device.

Empty stoppered bottles are also sold, so you can transfer your house hooch for gifting. But why not get as creative with your vessels as your infusions? Fill a flask, a decanter or even a Camelbak and give two gifts in one. Alkemista. $59.99. www.ethanashe.com

SIA Scotch is not intended for drinkers aiming to swing from the chandelier.

"This isn't a party drink. It's not for doing shots," explains SIA founder and longtime Scotch aficionado Carin Luna-Otaseki, who oversaw the brand's blend of Speyside, Islay and Highland Malts. "It's a drink to savor and enjoy over conversation." (The name is Gaelic for the number 6).

That said, Luna-Otaseki, a former creative director who recently relocated from Potrero Hill to Napa, insists that unlike many single malts, SIA's blend will please the palates of somewhat Scotch-guarded members of the drinking public.

"People who are new to Scotch are often turned off by a strong, smoky nose. SIA starts with vanilla, caramel, and citrus notes and holds back on the smoke until the finish."

Another leading lady in the local spirit world is Caley Shoemaker, distiller at Hangar One Vodka in Alameda. Among her special projects is the crafting of seasonal "Distiller's Exclusive" offerings. She's currently featuring a sensational pink peppercorn variety.

Organic peppercorns from Hollister provide a surprising sweet note and an almost physical tingle with every sip, with none of the heat you may associate with other highly spiced vodkas (Unlike habaneros and jalapenos, peppercorns are not peppers). It sips great straight, and a half shot makes a perfect spike for a mug of cocoa.

Unlike the brand's citrus flavors, which are available at retail nationally, limited edition Hangar One Pink Peppercorn is particularly giftable, because it can only be purchased in-person at the distillery ($29.99) Leave yourself time for a tour!

You can taste Thad Vogler's passion for unique, handcrafted spirits whenever you order a cocktail at his San Francisco restaurants, Trou Normand and Bar Agricole. Often, when mixologists find themselves in the spotlight, they take advantage of the moment by cranking out a volume of cocktail recipes (Somewhere, there's a dusty, mile-long shelf of them).

But Vogler has taken a far more interesting approach to the barman's book: By the Smoke and the Smell: My Search for the Rare and Sublime on the Spirits Trail (Ten Speed Books) is a tipsy travelogue in which readers accompany Vogler on visits to tiny, agriculturally-rooted distilleries in France, Scotland, Ireland, Cuba, and Mexico.

Vogler's prose is as smooth and nuanced as a fine digestif and, while introducing the reader to eccentric craftsmen and surprising insights on the creation of top notch tipples, he also drops some provocative advocacy. Why is it that so many self-proclaimed 'foodies' insist that their plates be laden with the organic and artisanal, but willingly fill their glasses with mass-produced booze?

Armchair/barstool travelers on your gift list will also appreciate Lonely Planet's Global Beer Tour (Lonely Planet). The book guides readers to the best craft and micro-breweries in 32 countries, providing detailed information on each, including a must-try brew and tips on other vacation activities in close proximity.

Its hard to look away from the clever XYZ line of barware designed by Kathryn Gooding, of Asta Glass in South San Francisco. Her cheeky open zipper motif is available on a wide range of vessels that are, well, totally fly. From martini glasses to serving pitchers, the zippers are down and the cocktails are showing. Is that a champagne skin flute, dear? Or are you just bubbly to see me?

Asta Glass is a wholesaler only. Order the entire XYZ collection from www.giftedhomedecor.com or find select pieces at Walter Adams Gallery locations in San Francisco. From $75.

Sold in a box that's snazzier than any wrapping paper you're likely to find, Herb & Lou's Infused Cubes make for easy gift-giving, and genuinely tasty cocktails. Packed in a tray of a individually sealed cups, just pop these pups in the freezer and, in a few hours, you're a one-move mixologist.

Each of three varieties makes a dozen chunky flavor-packed ice cubes, specifically tailored to a particular liquor (Though experimentation is welcome). In vodka, the Cecile cubes release a blend of watermelon, cucumber, honey and thyme as they melt.

The Clyde cubes add peach notes, Benedictine herbs, and bitters to tequila. And the Cooper brings a remarkably well-balanced blend of blood orange and ginger to bourbon. Just be aware that some drinkers may consider that a Mini Cooper. Herb & Lou's flavor formulas assume one shot of booze to one cube. Still, it's a fun and undeniably spiffy gift.

Available at Paper Source stores in the Bay Area, and online at www.amazon.com and www.herbandlous.com. $16.99 and up.

Great gifts often have a story behind them. In the case of Astral Tequila, it's a most interesting story.

No longer under contract to Dos Equis beer, Jonathan Goldsmith, the actor who for years played that brand's Most Interesting Man in the World character, has been recruited by boutique San Francisco advertising agency, Erich & Kallman, to be the pitchman for Astral.

In production, the agave pulp is not removed from the juice until after the fermentation process, leading to a pleasingly pungent aroma and a tinge of funk on the palate. It has been steadily racking up awards since its introduction earlier this year (Food & Wine Top 10 Blanco Tequilas, Double Gold Medal in the San Francisco World Spirits Competition, etc.) Look for the rustic bottle with the pretty blue label. And be aware of Astral's most interesting potency: Its 92 proof-among the stronger tequilas out there.

Available at most major liquor stores throughout the Bay Area.