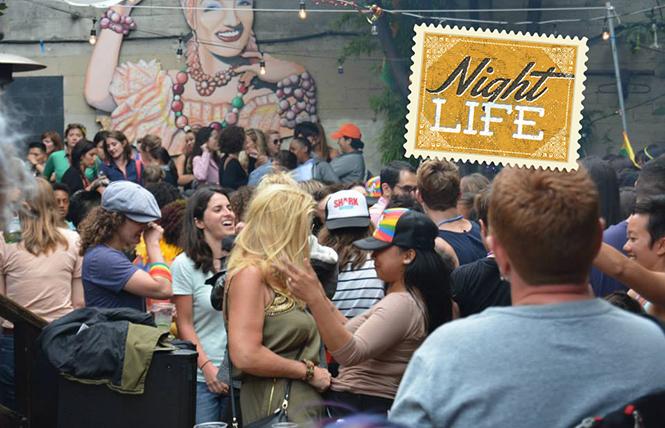 Mango at El Rio is a regular women's favorite.

Offering a special flavor of entertainment, your picks for best weekly, monthly and not-so-regularly events showcases the diverse aspects of Bay Area nightlife.


Best Women's Event: Mango at El Rio
Runners-up: Uhaul at Oasis, Ships in the night at The New Parish (Oakland)
Mango has been going on for over 20 years now - and any time there is an ongoing party that lasts that long, you know it has something important going for it. Back in 2013 The Bold Italic wrote that "Mango is a glimpse into what San Francisco used to be." There are drink specials (mango margaritas), free BBQ and amazing music. Come get a glimpse of what used to be...and can be again. Well done, Mango!


Best Comedy Night: Comedy Returns at El Rio
Runners-up: Comedy night at the Eagle, Comedy Night at Club OMG
"Two comedians walk into a bar...."
If the bar is El Rio, they'll turn around because they can't face the competition. Lisa Geduldig (of Kung Pao Kosher Comedy) presents a monthly comedy event which has recently featured Diane Amos (the Pine Sol lady), Tom Ammiano, Karen Ripley, Karinda Dobbins and many more. It's the third Friday of the month - check out El Rio's calendar online for details.


Best Nightlife event (non-weekly, non-monthly): Hard French at El Rio
Runners-up: House Party at Powerhouse, Comfort & Joy at various venues
Hard French describes themselves as an "outdoor daytime soul music dance party that sets out to modernize, takeover, revamp, trick out, revive, and do up the dance party experience." In the last year they have performed with Ronnie Spector and the Ronettes for Pride and with Thelma Houston for the Winter Ball. After eight years, they've limited their parties to a few special annual events. 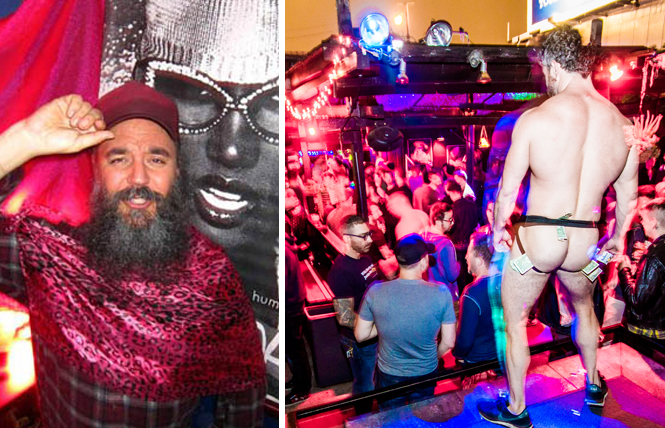 Best Monthly Nightlife Event: Disco Daddy at SF Eagle
Runners-up: Beatpig at The Powerhouse, Daytime Realness at El Rio
DJ Bus Station John has been doing his part to make people shake their asses at bars (be it Aunt Charlie's with Tubesteak Connection or the Eagle with Disco Daddy) for some time now. Whether mixing from vintage records or mixes, he recharges nightlife with retro classics. In a recent post online he said, "It's on us old school DJs (regardless of age) to do our part to raise the bar on today's dance floor as best we can, to elevate the taste levels of younger people by exposing them to music created by singers & musicians with actual talent." Bravo!

Best Theme Night: Pound Puppy at SF Eagle
Runners-up: Onesie Parties at Lookout, Cubcake at Lone Star Saloon
Who doesn't love a stray? Blake Cedric and Jorge Portillo, Pound Puppy's hosts, describe it as "a monthly party at the SF Eagle that turns tops into bottoms, featuring the current underground DJs of the future." While not as specifically kinky toward the canine fetish, its blend of listenable grooves from visiting and resident DJs provides a welcoming atmosphere for bears, cubs, otters and other various creatures.

Best Game Night: Gaymer Night at SF Eagle
Runners-up: Bottoms Ups Bingo at Hi Tops. Miss Kitty's Trivia Night at Wild Side West
The SF Eagle tops the list again with its perennial favorite. Games featured include Tekken 7, Injustice 2, Dragonball Fighter Z, Street Fighter, Just Dance 2018, Super Mario Kart and more. And since it's at The Eagle, you're guaranteed to have a good time watching the players even if you don't join in!

Best Weekly Nightlife event: Beer Bust at SF Eagle
Runners-up: Mother at Oasis, Musical Mondays at The Edge
Hot men, cold beer and the Eagle - what more could you possibly want? In the past year the Beer Bust has benefited Tenderloin Tessie's and the SF Eagle's queer arts residency program. So it's not like you're just going out drinking and cruising - it's a community building event. But don't let that stop you from drinking and cruising. 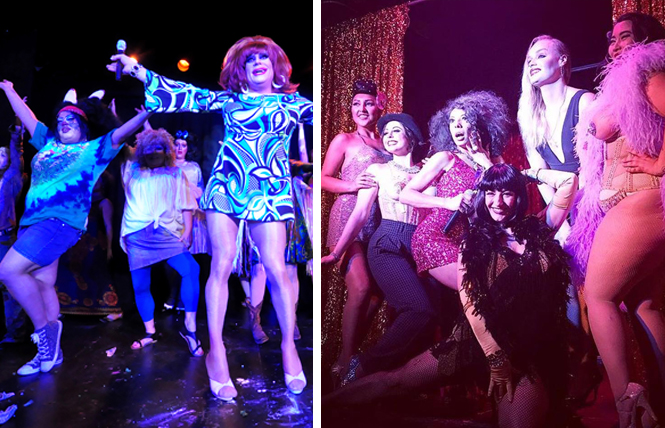 Best Drag Show: Mother at Oasis
Runners-up: The Monster Show at The Edge, Sunday's a Drag at The Starlight Room
Mother is, well, the mother of all drag shows in San Francisco. With upcoming tributes to Cher, Andrew Lloyd Webber and the Ladies of the '90s, the show -with roots at the Stud and moved with Heklina and crew to the Oasis when it opened- shows absolutely no sign of slowing down. A spectacularly fun night out awaits you at Mother.

Best Stage Show in a Bar/Restaurant: Red Hots Burlesque at The Stud
Runners-up: Bitch Slap at Oasis, Mommie Queerest at Oasis
Red Hots Burlesque is the longest running queer burlesque show in the United States. Their act incorporates cabaret and circus acts into a burlesque act. What could possibly be better, except (of course) seeing them in SoMa at The Stud? This is a match made in a very naughty randy heaven, and a well-deserved reward. 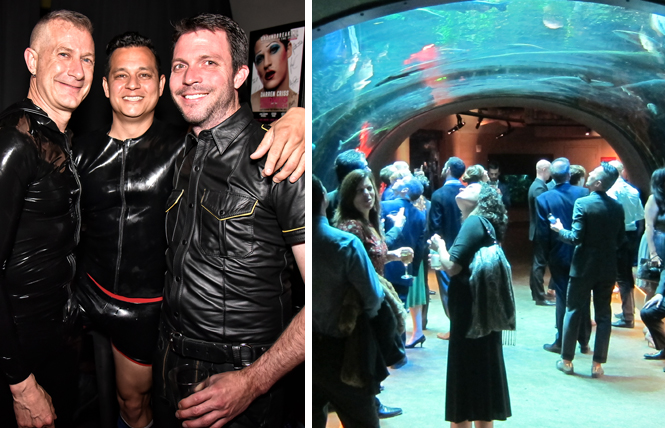 Best (non-contest) Leather Event at a Bar: Code at The Edge
Runners-up: BLUF at SF Eagle, Lick It at Powerhouse
Created and organized by Best Bartender Erick Lopez, Code at the Edge is dedicated to a return of leather culture to the Castro. They remind their patrons that there doesn't need to be a festival or a fair to get into your leathers. Their motto is, "No frills. No fluff. Just men in gear." This sentiment is a worthy goal and it obviously rings true to our readers.

Best Unusual Nightlife Event: Nightlife at California Academy of Sciences
Runners-up: After Dark at The Exploratorium, Flagging in the Park
When is the last time you were on a date with an albino alligator? Well, here's your chance! Upcoming Nightlife events at the California Academy of Sciences include events on life in space and a spotlight on biodiversity in jungles, beaches and the city. All of this with a drink in your hand in lovely Golden Gate Park - this is an event that our readers say you should check out.