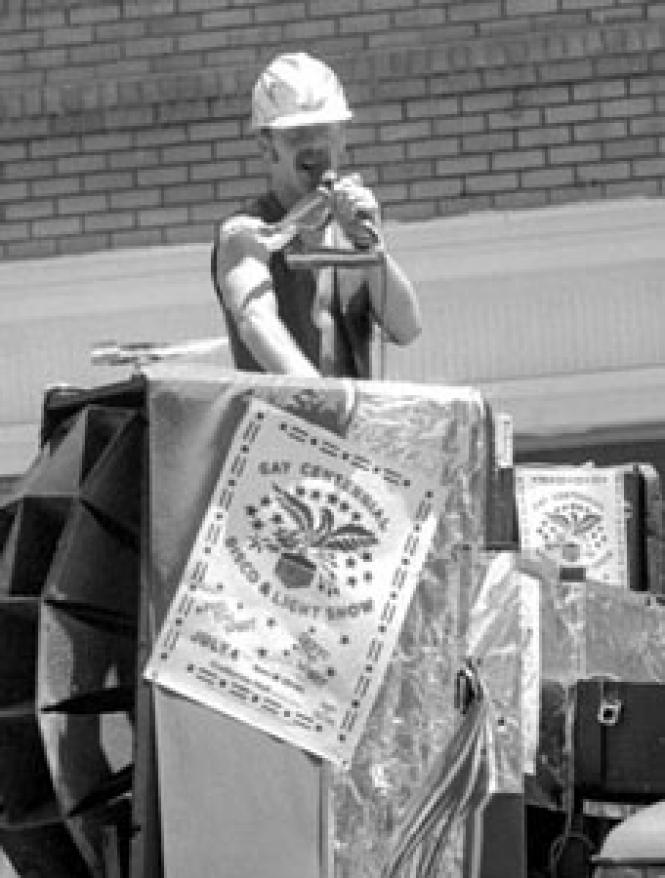 "Want to watch the parade?" Essex said. He'd gone last year. It was all new to me.

"I love a parade," I said, taking a last toke on the dying roach.

"The parade route's different this year," Essex said, "but I bet we can find it."

"Bet we can," I said, popping the dead roach in my mouth.

We hopped in the mustard yellow van and headed for Polk Street. Parking spots were non-existent.

"There's one," Essex said. He pulled the van into a yellow loading zone and hopped out. His purple tank-top came off and was threaded under his belt, showing off his many years at the gym. Groups of shirtless men passed us. "Let's follow them," he said.

The parade was forming along Polk Street. I retrieved a "1976 Official Gay Freedom Day Program" someone had dropped.

"It says here the parade will form on Polk Street between Pacific and Pine, head to Market Street, then to Noe, and end up at Duboce Park," I said. The cover of the eight-page brochure featured a long stemmed rose dividing two women from two men, all balanced on an open hand.

We continued down Polk toward Pine. The roar of motorcycles brought us curbside just in time to see bare breasted Dykes on Bikes gunning their Hogs and Choppers, leading off the parade.

"That's new," Essex said above the roar of the bikes. The scent of exhaust fumes and sweat hung in the hot air.

Dykes on Bikes continued vroom-ing their way toward Market. Floats sponsored by gay bars and other gay groups followed. A vintage firetruck from a Folsom Street bar was cheered as it sprayed the crowd. The Angels of Light gave the crowd a free show as they tap-danced to applause from the crowd. A shirtless Kermit the Frog in short-shorts, a bouquet of roses ready for Miss Piggy, rode aloft on the roof of a pickup truck.

Rainbow flags weren't symbolic yet and political floats not yet de rigueur. Gay Freedom Day 1976 was a celebration filled with lighthearted fun. With temperatures in the 90s most guys and some gals in the estimated crowd of 90,000 to 120,000 were shirtless.

We reached the Civic Center at Market, where the parade usually ended and post parade celebrations began. "There's nothing here," Essex said. "Want to go to the Gay Freedom Day Fair at Marx Meadow?"

Post parade celebrations had been moved to Duboce Park where shuttle buses took revelers to Marx Meadow in Golden Gate Park. We made our way back to the van. It hadn't been towed.

We found Marx Meadow near JFK Drive. A crowd was gathering. Squawks from the on-stage sound system delayed the show. The crowd continued to grow. The temperature rose. Many made their way to the shady glens that fed into the meadow. More than shirts came off. Other gay celebrations were consummated.

I found myself buck naked as we waited for the faulty sound system to be fixed. A disco flatbed float with sound arrived. The on-stage system finally came to life. The crowd roared at the double treat and stayed for the enchantment, and the sunburn.

By the following year the parade route was changed to pretty much what it is today. Variations of the rainbow flag were introduced, and the floats were more political. It still remained a day of celebration and fun.