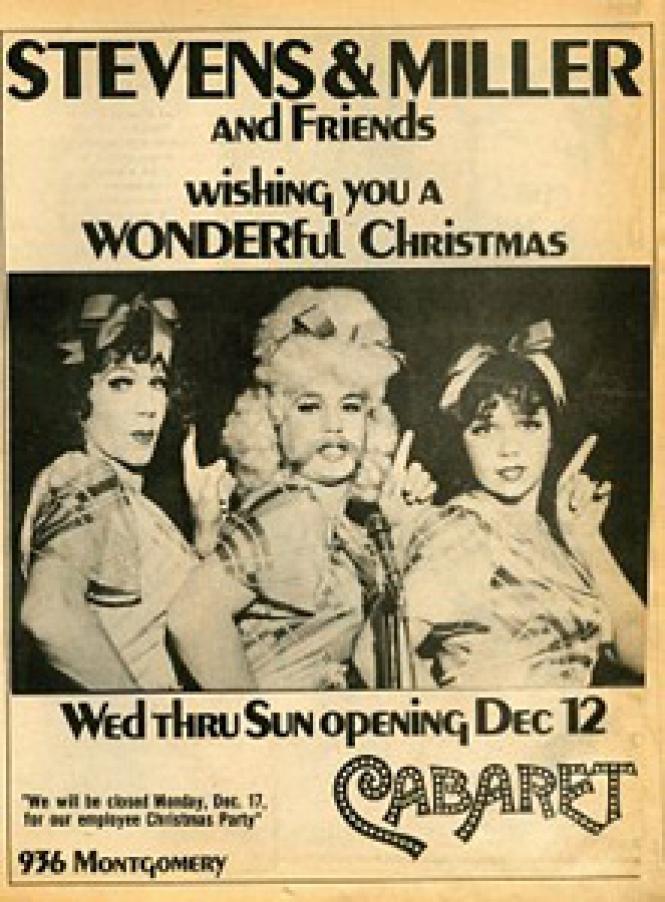 The winter holidays are the most obvious time of year when gays, separated from their parents, are forced to decide between biological family and acquired family.

While hopefully more LGBT people than ever before are comfortably out to their families, at least enough to attend traditional holidays with them, in the early days of San Francisco's gay community, that wasn't the case.

The post-World War II environment of queer refugees left many homosexual men and women who discovered their same-sex desires during the war forced to make the decision of staying in the gay-friendly community where they docked, or return to the closet and their original homes. Many stayed in the Bay Area.

So, Christmas or Hanukkah approaches. What's a gay guy or gal to do? Fortunately, the growing number of gay bars anticipated this need for alternative community. Many bars stayed open through these days and nights, offering more than a bit of spiked eggnog for patrons who might otherwise spend the days alone.

Check out the full-page ad for Cabaret in a December 1973 issue of our parent publication, The Bay Area Reporter. Promising what appears to be a post-war Andrews Sisters drag tribute act, "Stevens & Miller and Friends" wish patrons a "WONDERful Christmas." They even host an "employee Christmas Party.

In the same issue, other bar advertised holiday parties. The S.I.R. (Society for Individual Rights) hosted a "Mary Kish Mess" review December 15 and 16 at the SIR Center on 83 6th St. The Ramrod (1225 Folsom St.) held its Christmas party on December 18. And the Purple Pickle (2223 Market St.) hosted a holiday affair December 19.

For Cabaret, the prospect of opening in the middle of the holiday season may have been a bonus, or a hazard. There is very little other documentation of Cabaret, once housed at 936 Montgomery St., which is now a parking lot.

But no doubt some lonely souls were heartened that year, and the yuletide in San Francisco was certainly gay.