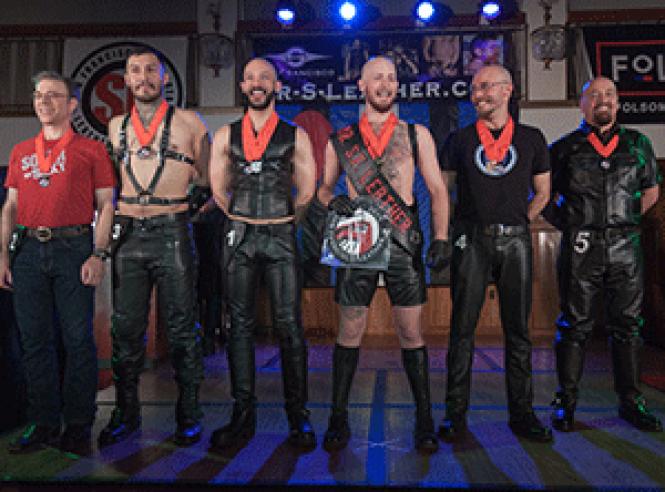 All of the Mr. SF Leather contest contestants pose with the winner, Trevor Black (wearing the sash), after Trevor's win. Photo: Rich StadtmillerÂ

Yet again the fine folks at the San Francisco Bay Area Leather Alliance, along with a small army of dedicated volunteers and supportive sponsors, produced their Leather Alliance Weekend on March 5-8. The Leather Alliance is a nonprofit organization with a Board that reflects the clubs, groups and individuals within the local leather, fetish, kink, gear and motorcycling communities.

The weekend's events provide kinky locals, and those visiting our wonderful city, a range of education, entertainment and socializing opportunities. Each year they seem to top their previous year efforts and this year was no exception. We're so lucky to have such an organization in the Bay Area.

Ava Schmidt served as the Chair for the weekend with Erik Will, Dahn van Laarz, Angel Garfold, Jessie Vanciel, Ray Tilton, Jim Remer, Rachele Sullivan, Mark Ingham and Beth Downey also serving in various capacities on the weekend's 2015 organizing committee. They were assisted by an army of dedicated volunteers who together pulled off this marvelous weekend.

I asked Ava why she thought the is an important part of the San Francisco leather and kink scene.

"The is a great way to bring together a large amount of our diverse local community, supporting each other and our businesses," she said. "Not only do we get to watch great (need I say hot !) men compete for Mr SF Leather, it gives us the chance to honor and recognize individuals and groups in our community that have given so much over the year(s)."

The weekend started on Thursday with a PrEP Panel at Mr. S Leather. On hand to answer the audience's questions about PrEP were Eric Paul Leue, Mr. LA Leather 2014 and renowned PrEP activist, Charles Fann of the San Francisco Department of Public Health, Dr. Robert Grant of the SF AIDS Foundation, and Scott Wiener, SF District 8 City Supervisor. It's great that the Leather Alliance chose to offer this informational session on this very important and timely topic.

One of the main highlights of the weekend is the Mr. San Francisco Leather Content. As has become customary, Mr. S Leather generously hosted the contestant meet and greet, a casual social mixer that also serves as the first public introduction of some of the event staff as well as the contest MCs, judges and contestants. The meet and greet has become one of my favorite events during the Alliance Weekend because it's such a relaxed social environment.

This year's contest MCs were introduced and both were new to the contest MC duties. They were Don Mike, well-known Los Angeles leather community personality, and Pollo Del Mar, who was dubbed the "Drag Queen of All Media" by Huffington Post.

After the meet and greet the contestants and anyone who cared to join them embarked on a bar crawl that had them visiting the Edge in the Castro and then the Powerhouse and SF Eagle in SoMa.

In terms of community attendance, the Mr. SF Contest on Saturday night is the certainly the main event of the weekend. I've attended Mr. SF Leather contests for many years and this appeared to perhaps be the most attended contest I've seen. The room was certainly packed with an array of leatherfolk and kinksters clad in their finest fetish gear.

Contests of the size of the Mr. SF Leather contest don't happen easily. There's a huge army of people behind the scenes making it happen. While this list doesn't include all of the many volunteers working the contest, here were some of the key contributors.

The MCs, Pollo Del Mar and Don Mike, were both extremely entertaining while keeping the proceedings moving along. I particularly liked when Pollo left the stage during a break to emerge as his handsome male self later out of drag, donning a stylish leather outfit created by Troy Anicete.

Kippy Marks opened the contest with fantastic violin renditions of the U.S. and Canadian national anthems. Another crowd-pleaser was Peter Feliciano, a singer and songwriter extraordinaire, who brought the crowd to its feet with a great performance mid-way through the contest's proceedings.

This year's contest was impressive not only for the huge audience attendance, which says to me that we continue to have one of the most vibrant leather and kink communities of any city in the country, but also the quality of the men running for the title. Every contestant did themselves and their respective sponsors proud.

At the end of the night, Trevor Black, Mr. Daddy's Barbershop Leather, emerged victorious as the new Mr. San Francisco Leather with Daniel DeLage in second place and Christopher Humphreys in third. The contestants chose Gerald Borjas to receive the Brotherhood Award.

Trevor not only won the Mr. SF Leather title this year, but he broke a record as the youngest winner, a record previously held by Ray Tilton. At age 22, Trevor is now the youngest man to win the title. It certainly takes a tremendous amount of poise and confidence to win the title at such a young age and he displayed both during the competition.

I asked Trevor why he ran for the Mr. SF Leather title.

"Time has passed since, and my experience and confidence has grown. I knew I was capable of being a voice for those who are like me. In an effort to step forward for our community, I ran for Mr. Daddy's Barbershop Leather, and ultimately I attained the title of Mr. San Francisco Leather. I'm honored to represent our city!"

As for what unique things about himself that Trevor brings to the title, he offered this.

"Being a gay man is one thing. Being gay and weird is another. If being me stirs the pot of conversation, then I've done my job. I fight for what's right in the world, and I'm not afraid to be myself. My mission is to spread acceptance and support. Always be yourself, and know that you can speak to me with the utmost confidence.

"From my age, to my drag [Black is also known as drag performer Jem Jehova], to my kinks, I've always pushed the boundaries of what's expected from society, and I have ceased to apologize for it. I'm happy to represent for everyone."

During the contest, Ray Tilton announced that this would be the last year he would produce and direct the contest. Next year the contest will be overseen by Nile Eckhoff.

I asked Ray what he found to be the most rewarding aspects of his time working on the contest.

"Without a doubt, the two most rewarding things have been working with so many amazing contestants over the years that have," he said. "They continue to represent, every aspect of our leather scene and community, and how the mentorship program has worked to include the same, watching them grow and become a part of the present and future of our diverse definitions of what leather is."

This year's Lenny Broberg Award, given annually to someone who has consistently dedicated time and effort to helping with the contest, went to Erick Lopez, a popular bartender at The Edge bar and a truly dedicated leather community member.

On Sunday, the Community Awards Brunch was held at Beatbox. Local people, clubs, organizations and events were honored with various awards to single out their valued contributions to the local leather community.

The weekend closed out with a dance called Compound, with Demetri Moshoyannis as the DJ, at the new club, Oasis. Years ago the Oasis site was the home to the Compound, a well-known dungeon play space, and I remember it fondly. I must say that the owners and staff of Oasis have done an amazing job with the space and it was great of them to provide a dance venue for leatherfolk wanting to end the weekend that way.

Again, bravo to the people at the Leather Alliance for providing us with such a great weekend.

Race Bannon is a local author, blogger and activist. You can reach him through his website, www.bannon.com.