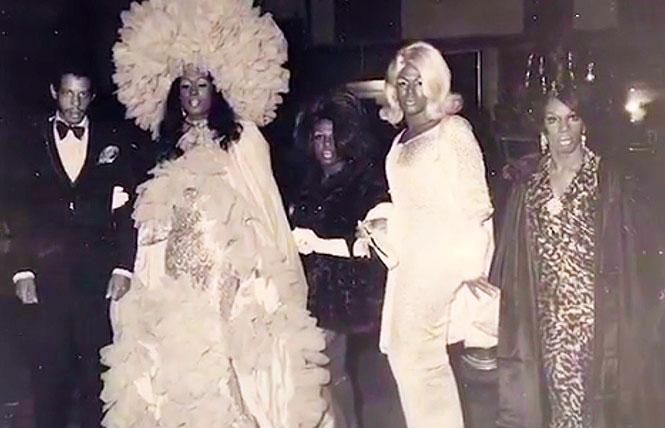 History sometimes seems ruled by events with unintended consequences. That certainly is the case with the Mardi Gras Ball at California Hall, which happened on January 1, 1965. It's an event that's been called 'San Francisco's Stonewall,' a name that's a bit misplaced.

What the two events share in common, however, is an out of control police force that couldn't anticipate the results of their actions. 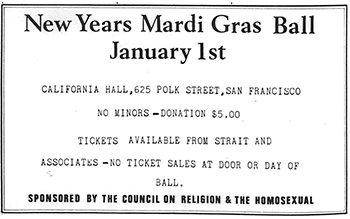 The Council on Religion and the Homosexual (CRH), who sponsored the ball, was an organization formed out of a conference between ministers and homophile organizations in May, 1964. Liberal Christian ministers from the Episcopal, Methodist, Lutheran and United Church of Christ denominations formed the organization with lesbians and gays from the Daughters of Bilitis, Mattachine Society, Tavern Guild and the (also newly formed) Society for Individual Rights.

The purpose of the organization was, according to brochures distributed by the group, to promote a "continuing dialogue between the religious community and homosexuals" and "disseminating accurate information about human sexuality." 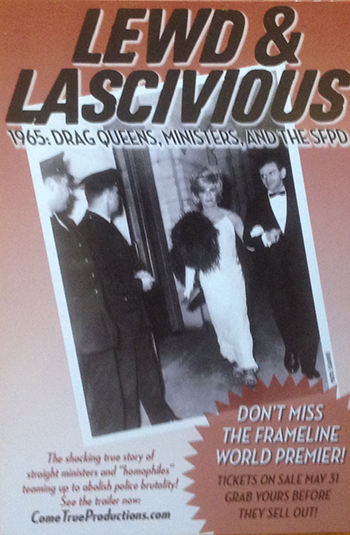 Jallen Rix film Lewd & Lascivious can be seen at http://doctorrix.com/lewd-lascivious-movie/

It was the first organization in the U.S. to use 'homosexual' as part of its name. The ball was, at least in part, to celebrate the incorporation of the organization.

In an attempt to prevent conflict with the police (and arrests), Rev. Cecil Williams and Rev. Ted McIlvenna, who were part of the organization, met with them and attempted to get assurances that the ball would be allowed to go on.

Although police eventually did issue a permit, Rix's documentary points out that they subsequently contacted California Hall to attempt to get them to cancel the event. 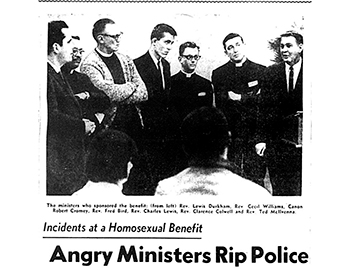 On the night of the ball, the police showed up with two patrol wagons, seventeen uniformed officers and around thirty plainclothes officers, according to Christopher Agee's book Streets of San Francisco. Rix's documentary notes that the police had both still and motion picture cameras set up and took photographs of everyone attending the ball. Because of the police harassment, out of 1500 tickets that had been sold for the event, only around 500 people braved the police to attend the event.

Once the ball began, the police entered the hall repeatedly demanding to do inspections. They were allowed to do this twice in the company of members of CRH. 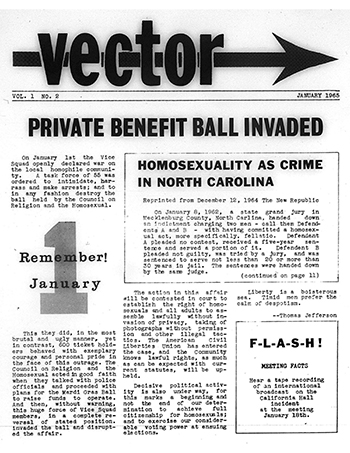 Cover of Vector Magazine after the Mardi Gras Ball

But by 10pm, the doors swung open and a crowd of police entered the hall. They were met by Evander Smith and Herb Donaldson, who were lawyers that CRH had on scene in the event of police harassment. The lawyers asked if they had warrants and what their purpose was at the hall. As a result of this, Smith and Donaldson, as well as another lawyer and a ticket taker, were arrested. Two men were also arrested for dancing together.

After the arrests, the ball began emptying out. Rix's documentary reveals that ministers who brought attendees out of the hall to safety were also threatened with arrest.

In David Weissman's documentary, Conversations With Gay Elders, Paul Chin discusses smearing salad dressing on his car window so that he could conceal Mel Domingo, who was in drag, in his
car as they left the ball.

The end of the Mardi Gras Ball was not the end of the story, however. The following day the ministers held a press conference and it was covered the next day in the San Francisco Chronicle with a headline, 'Angry Ministers Rip Police.' 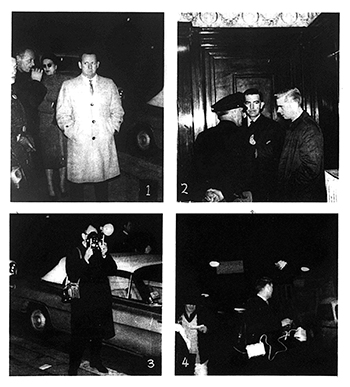 On January 8 and 12, letters from married heterosexual couples who had attended the ball decried the behavior of the police. The three lawyers and the ticket taker arrested at the event went to trial, which was heavily covered by the press. Public opinion was turning against the police.
That was the least of their worries, however.

The ACLU defended the accused at trial, which generated more press. And Judge Leo Friedman instructed the jury to find the defendants not guilty. He further demanded that the police turn in all photographic and motion picture evidence to be destroyed. And finally he offered to accept counter charges from the defendants. The CRH filed a countersuit for $1.5 million (it was settled a decade later for $50).

The trial, the press and the subsequent lawsuit had the effect of chastening police so that they were much more careful with regard to gay events, and, to a certain extent, gay bars. What had started as an attempt at outreach and integration with LGBT people from a group of ministers had an effect on culture throughout the city.

The Council on Religion and the Homosexual continued their work for at least two decades after the Mardi Gras Ball and Rev. Cecil Williams work with the LGBTQ community and other underserved communities in the city continues to this day. I would suggest that the Mardi Gras Ball at California Hall is not San Francisco's Stonewall, but part of the reason we didn't need to have one here.


The author would like to thank Jallen Rix, David Weissman and Glide Memorial for their input on this article.