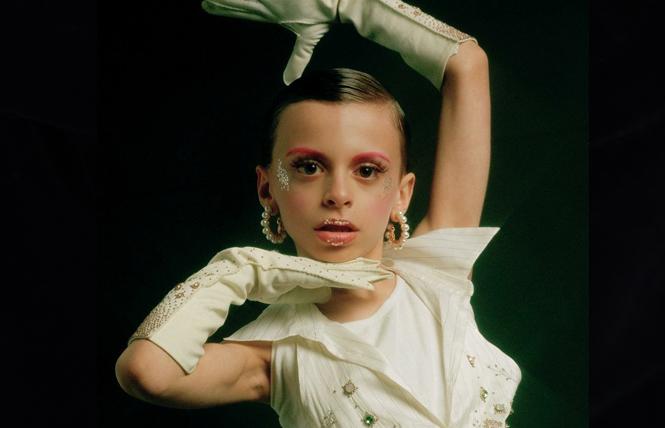 Desmond Napoles, aka Desmond is Amazing.

He's only eleven years old, yet Desmond Napoles has already made a name for himself with appearances at New York's famed Wigstock, and cutting the opening ribbon at DragCon NYC with RuPaul. Performing on queer stages as Desmond Is Amazing, the young man has already declared himself gender fluid, and says that he's "a boy who enjoys dressing up as a girl." Desmond even creates his own costumes with the help of his supportive parents.

People are responding quite well to Desmond, delighted to see a child who is accepted and is able to be who he wants to be.

"People should be able to dance, sing or dress in anyway," is Desmond's motto. "You can express yourself however you want. It doesn't matter if you like jazz or rap, ballet or ballroom, dresses or suits. You can just do you. I like Diana Ross. Maybe you do, too."

Heklina recalls working with Desmond at Wigstock, and found him "hilarious."

"His mom too is such a stage mom," Heklina tells Bay Area Reporter. "I kept wondering what it was like for them to experience the backstage bitchy drag-queen minefield there at Pier 17. I also thought it was hilarious that day that he was taking a nap while someone was doing his make-up; already such a diva!"

Asked how he became aware of his sexuality, and his gender fluidity, at such a young age, Desmond said, "I would always have crushes on other boys and I thought it would be nice to have a boyfriend someday," he said. "Last year I came out to my mom. I feel that I am gender non-conforming, because in drag I feel like a boy in a dress and a girl with short hair at the same time. I feel very androgynous."

Like any drag diva, Desmond looks up to his drag elders for inspiration.

"I am inspired to do drag because it is a way to express myself and to create my art," he explains. "I have so many drag role models because each of them has something different, so it's hard to pick a favorite. I guess my role model favorite would have to be RuPaul. I first saw drag when I was like 2 or 3 years old and my mom was watching RuPaul's Drag Race. I was playing with my toys and just stopped and wanted to watch it with her. I thought the queens were so beautiful and amazing."

One of the things Desmond has become known for is creating his own colorful costumes. He puts a lot of thought into what he wears, often getting help from his mom.

"I am really inspired by a lot of fashion designers so I am always watching old fashion shows from the '90s on YouTube," he said. "I just take inspiration from them and sketch out the ideas in my fashion templates book. My mom and me put the outfits together. I also go to Out of the Closet LGBTQ thrift store and find clothes to mix and match. I hate fast fashion."

Desmond is also an advocate for LGBTQ youth, offering other kids encouragement.

"I performed at New York City's Youth Pride and Pride Fest," he recalls. "I loved performing at Youth Pride the most, because it made me so inspired to see the crowd of LGBTQ youth smiling and cheering. I do a lot of public speaking and events for LGBTQ youth. My motto is, 'Be yourself, always.'

Desmond doesn't want to say exactly what he'll be doing at Mother —he prefers to surprise people— but he did say that he likes to perform songs from the '90s. "I like to make people just be blown away, I guess," he said.

Ever busy, Desmond has announced that he plans to write a children's book on how to express yourself, and he'll soon be releasing a song. He hopes people will follow his example and be who they are.

"Just pay the haters no mind, because they will never be as fierce as you and I," says Desmond.