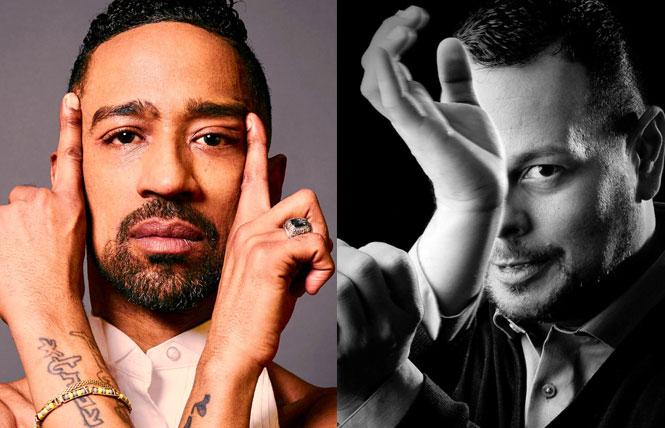 San Francisco Pride is poised to get the biggest infusion of movement, outlandish style and fabulosity, with two of the most enduring men of color in LGBTQ culture.

Jose Gutierez Xtravaganza and Luis Camacho Xtravaganza, known as two of the shining performers in the 1980s ballroom and dance community of New York, are known for their work with Madonna in her iconic music video, "Vogue," her tour and the accompanying 1991 documentary film Truth or Dare.

The 2015 documentary film Strike a Pose included both dancers, and covered their lives since those iconic music video days, as well as those of their colleagues, including Gabriel, who died of AIDS, and two others who came out as HIV-positive.

Since then, both men have continued to inspire dancers and artists around the world. The two will participate in San Francisco Pride as celebrity grand marshals.

We spoke via bi-coastal chat, to talk about past, present and future accomplishments and goals, as the most sterling representatives of vogue culture reaches new hew heights of pop culture visibility on the FX network's newest series, Pose, about the intersection of 1980s ball culture and Manhattan's power-hungry elites.

Jose: Before you ask even one question, I want everyone at the Bay Area Reporter to know that I loved the interview that you and I did last year! I was just very flattered and humbled. It was a beautiful article. You all made me feel like a pioneer. People have told me this before, but your article really hit home for me.

Cornelius: Thank you! With all of your accomplishments in LGBTQ culture, as two of the most iconic dancer/choreographers, has any city given you and/or Luis any serious status in any of their Pride parades across America?

Jose: I've walked with The House of Xtravaganza in New York City Pride, but never with Luis or on my own.

Luis: That's why we're so happy to do this Pride together. No shade on anyone, but SF Pride, I've noticed, always moves the LGBTQ community forward. 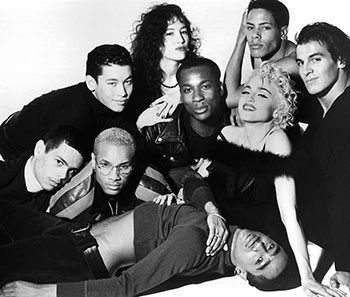 Luis Camacho (lower left) and Jose Gutierez (lying down) in a promo shot for Madonnas Truth or Dare film.

I'm sure that San Francisco Pride will be very happy to hear that. Luis, tell me the very first that you met Jose.

Luis: We were both students at the High School of Performing Arts. He was just this beautiful little guy and he is my brother. He is forever emblazoned in my life. I love him!

Jose: I must say the same; our relationship has been a blessing.

Luis, tell me how you felt the first time you saw vogueing.

Luis: I felt like a child who got his first glance at what would become his favorite toy.

Luis, tell me how you joined The House of Xtravaganza.

As opposed to Miss Venus Xtravaganza, whom you all just hijacked into the house (Laughter). Let's discuss a difficult topic: cultural appropriation.

Jose: I understand what you're talking about. I see it going on ... everywhere, most notably in last fall's Gucci ad campaign. I'm very territorial about vogue culture. I teach it all over the world. In the past year, I've been to Cuba, Japan and Brazil. I always inform my students of the culture, not just the movement. LGBTQ people of color have created a culture that took in people who were thrown out onto the street by straight people. We loved, nurtured and supported them. What you see in vogueing is real pride, beauty and elegance, created out of struggle and hardship. People should know and acknowledge it.

Luis: As far as vogueing is concerned, I want to see LGBTQ people of color working in a situation that is authentic for them and makes them shine. There's nothing wrong with a gay, black man vogueing in a print ad campaign and, yes, he should wear Gucci, vogueing for Gucci. Why not? 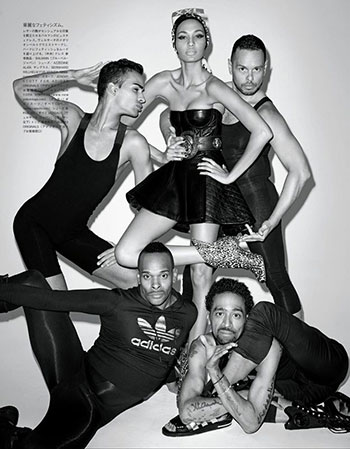 Thank you, guys! How do you feel about "a death drop"?

Jose: The "death drop" was a feeling that someone performed in the moment, like an exclamation point. That was something that came over them, but it's nothing to which my generation aspired, as a feeling of elegance. The "death drop" is what the "new school" is all about.

However, you guys were a very important part of a serious artistic movement when people used fine art techniques to sell commercial products. Grace Jones comes to mind, as does Madonna. Bob Mathis-Friedman, a gay cultural anthropologist, made the observation that you, as an entity, made "gay subtext is now text."

Jose: Wow, I'll have to hashtag that! Bob is brilliant, and I'll have to agree. Some of the other dancers with whom we worked on the Blonde Ambition tour were still in the closet.

Regarding the iconic "Vogue" video, were you aware of the legendary fashion photographers whom the video referenced? The two photographers (Horst P. Horst and Irving Penn) were both still alive when the video debuted.

Luis: I was not aware of the photographers. We just worked on the dance aspects of the video, and I'm so happy to hear that they loved it.

Let's discuss the Rock The Vote campaign that you filmed with Madonna. Did you two have any idea that you would be the very first openly gay men of color to create a national ad campaign, encouraging people to vote?

Luis: No, we just put on those little booty shorts and did it (Laughter).

Jose: I wanted to encourage people who are LGBTQ and of color to vote, and I thought to myself, "Yeah, I'll stand next to this white woman and encourage people to vote. No problem." The LGBTQ community needs to vote every chance that they get! 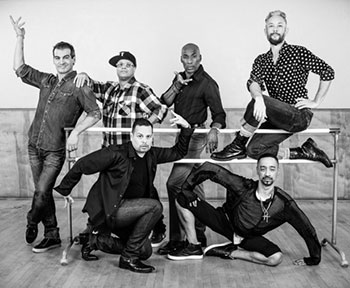 At the height of your work with Madonna, who was the most iconic person you'd ever met?

Luis: I must agree, Elizabeth Taylor. She's the queen of cinema, as far as I'm concerned. I must also say that a highlight of my career, Queen's English, the record that Jose and I did and was a huge thrill for me. I work with elderly people, and one of my elderly friends sang it to me recently. That was an incredible moment.

Jose, let's discuss your latest work. Recently, I saw the record-breaking documentary The Gospel According To Andre, which also showed the teaser for the FX series Pose. I see that its creator, Mr. Ryan Murphy, is not taking any prisoners!

Jose: Oh, my God, I'm dying to see Andre's documentary! He's the most influential man in fashion! The fact that he's black makes it all the more thrilling! Currently, NYC is all about Pose and that documentary! The ads for both are everywhere! The show is going great, and I'm working very hard on this project.

Jose: I'm living my history. It's very surreal and emotional for me.

In my opinion, the show's breakout role will be that of Damon Richards (aka Damon Evangelista), played by Ryan Jamaal Swain. My spies tell me that that role was based on you, Jose. Talk to me.

Jose: I understand that there are people on the Internet who are saying that. Let me say two things. First, Ryan Jamaal is a wonderful actor, with a wonderful spirit in the role, with whom people will identify. But, is the character based on me? Maybe. Maybe not. You'll have to see how the story develops.

Commentary is going around that it's sad that the LGBTQ community of color is not in the position to tell their own stories, and that a white man (Ryan Murphy) is not qualified to do so, that Pose would have been better told by a gay person of color, like director Lee Daniels, who has stated that he was inspired to direct after watching the ground-breaking documentary, Paris Is Burning. Any thoughts or opinions about that?

Jose: I think that the show will have some surprises for everyone. Ryan has done, and continues to do, his homework and research, utilizing LGBTQ people of color in front of and behind the camera. Keep watching.

One of my bisexual relatives said that he's not interested in watching the show. He thinks that it's too trans-identified, and that narratives about masculine gay and bisexual men of color threaten everyone, and never receive enough support and/or attention.

Jose: I understand how he feels. I hope that he will give the show a chance, and not be so quick to tune out. The show is breaking new ground on a lot of levels. I just hope that the LGBTQ community will give it a shot.

Looking at the trans characters, I cannot help but think of Octavia St. Laurent, and that it was her dream to be in the situation in which these women now find themselves.

Luis: Octavia was an impossible beauty! I've never seen anyone in the trans community, anywhere, who looked as beautiful as she did.

Jose: Thank you! "Impossible beauty" sums her up perfectly! She was beautiful, inside and out. This generation's trans community has it easy, compared to what I saw her endure. The community really should give her the respect that she deserves.

There's a lot of talent on the show! Billy Porter comes to mind.

Jose: Billy is an amazing artist! He just comes in and wrecks the place! He, too, has done his homework and research, and he is always totally prepared.

Please tell Ryan to put Billy in the studio, and have him create the next big timeless gay anthem, connected to the show. Billy can sing his natural ass off, bottom line!
Gentlemen, what do you think will be the evolution of vogueing?

Luis: That's a very serious question. I want people to know that everything that I do is based upon authenticity. That's what I want people to both know and see. On my tombstone, I want it to read, "He did that!"

I want the two of you to know that you are shining examples of what it means to be gay men of color, and that there are people, all over the world who've seen what you've done and continue to do. Happy Pride to both of you! I love you!

Jose: It's been an honor! Thank you so much. I love you, too!

Luis: I hope to see you during Pride. I've never met you, but I must say that I love you, too. This has been quite an experience. Thank you so much!