Every day is a Pride Parade 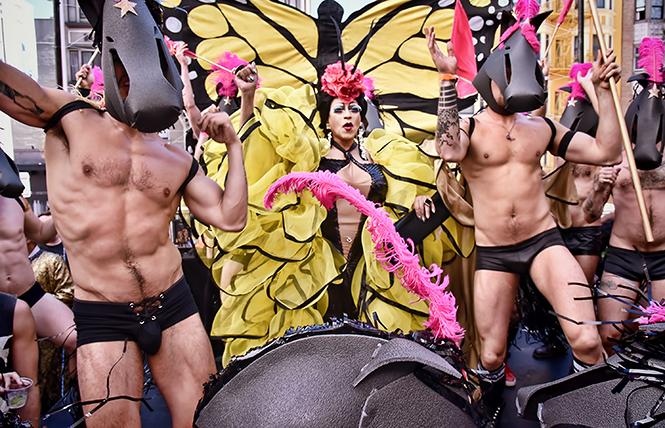 I remember the first time I marched in the San Francisco Pride Parade. It was pure magic stepping off the curb and planting my foot on Market Street. The heavy weight of not being out to everyone in my life had been lifted off my back and I felt like I had finally set myself free and was floating way up high in the clouds. I smiled the entire day.

Since then, every day has been a pride parade for me. I'm either busy being fabulous, celebrating being queer, fighting for LGBTQ rights, or raising funds in support of our community. A lady's work is never done.

But now, more than ever, is when things really start to go at a maddening pace. The first Pride party I threw was in 2003, making this year's party our quindecennial anniversary. My idea then was to create a safe space for my friends to come together.

It was a time when the San Francisco art scene was exploding with creativity. Everywhere we went, so many exciting things were happening, but not much of it was represented on Pride Sunday. A riot is what started this party and my friends and I were definitely not interested in what was fast becoming the commercialization of Pride.

That first party was beyond joyful and we felt like we had found our space. A year later, Mark Leno officially proclaimed June 2004 as Lesbian, Gay, Bisexual, and Transgender Pride Month. He urged all residents to join in celebrating the accomplishments and contributions of LGBT people as well as advancing the cause of equality of lesbian, gay, bisexual, and transgender people. This was a positive step of inclusion for our community. 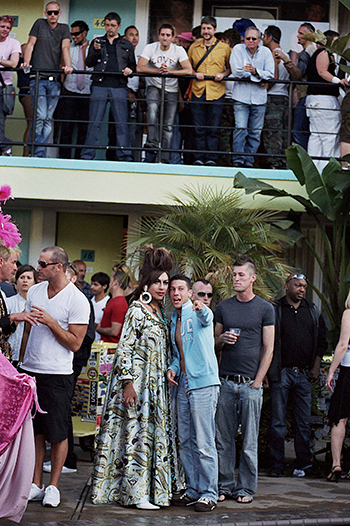 Juanita MORE! and guests at the Pheonix Hotel for her 2004 party. photo: Daniel Nicoletta

Each year I have taken great pleasure in seeking out some of our community's most needy organizations as beneficiaries. We've raised hundreds of thousands of dollars in support of their important missions.

This year I've chosen TRUTH (TRans yoUTH), a joint program between Transgender Law Center and GSA Network - both organizations which I have continually supported over the years. The TRUTH program seeks to amplify the voices of trans and gender non-conforming young people by offering a safe place to share struggles, learn empathy, and build public understanding.

40% of trans individuals who responded to a 2015 survey shared they had attempted suicide and 77% of trans youth shared they had experienced harassment or discrimination in school. TRUTH is allowing these youth to lead the way to end the isolation and stigma that trans youth face so these statistics can reach zero. These are the youth of our future and they have the power to change both minds and policies through their stories.

To add a cherry to my ice cream Sunday, I've decided to throw not one but two parties this year! I really do want to spend the entire weekend with you! The new party is on Saturday, June 23, the night before my now legendary Sunday daytime event at Jones. It takes place at the former Carousel Ballroom, which hosted big bands in the 1930s and '40s. When that era faded, a new style of music was ushered in, featuring Ike & Tina Turner, B.B. King, Chuck Berry and many, many more. 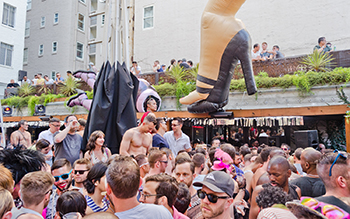 Bill Graham took over the concert hall in 1968, opening its doors as its most famous incarnation The Fillmore West to the likes of the Grateful Dead, Jefferson Airplane, Janis Joplin, Santana and countless others and also where Aretha Franklin recorded her legendary live album in 1971. So when I first walked into the venue, I knew that I was in a very special place where decades of dancers, musicians, and performers spent many nights having a good time. It's magical!

Pride month is a time to reflect, remember, celebrate and unfortunately still fight for our rights. The president and his backward administration continue to dismantle LGBT rights in this country. There are 74 countries where it is illegal to be LGBT. In 13 countries, being gay or bisexual is a crime punishable by death.

Sometimes it's easier to forget that we've not always been allowed to be who we are in public. It's easier to relax, go out at night, and ignore the fact that our friends and chosen families are under attack in other parts of the world. A friend recently said that Mark Leno is largely responsible for the entire framework of rights that the LGBTQ community in California enjoys.

I would say we are fortunate here in San Francisco but that's not to say that freedom from discrimination and the freedom to be yourself are still not threatened.

I love you, San Francisco. Let's continue to celebrate our alternative and creative sides and find more ways to share our talents, art, and beauty.