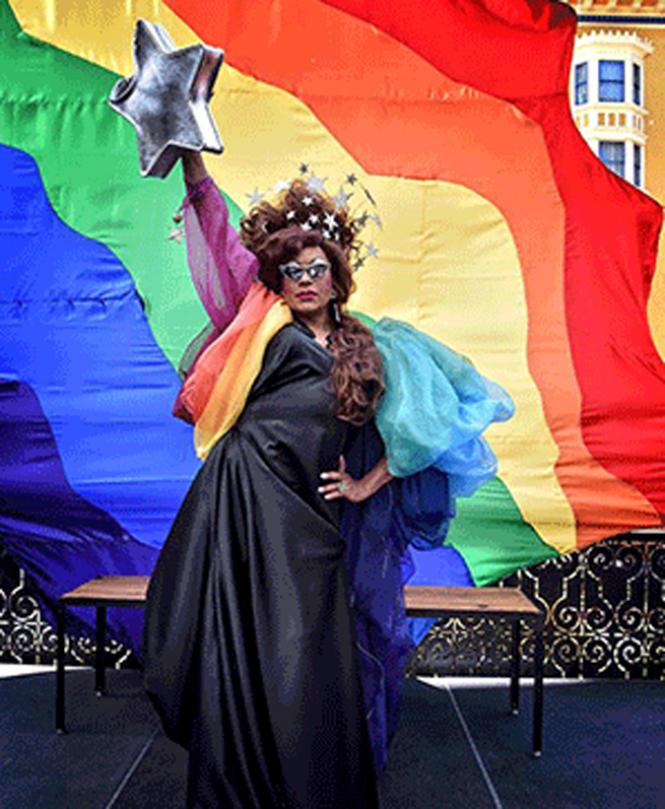 Juanita MORE! will lead a March 10 commemoration of closed gay bars in the Polk district.  (Source:Gooch)

I grew up in the East Bay and as a freshman on my way home from high school, I would pass five gay bars and a newsstand/liquor store that I would slide into once a week and spend my time turning the pages of After Dark, Interview and Penthouse magazines. This is where I learned that San Francisco was queer, Studio 54 was alive and beautiful naked men did exist. I was soaking in an entirely new world that my teachers weren't teaching me. At night I would sneak out of the house after family dinner to cruise the parking lots of the bars where I was too young to get in. By my sophomore year in high school, I was fully committed to dating girls by day and sucking dick by night.

Around this time I met a guy who was a senior at my school; let's call him "Betty." Betty called me "Madge." He also cruised the parking lots at night. One evening he said to me, "You're gay, and I've got a car, so let's go to San Francisco this weekend." We did, and we went regularly thereafter.

Looking back, I realize that he was an amazing mentor. He relished in showing me everything he had already been experiencing in the City. Gay liberation was in full swing. He showed me all of the spots: where the leather daddies hung out, the parks where you could have sex at night, the guys with mustaches, Levi's and flannel shirts called Castro clones, where the drag queens performed, and so on. From the beginning, he taught me it was okay to be gay and that there was an entire world right there just waiting for us.

Polk Gulch was the place to be. It was the place where the community first celebrated its holiest of high holidays, Halloween, and where parades, marches, and protests took place. The streets were lined with gay bars, and by day the storefronts were a menagerie of retail shops that catered specifically to their queer audience. One of my favorites was a vintage clothing shop called Matinee, where I would buy rayon shirts and men's suits from the '40s. There were a handful of sex arcades located within just a few blocks of each other. The last of those queer respite centers closed just a little over three years ago.

Betty easily passed for twenty-one and got into all the bars. There was The Giraffe at Hemlock (the original neon sign still hangs outside, faded and unrecognizable to almost everyone passing by), Rendezvous (now a church), Kimo's, N'Touch (which is now owned by the same people that recently bought the Gangway), Buzzby's, and White Swallow.

In all, there have been a staggering 79 queer establishments along just a dozen blocks of Polk Street since 1950. I got kicked out of every one I entered. It was exhilarating and frightening, never knowing where the night would take me. Betty was smart and always let me hold onto the car keys, which I used to my advantage, courting tricks for romps in the backseat while waiting for him to get back and drive us home over the Bay Bridge.
Juanita MORE! on the Gangway's ice machine in the early 1990s. photo: courtesy of JM!

By the early '90s, the neighborhood had changed. I moved into the apartment I live in now --it's probably the one I'll die in-- just two blocks east of Polk Street. The AIDS crisis had taken many lives, and many of the bars as well. The stores that had inspired my weekend shopping sprees as a teenager were gone, as were many of the symbols of San Francisco's gay revolution. During the day, the vibrant gay scene was replaced by a handful of young, straight guys hooking for quick dope money off of elderly queer men.

For a moment, things picked up and it became vogue to throw a party in one of the still-existing gay bars that were still hanging on in the neighborhood. The Gangway had its share of one-offs and monthlies, though the regular patrons never really embraced them.

The Rendezvous turned a blind eye to the insane shenanigans that young club promoters were dreaming up, like the "live art" that consisted of a friend sitting in a kiddie pool filled with spaghetti and red sauce, while I leaned over and whispered through a forced grin, "Don't you dare touch my couture with that mess."

The Motherlode was as busy as ever, in the space now occupied so well by Diva's. I got into the swing of things and staged a few drag shows at Kimo's, which closed down in 2011. For years, after a night out, I'd end up at the Grubstake. It was my favorite late night spot ­-where I've eaten just about everything on and off the menu- and my photo still hangs over the first booth where it's been for over 20 years.

In February of this year, the Gangway closed its doors for the last time. There was no ceremony, no goodbye party, hardly any chance for queers to gather one last time under its iconic façade, a ship's bow jutting out of the building, stuffed with men and boys charting a course for a more tolerant and welcoming world.

Cleve Jones and I recently took a stroll down Polk Street, which quickly turned to mourning all of our old haunts. It feels like it's been curtains away for queer spaces for quite some time. There are many people out there fighting to keep them alive, but just as many who shrug those efforts off as the nature of the beast. I don't want to shrug it off. Cleve had a beautiful idea to lay wreaths in front of every storefront that was once a gay bar, and we're going to do it.

On March 10 at 4pm, let's remember Polk Street, and let's reclaim it. Join me, Cleve Jones, the GLBT Historical Society, History is Resistance, the LGBT Center, Lower Polk Neighbors and the Middle Polk Neighborhood Association out front of The Gangway (841 Larkin Street), where we'll begin that procession to lay wreaths in remembrance of Polk Gulch's vibrant LGBT past.

We'll have music, we'll have speakers, we'll have drinks together, and we'll dream of a future that is informed by our shared past.

Whatever comes next, I want it to honor and remember those trailblazers that made Polk Street come to life. And that also means making it an affordable place for queers to live.

I want Polk Gulch to reclaim its queer identity with galleries, restaurants, and retail shops owned and operated by our community. I want San Francisco to be really, really gay again.