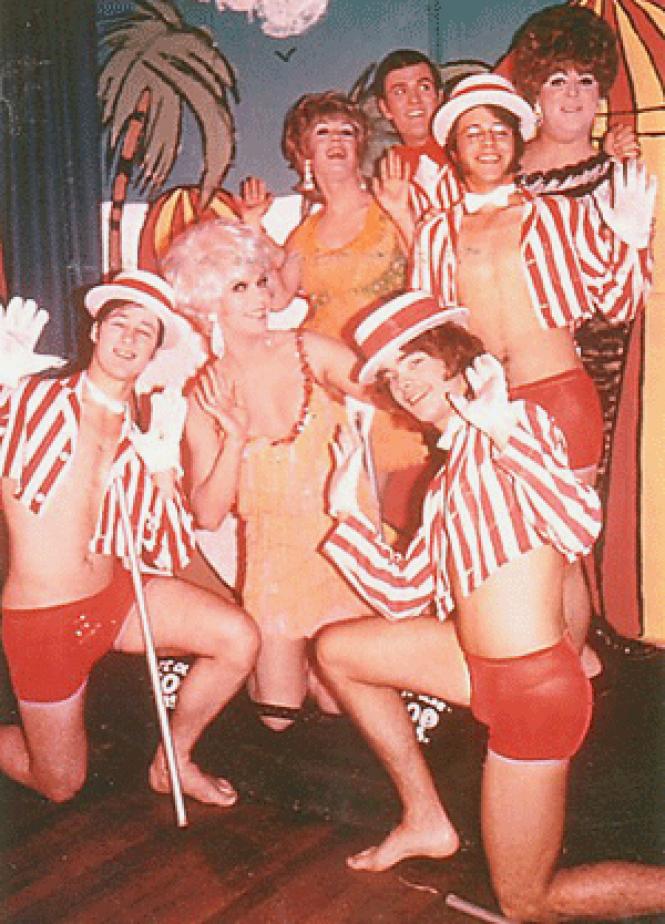 There are rare bars that are popular in one generation and come back a second time. Even rarer is one which has three lives. The 181 Club was such a bar. It lasted from the 1950s to the 1990s and left its mark on three generations.

The person who brought the club into the gay world was a female impersonator with a following as big as any drag star today. Mr. Lynne Carter started performing shortly after returning from World War II. He was known for impersonations of Pearl Bailey, Marlene Dietrich, Bette Davis, Mae West and Josephine Baker.

Years ahead of political concerns, he performed his impersonations of African American performers by using his voice, and not cheapening his act with blackface.

Baker was so taken with him that she gave him three taxis-full of Balenciaga and Dior gowns. He performed at the Beige Room and Ann's 440 in North Beach starting in 1951.

In 1954 he decided to try his hand at opening his own club. With the help of the two women who ran Ann's, he applied for a license, but Chief of Police Gaffney objected.

Though he received raves in the Examiner's "Around Town" and the Chronicle's "After Night Falls" entertainment columns, the Chief of Police protested to the state liquor commissioner both Carter and the women from Ann's "were associated with a bar frequented by homosexuals" (Ann's 440).

Over a decade and a half before Stonewall, Carter won a victory, got his license, began performing at the 181 Club, on 181 Eddy Street, at the end of August 1954, and continued through October, when he began booking jazz acts at the club.

Carter decided by 1955 that the life of a club owner was not for him and went on to join the Jewel Box Revue in 1958, and to perform at Carnegie Hall in 1971. But by then the die was cast and the 181 was drawing a gay crowd.

Sammy Corenson took over operation of the club as an after-hours "Breakfast Club" (as afterhours spots were then known) in 1960. Corenson was the past president of Show Folks of America. Though one may not immediately think of gay clubs being associated with the circus, it's helpful to remember that Vicki Marlane (who would appear with Pat Montclair at the 181 club in 1971) started performing at the circus as the Alligator Woman.

Corenson tried out several schemes to draw crowds to the bar, including Swim Contests in 1965 (the year after the Swim became a popular dance) and topless dancers.

By 1967, the club was advertising in Vector and offering female impersonators (including future Empress Pat Montclair) and both gogo and topless dancers.

On May 5, 1968, the club was raided with four others. In an article entitled "'Breakfast Club' Raid Hearings," the Chronicle reported charges ranged from selling liquor without a license to running a disorderly house. The article also reported "Some of those arrested were homosexuals 'in drag' (wearing women's clothing)."

On August 17, 1971 when the club appeared in the Chronicle, it was for a more festive occasion. In an article entitled "A Glittering Gay Wedding," it was reported that Pat Montclaire "a 30-year-old female impersonator at the 181 Club" was marrying Terry Black at Glide Memorial Church. Terry was quoted as saying, "I love Pat, it's that simple. I think we can be as happy as any straight couple. To me she is a girl. She treats me like a husband."

The 181 wasn't only making a splash in the straight press. In 1971 the Bay Area Reporter's Donald McLean fairly gushed about the show:

"The show itself is the star - not any one performer. There's a wonderful number called "American Flag On The Moon," with tap-dancing lady astronauts and semi-naked moonmen."

But by December 5, 1971 it was all over. In a cover story in the B.A.R., it was reported that all of the female impersonators were being let go and the bar would only have gogo boys. Or as Pat Montclaire put it, "It took the management six years to decide I'm a bad act now, I'm just a star in exile."

The gogo boys were featured for a few years afterward and there were still listings for the club in the gay press. But by the early 1980s, both the club and the neighborhood had seen better days. It was the perfect time for a revival.

Greg Cruikshank and Kim Danders began renting out the club in 1982. Cruikshank told me, "We wanted to use the venue for back-to-back Thursdays to celebrate Arturo (Galster) and Esmerelda's birthdays. Those two nights led to a regular weekly Thursday night."

The 181 Club was a nightclub again. It featured live acts such as Galster's Patsy Cline and the Memphis G-Spots, Leo Ford, Jane Dornacker and Carol Doda and Ru Paul.

The reborn 181 Club also gave Marc Huestis a place to stage Naked Brunch on weekends in 1983 and '84.

The Chronicle billed it as "a bizarre hybrid of musical spoof, film parody and drag show." It was all that and more than that, it was wildly popular. The show sold out and was so packed that people fainted in the audience.

It wasn't all glamour, however. In an excerpt from his forthcoming biography When You Wish Upon A Star, Heustis related what the club was like during the day.

"We soon figured out that the Club 181 was really a dump. Though at night it sparkled, during the day it stank. When empty, you were immediately greeted by a rather putrid odor. 'What's that smell?' We all gasped in unison."

Marc said that it would later become evident what the smell was.

In a 1993 article entitled "Years-Old Corpse Found Near Favorite S.F. Police Haunt" the Chronicle revealed that a body was found in the ceiling of the club when wiring repair was being done there.

Through the last sixty-plus years, there are few spots in the city which have lasted as long or had as varied a life in the LGBT community as 181 Eddy.


The author would like to thank Marc Huestis, Greg Cruikshank and Tom Moore (of www.gayinsacramento.com)