Lenny Mollet — The Godfather of Chez Mollet and other bars 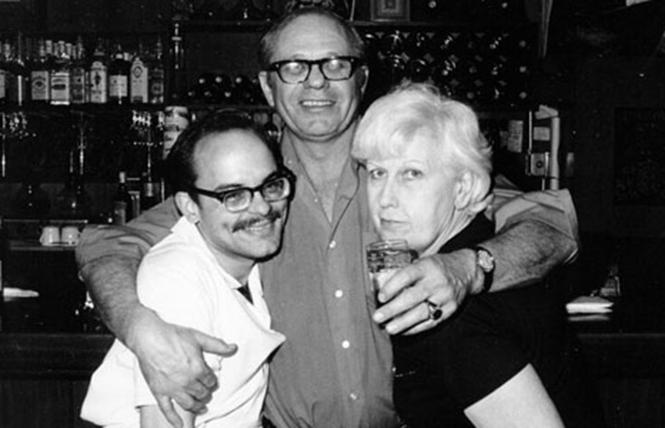 Lenny Mollet was a Grand Duke of the Ducal Court, the president of the Tavern Guild during orange juice boycott and a candidate for supervisor, but he was much more than that. He was part of a generation of veterans who moved to San Francisco after World War II, one of a generation of gay men who fought for a place of their own in the city. He owned a gay bar in San Francisco a decade and a half before the Stonewall riots. 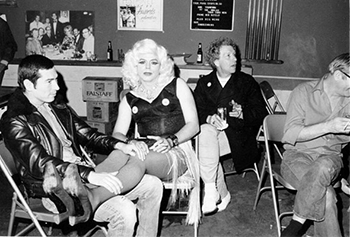 Mollet was born on Guernsey in the Channel Islands in 1919 and emigrated with his family to the United States in 1923. He enlisted in the Navy in 1945 and served until 1950, when he shipped out from Guam to arrive in San Francisco.

In 1954 he bought his first bar, Lennie's 36 (36 Embarcadero) with a business partner Robert Bivens. Lennie's 36 got into trouble with the Alcoholic Beverage Control in June 1955, when it was caught with four other bars in what the Examiner called a "crackdown against bars catering to sexual deviates."

This was part of the first crackdown against gay bars since the State supreme court had ruled in favor of the Black Cat in 1951, allowing alcohol to be served to homosexuals. 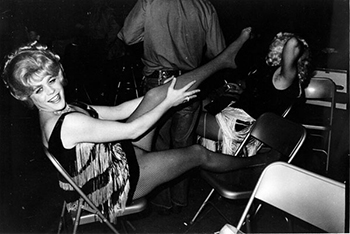 The A.B.C. argued the bars were not only serving homosexuals but that "lewd acts of a sexual deviate nature were openly carried on in the premises in plain view of the proprietor, bartenders and the public."

The State liquor administrator cited "a number of sordid instances where persons of the same sex embraced, kissed, petted and danced."

Apparently the license was only temporarily suspended, however, because though the Armed Forces had imposed an off-limits ban on the bar, it was lifted in October, 1955. The bar's liquor license was again suspended for a month in December 1955 on a disorderly premises charge and ultimately the bar was closed in October 1959 for "conditions of immorality." 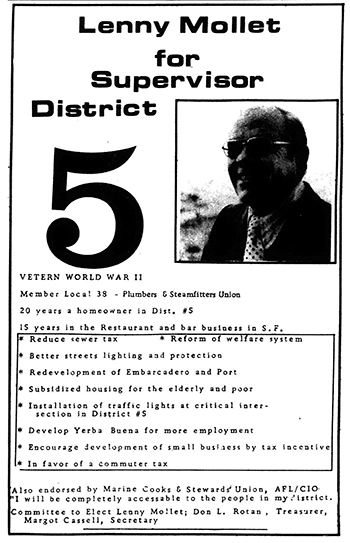 Mollet was down, but hardly out, however.

In 1961 he bought On The Levee (987 Embarcadero) from jazz trombonist Kid Ory. Ory was a well-known musician who played with Louis Armstrong and had performed at Peggy Tolk-Watkins Tin Angel. Ory bought the Tin Angel from Tolk-Watkins in 1958 and changed the name to On The Levee to reflect his New Orleans jazz heritage. When he took over the club from Ory in 1969 Mollet kept the name, and carried part of it with him to 527 Bryant when he opened Off The Levee (later called the 527 Club and Chez Mollet).

It's also worth noting that Mollet did not advertise in the gay press till the early 1970s, so he may have been maintaining a lower profile. What is clear is that both clubs catered to LGBT clientele from the start.

In January 1962 LCE News noted in its Roving Report that Walter Hart (noted female impersonator of Finocchio's fame) was appearing at On The Levee on weekends.

And by November 1966 ARC News (out of Sacramento) noted in an article entitled "Leather Circuit Expands" that for a tour of San Francisco's leather scene, "you might want to start off at the Levee on the Embarcadero for Sunday brunch and cocktails."

The Society for Individual Rights magazine Vector was also available at On the Levee. The bar remained in business until 1973.

Although On The Levee was known as a gay bar where both leather and drag were welcome, Lenny's greater contribution to the community would come at Off The Levee (527 Bryant). He bought the bar in 1965 and for the six years of its existence there is little written about it. In November 1971 the Advocate ran a restaurant review that said:

"Primarily straight for lunch, when it's called the 527 Club (as the large sign out front says) in the evening it's all ours and known as Off The Levee. It is somewhat, although not exclusively, bike oriented."

By 1972 things were in full swing at the club, with a candidate from 527 Club winning the "Miss Cowgirl" contest (as covered in the Bay Area Reporter). Mollet advertised frequently in B.A.R. with early ads noting "We're next to the state unemployment office" (perhaps you'd like a drink after filing?).

Mollet was actively courting both members of the court system and the motorcycle clubs, with an Empress Night and a motorcycle club night. And as this was the era where out LGBT people were not necessarily welcomed home at the holidays, there were holiday dinners as well.

In 1973 Mollet opened the Godfather Room in the 527 Club (he referred to himself as the Godfather). The club featured musical entertainment ("Scotty MacNeil at the organ") and was always festive at Halloween, welcoming buses and giving prizes for best costumes.

Mollet won as Grand Duke II in the Grand Ducal Council for 1975-76. Having been a long-time member of the Tavern Guild, he became President on July 6, 1976. He was central to the guild's boycott of Florida Orange Juice because of Anita Bryant. In April 1977 he told the San Francisco Chronicle:
"Every gay bar in town has agreed either to stop serving orange juice or to squeeze their own California oranges." 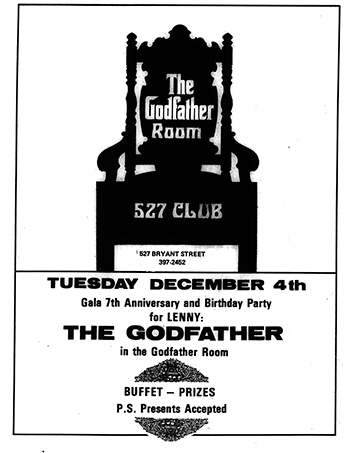 Ad for The Godfather Room.

Instead of serving screwdrivers, Mollet suggested a "Carmen Miranda" with vodka, pineapple juice and a spritz of soda garnished with a California orange slice.

With his success in the court system and the Tavern Guild, it made sense to Mollet to run for Supervisor for District 5 in 1977. Unfortunately, he chose a particularly competitive year, with Harvey Milk and Rick Stokes splitting the gay vote, and Terrence Hallinan running strong as well. In the election where Harvey Milk made it to the board, Mollet limped away with 74 votes.

Mollet's electoral defeat did not dampen his fervor for the gay community, however. He continued to host court events at his club. Upon the end of Patrick Toner's run as International Mr. Leather, he held a tribute dinner for him in 1986.

Lenny Mollet was a force in San Francisco from the 1950s to the 1990s. He bridged the leather and drag communities and stood up to Anita Bryant as head of the Tavern Guild. As a member of the "Greatest Generation," he was a gay man and a veteran who came to San Francisco and opened a gay bar more than a decade before Stonewall. He was not the type of man who waited for society to change. He helped change society.